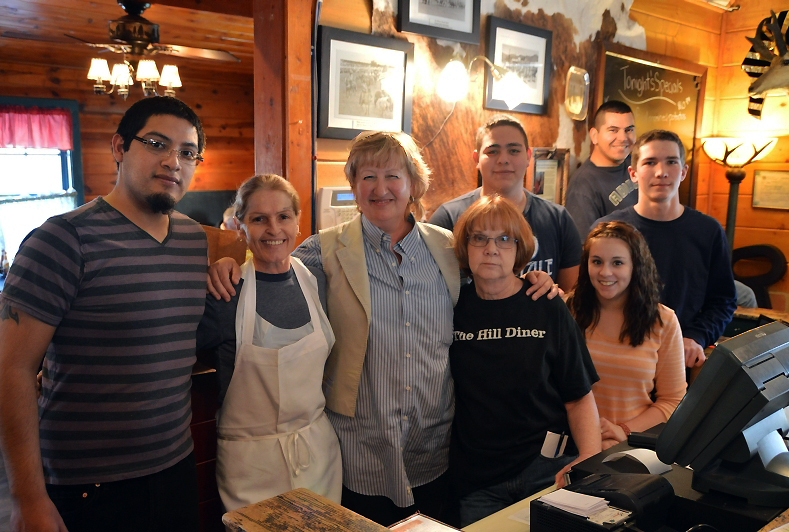 By CAROL A. CLARK
Los Alamos Daily Post
After 25 years, Hill Diner is closing down for good Saturday. The good news is that the most popular menu items from Hill Diner will be added to the menu at the Dixie Girl Restaurant downtown on Central Avenue.

Owner Denise Lane met with the Los Alamos Daily Post to announce she is closing down the restaurant and to ask the community for input on what they would like to see as she merges aspects of Hill Diner into the Dixie Girl, which she opened last year.

She dispelled rumors that she has signed a deal to sell her property to Walgreens or anyone else.

“The property is definitely for sale but no one has signed anything with me,” Lane said. “Also, any sale would be contingent upon the Shriners agreeing because this is about a two acre area and I’m sure anyone interested would want to purchase the entire property.”

The Shriners building is located across the parking lot from Hill Diner.

Lane said it has been extremely difficult for her to finally reach the decision to shut the doors at Hill Diner.

“We are two old ladies now … we’ve been together for 25 years and we’re both tired,” she said. “This building is over 70 years old and it was never meant to be a restaurant. It was an Army barracks and every year she and I break down just a little bit more. This year was kind of the icing on the cake in that it’s costing me a fortune – the utilities cost more each month than my mortgage. I’ve replaced the floor four times and it needs to be replaced again.”

“In this economy I can’t do that so I made the decision that it’s time to move and that’s what we are doing and we’re moving to the Dixie Girl,” she said.

Lane calculated that 2.7 million meals have been served at Hill Diner since it opened in 1988.

“I’ve logged thousands of miles on my feet on these floors,” she said.

Lane also figured out that she has had between 1,200 and 1,300 employees over the years.

“I’ve got kids who worked for me, whose kids are now working for me,” Lane said. “That has been the biggest struggle for me in deciding to close down the restaurant. I have 30 employees and can only take seven or eight with me over to Dixie Girl.”

Lane will be taking the popular large plates and tumbler glasses and foods such as the meat loaf and mashed potatoes, chicken fried steaks, burgers and banana creme pie to Dixie Girl.

“I can’t recreate the Hill Diner but I can recreate the food and feeling,” she said. “Also, I’m going to roll out lower prices than we’ve had at Hill Diner because it’s going to be cheaper operating under one roof and I want to pass that savings on to my customers.”

Lane will share more details of her plans as she moves forward. In the meantime, she asks the community to be a part of her decision making process as she develops her new menu at the Dixie Girl.

“I have no ego here – I just want the community to help me decide what will make a successful restaurant with happy employees and happy customers,” Lane said. “I invite our community to email me their ideas.”