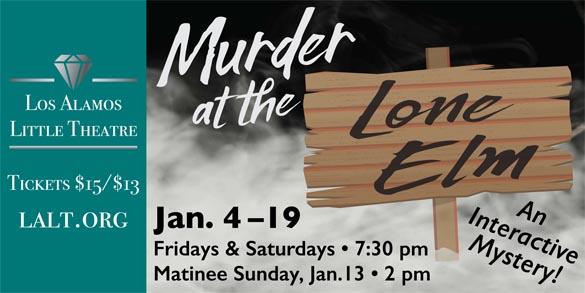 If you are wondering what to do this New Year’s Eve, why not get in touch with your inner Sherlock Holmes and come help the Los Alamos Little Theatre (LALT) figure out Whodunnit?

LALT will offer a special New Year’s Eve performance of its January show, “Murder at the Lone Elm” at 7:30 p.m., Dec. 31 at the Performing Arts Center, 1670 Nectar St. in Los Alamos.

“Murder at the Lone Elm”, written and directed by Miles Ledoux, is an interactive murder mystery — meaning the audience gets to interrogate the suspects to see if they can determine who the murderer is.

The play is set in the Lone Elm Inn, an establishment that has seen better days. One of the guests dies in a stairwell and the hotel security chief has to determine whether it was an accidental fall or intentional action that caused the death. Many of the guests come under suspicion, and the security chief turns to the audience for help in questioning them.

Compounding the uncertainties are the recent death of a scientist who had made a deadly discovery, rumors of a mysterious assassin known as the Shapeshifter, and the lurking presence of a notorious arms dealer named Ares. Will the hotel security chief be able to sort through all the pieces before the murderer strikes again? Will the audience figure it out before the next murder happens?

Author and director Ledoux has written a number of interactive murder mysteries, but says the audience interaction in Lone Elm is what drives the story forward in the interrogation scene. The actors will need to be nimble to remain true to their characters while engaging with the audience.

The Lone Elm will serve ice cream to all patrons, making this a “mystery dessert” production.

Tickets for the show are $15 general admission and $13 for seniors or students. Tickets are available at CB FOX, online at Brown Paper Tickets or at the door.

Los Alamos Little Theatre is a member-driven, non-profit 501(c)3 organization that has been presenting community theatre since 1943 for the entertainment and engagement of Northern New Mexico audiences. Information about our season is available at www.lalt.org, where you can also sign up for email notices of readings, auditions, performances and special events.