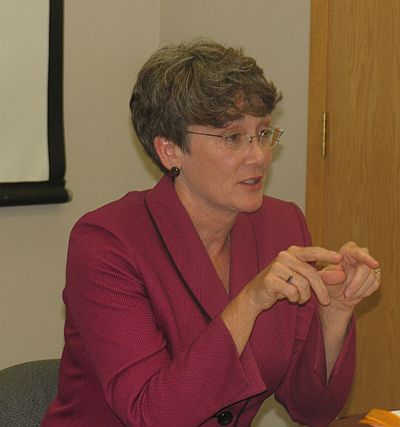 In a question and answer format, Republican candidate for U.S. Senate Heather Wilson exchanged ideas with a group of medical professionals and other members of the public on the topic of health care during a meeting at Los Alamos Medical Center Wednesday.

“I think the Health Care Act was a mistake and should be repealed,” Wilson said speaking of The Protection and Affordable Care Act, Public Law 111-148, signed by President Obama in March 2010.

Wilson said the Act would cause a number of ill effects on health care, including increases in the cost of health insurance.

Many small businesses will be forced to fire employees or place them in part-time status, Wilson said.

“This plan shifts costs to young people and requires them to buy more insurance than they need,” she said.  “I don’t think the one size fits all approach works.”

One of the things assumed in the Health Care Act is reducing payments from Medicare to doctors by 26 percent, Wilson said. adding that “Congress has so far not let this happen.”

These cuts, in addition to government mandated clinical protocols, mean that the U.S. could face a shortage of doctors, especially in rural areas, Wilson said.

“One in six hospitals will close—disproportionally in rural areas,” Wilson predicted.

Wilson said emphasis on preventative care was one way to keep medical costs down. She said that she supports the idea of medical savings accounts to help people fund their health care needs at a level comfortable to them.

Wilson looks to the market economy as the most effective means of controlling spiraling health care costs.

“Competition is what helps keep costs down,” she said.