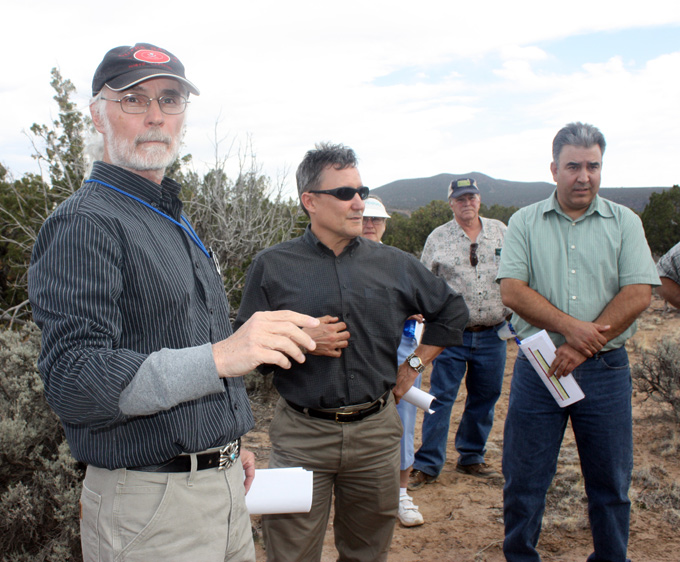 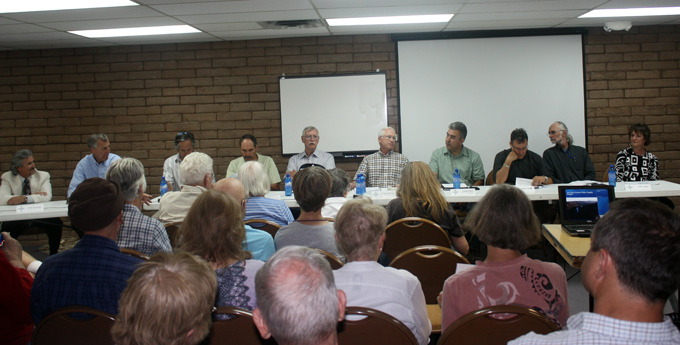 County Staff, the P&Z Board and consultants on the water project field questions from more than 50 community members. Photo by Bonnie J. Gordon

More than 50 citizens gathered at White Rock Town Hall Thursday to tour the sites of the proposed wells for the San Juan-Chama Water Supply Project. The two-hour tour was followed by four hours of heated discussion.

This year, the Department of Public Utilities contracted with CDM Smith to design alternatives to develop the County’s San Juan-Chama water rights in order to expand the water supply. The County is allotted 1,200 acre feet of water. To date, Los Alamos has not been able to access this water and therefore has never used it. The proposed project would insure Los Alamos maintains rights to the water and provide a 22 percent increase to the County water supply, DPU Project Leader Jack Richardson said

The group toured two of the proposed well sites and also visited two existing wells. The preferred site for the first well is located on the southeast side of Pajarito Acres and would be drilled to a total depth of 1,200 feet. This site has the highest potential yield The site is located near a popular hiking trail and is close enough to homes for ongoing noise to be a problem once the well is completed, though some homes will be impacted during construction and the well site will be visible from some homes as well as on the trail. The well would be near, but not on the canyon rim.

This site has the highest potential yield. Problems with the site mentioned by members of the tour group centered on loss of open space, environmental impact, and noise and disruption during the construction phase.

The second site, located at the Kimberly Lane cul-de-sac north of the Red Dot Trail is much more problematic in terms of long-term effects on home owners. The closest, the Jeffries home is in clear view of the site and CDM Principal and Civil Engineer Robert Fowlie said that it was possible the completed well could be heard from the house. Other homes are also nearby and would be severely impacted by the construction process, including a period of three to four months of 24/7 operation of the drill, with attendant lights and noise.

The tour group did not visit the third and least controversial site at Overlook Park. Unfortunately, this site has the lowest potential for yield, according to CDM’s report. All three sites would occupy about one acre. 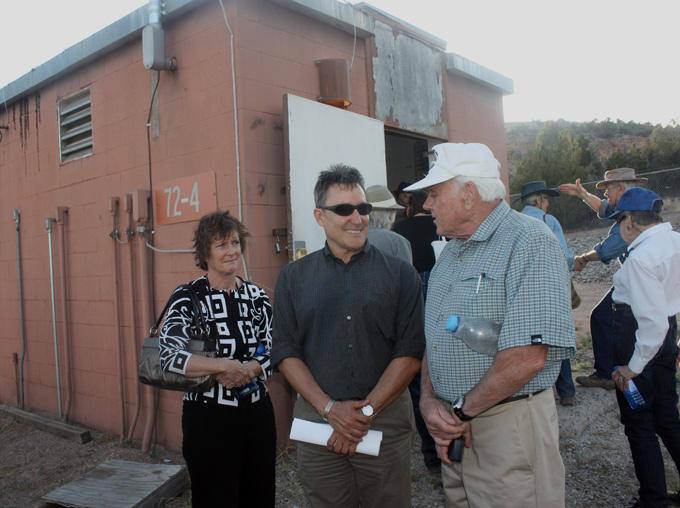 “We won’t know until the exploratory wells are drilled,” he said.

The group returned to White Rock for a four-hour discussion and presentation about the project by County Staff, members of the Planning and Zoning Board and Fowlie and Kelly Collins of CDM.

CDM considered five alternatives for accessing the water, Fowlie told the group. Two involved tricky negotiations with Santa Fe and San Ildefonso Pueblo that did not pan out. Capturing run-off did not produce sufficient water and  a tunnel option was too expensive. Option five, the drilling of one to three wells along the edge of White Rock Canyon to capture ground water flowing into the Rio Grande was selected. To offset the captured groundwater, surface water from the County’s stored share of San Juan-Chama Water would be released into the Rio Grande.

Early questions centered on the choice of the sites.

“Because the concept is to capture groundwater that makes its way to the Rio Grande, the site must be relatively close to the river,” Richardson said. “It is not on the canyon rim.”

The County had to use land they owned, he said. This brought up the fact that the County had not explored the project with Los Alamos National Laboratory and did not discuss with them the possibility of siting the wells on DOE land.

“I contacted the Public Relations folks at LANL and they had never heard of this project,” said Diane Spengler, who lives in Pajarito Acres.

Impact on neighborhoods dominated the discussion. Concerns include lights, traffic and noise during the construction phase. The noise factor seemed the most serious concern to the crowd, especially since drilling will be taking place at night for up to four months and during the day for as long as seven months.

Environment impact was also a major concern. Pajarito homeowner and former LANL scientist Milt Gillespie raised concerns that diesel exhaust would be a danger to citizens and in fact, a former LANL well project was stopped because of diesel fumes drifting into White Rock. He also said that numerous problems drilling through basalt occurred during LANL well projects that caused unforeseen expenses and delays.

Placing the wells on land currently designated as open space parkland incensed many local residents. County Ordinances state that the land in question shall stay undeveloped unless removed from the ordinances.

“We never dreamed this would happen when we purchased our property,” one homeowner said.

The County would have to petition the County Council for a variance to the ordinances in order to proceed with the project, Utilities Manager John Arrowsmith said.

Councilor Pete Sheehy was in the audience and told the group, “We will talk over the impact on the County and the impact on the property owners before we make a decision. There’s plenty of time to get the facts out there.”

Some citizens questioned the need for the water to be obtained from the wells. County studies show a sharp population climb in 2015 (more than 7,000 new residents.)

“I’ve lived here 35 years and we’ve never seen that kind of growth. The increase seems to be tied to the release of DOE land to the County for development, but the crowd was skeptical about these numbers.

“We’re not saying people will move here,” Richardson said. “We’re saying this would give them the potential to move here.”

Securing rights to the water before they are claimed by other municipalities, increasing the reliability and sustainability of the water supply, providing additional sources of water and allowing our current water supply to recover its water table were other reasons mentioned for obtaining the water.

Richardson said after the meeting that he is concerned about climate change causing increased drought conditions, but since hard data is not available on the time this might take, he did not include it in his remarks.

Clearly, this decision is nowhere close to being made. The County had hoped to move forward on seeking a variance to the open space ordinances in June and begin drilling the first test well in July. With the amount of public outcry, that looks doubtful.

Residents can expect a protracted discussion about the variances in upcoming County Council sessions. If the variances are not granted, it would seem that the project, for now, is stopped in its tracks. 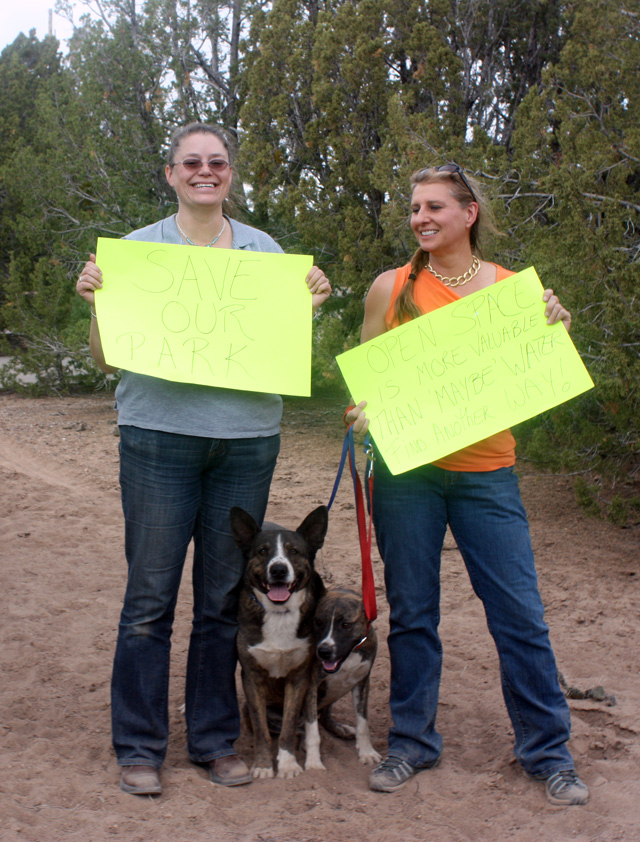 Jackie Seay and Diane Spengler hold signs protesting the placement of wells on park land. ‘This is the worst idea ever,’ Spengler said. ‘I walk my dogs here every day. There are a lot of other options.’ Bonnie J. Gordon/ladailypost.com
Menu
LOS ALAMOS