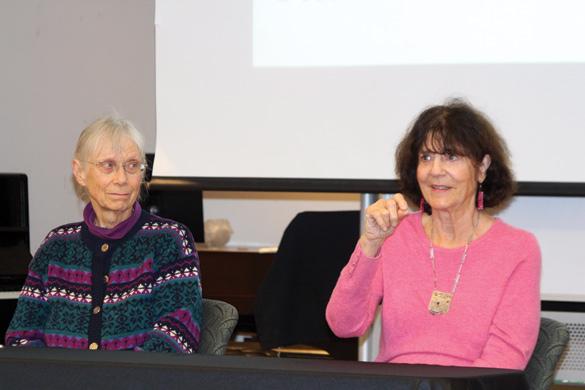 The Health Security Act has been introduced several times in the state legislature, but this session, the Campaign staff believes there’s a real shot at passage, Feldman said.

Why? Brian Egolf, the speaker of the New Mexico House has expressed public support and confidence in the Act’s passage. With a brand new Democratic governor at the helm, getting past a veto is no longer a problem.

Feldman sees strong support for the Act around the state.

[The Los Alamos County Council endorsed the Act in November, as did the City of Albuquerque.]

“We could be the first state in the nation to do this,” Feldman said. “We could be a model for the rest of the country.

Feldman outlined the plan in brief. The Act would:

The first phase will focus on financial feasibility issues, Feldman said. The bipartisan Legislative Finance Committee will be responsible for determining, with public input, the Plan’s total cost and available revenue sources. New Mexico residents will have ample opportunity to review and react to different financing options, she said.

“The Plan will not be implemented until the legislature determines that it is financially viable,” Feldman said.

In 2014, New Mexico ranked last in the U.S. in access and affordability of health care and spent the most — 17.9 percent of gross state product — compared to its neighboring states.

Why is this? Because the state is rural and poor, Feldman said. Single payer health coverage is especially effective for small populations with expensive needs because many clients live in places without health care facilities, she said.

There are direct benefits to small businesses from the Act, Feldman said.

“People who would rather work for a small business currently must go with an employer that offers insurance,” Feldman said.

The plan would help reduce the costs associated with workman’s compensation, which would reduce costs for businesses she said.

According to Feldman, the Act would attract workers, especially health care professionals to the state.

Dr. Cate focused her remarks on the benefits the plan offers to physicians.

“Physicians can finally take control of patient care,” she said.

Instead of decisions on treatment being made by insurance agency employees, treatment would be determined by the doctor and the patient, she said. She said some companies require doctors to spend only 10 minutes with a patient.

Cate pointed to the amount of time and money medical professionals must now spend on dealing with insurance companies. Cate also pointed to the effects of high deductibles on patients’ willingness to seek timely treatment, get needed tests or seek ongoing wellness advice.

Bulk purchasing of drugs though the Plan would bring down costs for a small state like New Mexico, Feldman pointed out.

“Doctors should be able to make effectiveness, not cost, their priority in prescribing drugs,” she said.