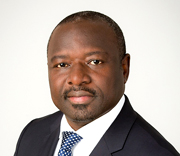 While at Los Alamos, Zerbo discussed the laboratory’s technical support of the CTBTO and its role in maintaining the U.S. stockpile without nuclear testing. This included tours of the Nonproliferation and National Security Center and the Dual-Axis Radiographic Hydrodynamic Test Facility (DARHT), a critical component of Los Alamos’ stockpile stewardship mission, that helps scientists ensure that weapons in the stockpile are safe and effective and—if ever necessary—will perform as designed.

Experts from Sandia National Laboratories also joined in the discussions.

Zerbo’s visit to NNSS in Nevada was his first to the former U.S. nuclear explosive test site that has since been transformed into an experimental testing facility and training ground supporting a variety of unique nuclear nonproliferation and advanced technology missions vital to U.S. and international safety and security.

“It is a significant opportunity to be able to host Dr. Zerbo on his first visit to NNSS and to show him how our former nuclear explosive test site has been transformed into a key resource that supports nonproliferation, arms control, emergency response, and environmental activities as well as the stewardship of the U.S. nuclear weapons stockpile,” Harrington said. “We were pleased to be able to show Dr. Zerbo this transformation and we hope he and the international community better understand the U.S. commitment to global non-proliferation.”

At the NNSS, Zerbo learned about the history of the U.S. nuclear explosive testing program and saw firsthand the results of atmospheric and underground nuclear explosions.

He also saw how the Stockpile Stewardship Program has allowed the United States to maintain its stockpile without nuclear explosive tests since 1992, and learned about current nuclear explosion monitoring and verification efforts at NNSS.

Zerbo also discussed the progress being made as NNSA prepares to host OSI trainees and CTBTO experts in May 2016 at NNSS, an activity designed to enrich the training and experience of CTBTO on-site inspector trainees by providing controlled access to a former nuclear explosive test site.

“Dr. Zerbo’s visit to NNSS allows the U.S. Nuclear Security Enterprise to reinforce the complementary nature of the relationship between our commitment to maintaining a credible U.S. nuclear deterrent, and our responsibility to honor our ongoing commitments not to produce new weapons, address new military mission requirements, or conduct nuclear explosive testing,” Davis said. “This visit represents an important opportunity to enhance transparency with the international community.”

At the conclusion of his visit to NNSS, Dr. Zerbo said, “It is a sobering thing to visit a place where so many nuclear explosions were conducted, and I appreciate this tremendous opportunity. I applaud the United States for foregoing nuclear explosive testing for over 23 years and I hope that will continue, along with the U.S. support for our efforts to make a global ban on nuclear explosions the international norm. I was greatly impressed by what I saw in Nevada, and it has given me a renewed motivation to make nuclear explosions a thing of the past for all nations.”

Prior to his NNSS visit, Zerbo visited LLNL, where he received an overview of the lab’s activities, focusing on those that most directly support the CTBT’s mission, including NNSA’s Seismic Cooperation Program, the Lab’s Regional Seismic Travel Time (RSTT) outreach efforts, on-site inspection Continuing Period Technologies (CPT) and advances in seismic monitoring technologies.

NNSA’s support for the CTBTO focuses on strengthening all aspects of the international nuclear explosion monitoring and verification regime, and encouraging all countries to work toward the Treaty’s entry into force.