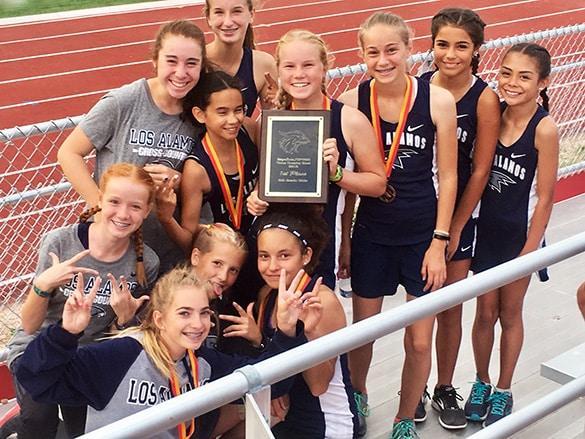 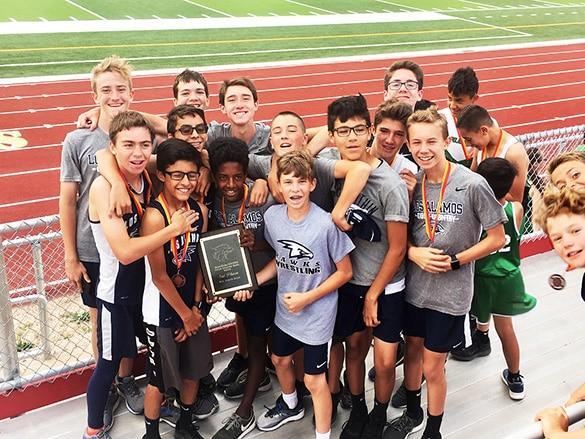 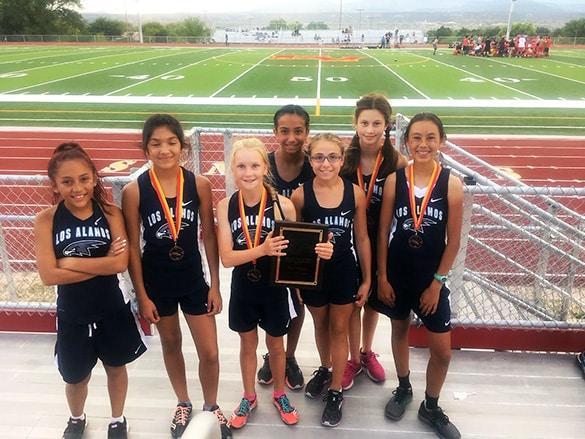 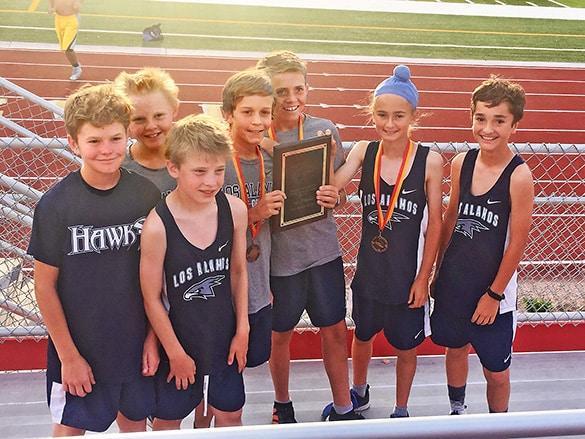 The 2018 Middle School Cross Country season got underway in mid-August and comes to an end in mid-October. Team and individual success have continued with the 2018 group of 7th and 8th graders.

The Hawks teams are unbeaten going into their final meet of the season.

The season kicked off in Taos with a win for the combined 7th/8th grade girls team, on a 1.5-mile course at Kit Carson Park. The Hawks scored 18 points to win over the home team Taos, which scored 73 points. Seventh grader Delaney Ulrich pulled away in the final 200m for the win, followed closely by Hailey McDowell in 2nd, Nazarae Romero in 3rd, Jasmine Hornberger in 4th and Giana Benelli in 8th place.

The next race for the Hawks was Sept. 19 at Espanola. This meet had separate races for each grade and the Los Alamos teams displayed their depth of talent. First up were the 7th grade girls where Ulrich claimed the win, kicking in to pull away on the final stretch. Teammate Romero placed third, and Hannah Hsu 6th, Emma Frost 9th and Lia Rushton 13th rounded out the Hawk’s top 5. The team won with 32 points over Pojoaque, 43, and El Dorado 122.

The 8th grade girls had a close team battle with Santa Fe Indian School, with the Hawks edging SFIS with 26 points to 30, for the win. Hawks top 8th grader Hailey McDowell distanced herself from the field coming off the hill section, to sprint in for the individual win. Hornberger finished 3rd, Hailey Bueck 5th, Madelyn Crotzer 8th, and Megan Crawford 9th.

At the Capital City Invitational Sept. 29, the grades merged to compete as a combined 7th/8th grade team, and once again brought home the team-champion trophy.

Ulrich took the win with McDowell close on her heels in third position. The trio of Romero, Hornberger and Bueck took 4th-6th-7th, to contribute to the winning score.

The steep hills on the 1.8-mile course at Cochiti tested the mental toughness of the competitors Oct. 3. Ulrich took her 4th win of the season, again supported by Romero in 3rd place, for the 7th grade girls. Hsu, Frost and Rushton finished in 7th, 9th and 15th place to give the team 33 points, which was good enough for the win for Los Alamos over Albuquerque Academy with 38 points, and Desert Ridge (111 points).

Next, in the 8th grade girls, McDowell finished in silver medal position and Bueck took bronze. A close 6 second spread from Hornberger, Crotzer and Anya Manzanares in 6-7-8, completed the team tally of 26 points to give the Hawks a decisive victory over Desert Academy who scored 46 points. The Hawk’s Nyla Lee also ran to a top-10 individual finish.

The season opener started off perfectly with a win for the combined 7th/8th grade boys team, Sept. 15 in Taos. In the point tally the Hawks posted a perfect score of 15 to beat the teams from Espanola (80pts) and Taos (88pts).

Four days later, the Cross Country teams raced at Espanola, this time in separate races for 7th grade and 8th grade. Haiden Jorgenson pulled away from the field early to get the first win of his scholastic career and lead the Hawks to a win in the 7th grade boys. Los Alamos scored 29 to handily beat Santa Fe Indian School, 59, and El Dorado Middle School, 80 points.

Sept. 29, the team competed in a combine grades race at the Capital City Invitational at the Santa Fe Municipal Complex. Beck Ellis stepped up to set the pace and lead the Hawks and post his first win in a middle school race on the fast 1.7-mile course. Just six seconds behind him was Jorgenson in 2nd place. Also scoring for the top 5 were, Johnson 4th, Urbatsch 5th, and Ammerman 6th, with a great pack time of 33s. That secured another win for the Los Alamos boys team.

The most recent race for the Hawks came Oct. 3 on the challenging hilly course at Cochiti Middle School. With separate races again, the Hawks boys came home with  wins in both the 7th and 8th grade boys races.

For the 8th grade boys, Ellis and Aiden Richardson placed 4th and 5th respectively, to contribute to yet another perfect score for the boys. Khalsa, Boone and Swaverly were the next for the Hawks 7th grade top 5, placing 6th, 7th and 9th respectively. For 7th grade Aiden Logan, and for 8th grade Nathan Fresquez, Julian Baros and Abraham Sanchez, also ran to placings in the top 10 of their races.