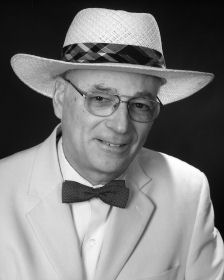 Dr. Noel H. Pugach, Professor Emeritus of History at the University of New Mexico, will perform a Chautauqua impersonation of Truman.

Compared to the “Great Roosevelt,” whom he succeeded as 33rd president of the United States, Harry S. Truman’s beginnings were undistinguished. Yet, by virtue of his direct style, earthy personality, and willingness to make tough decisions, ranging from the use of the atomic bomb to the confrontation with the Soviet Union, and the Korean War, Truman left an indelible mark on the United States and the world.

As the Chautauqua performance begins, Truman introduces himself to his audience. He provides brief biographical information about his early life. He then proceeds to relate how he became the thirty-third president of the United States, his response to that event, and the public reaction.

Truman then focuses on his presidency, particularly the area of foreign affairs. Among the topics discussed are: the ending of World War II, the decision to drop the Atomic Bomb on Japan and the problem of the nuclear arms, the dawning of the Cold War and conflict with the Soviet Union (the Truman Doctrine, Marshall Plan, the Berlin Blockade, and NATO), the recognition of the State of Israel, the Korean War and the firing of General Douglas MacArthur. Truman also talks about his initiatives in the area of Civil Rights.

Truman frames his conversation around the theme of presidential leadership. After all, he was the blunt man who was not afraid to make the “tough decisions,” for the “Buck stopped at the President’s desk.” Truman offers insight into his own personality. A visit with Harry Truman offers an opportunity to understand and debate his major domestic and foreign policy decision and their legacy.

Pugach received his M. A. and Ph.D. in American History from the University of Wisconsin-Madison. He has specialized in United States foreign relations, with an emphasis on U.S.-China relations in the 20th century. Dr. Pugach has published two monographs in that field. He is also the author of over a dozen scholarly articles and more than sixty book reviews. He has presented papers at numerous conferences. He was invited to give a presentation on the Second Chinese Consortium at the Peking Forum, October 2006 (Beijing, China). Pugach also teaches courses and publishes in the field of Jewish History and the Holocaust. He has written eight studies of New Mexico Jewish families.

In addition to his many public lectures, Pugach has done Chautauqua first-person presentations for over thirty years. He currently performs as Harry Truman, John Steinbeck, and Lew Wallace. Pugach offers a special Chautauqua program that focuses on Truman and the Atomic Bomb. He was invited to appear as President Harry S. Truman at the Millennium on the Mall in January 2000 in Washington, D.C. and at Hofstra University before the last presidential debates in 2008.