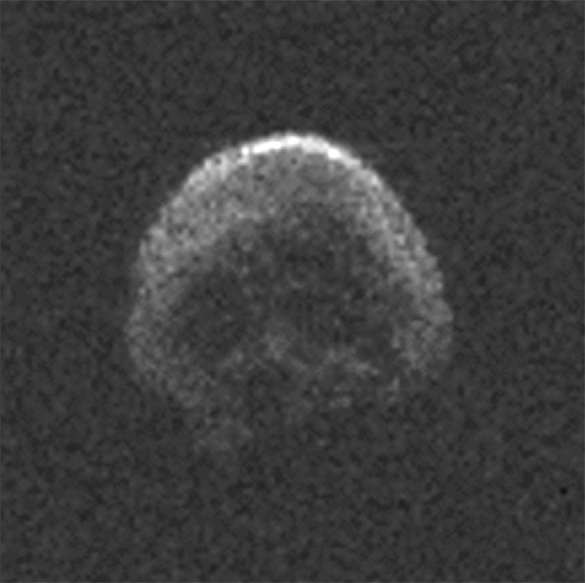 This image, bearing an eerie resemblance to a skull, of asteroid 2015 TB145, a dead comet, was generated using radar data collected by the National Science Foundation’s 1,000-foot (305-meter) Arecibo Observatory in Puerto Rico. The radar image was taken Oct. 30, 2015, and the image resolution is 25 feet (7.5 meters) per pixel. Courtesy/NAIC-Arecibo/NSF

The large space rock that will zip past Earth this Halloween is most likely a dead comet that, fittingly, bears an eerie resemblance to a skull.

Scientists observing asteroid 2015 TB145 with NASA’s Infrared Telescope Facility (IRTF) on Mauna Kea, Hawaii, have determined that the celestial object is more than likely a dead comet that has shed its volatiles after numerous passes around the sun.

The first radar images of the dead comet were generated by the National Science Foundation’s 305-meter (1,000-foot) Arecibo Observatory in Puerto Rico. The radar images from Arecibo indicate the object is spherical in shape and approximately 2,000 feet (600 meters) in diameter and completes a rotation about once every five hours.

“The IRTF data may indicate that the object might be a dead comet, but in the Arecibo images it appears to have donned a skull costume for its Halloween flyby,” said Kelly Fast, IRTF program scientist at NASA Headquarters and acting program manager for NASA’s NEO Observations Program.

Managed by the University of Hawaii for NASA, the IRTF’s 3-meter (10 foot) telescope collected infrared data on the object. The data may finally put to rest the debate over whether 2015 TB145, with its unusual orbit, is an asteroid or is of cometary origin.

“We found that the object reflects about six percent of the light it receives from the sun,” said Vishnu Reddy, a research scientist at the Planetary Science Institute, Tucson, Arizona. “That is similar to fresh asphalt, and while here on Earth we think that is pretty dark, it is brighter than a typical comet which reflects only 3 to 5 percent of the light. That suggests it could be cometary in origin — but as there is no coma evident, the conclusion is it is a dead comet.”

Radar images generated by the Arecibo team are available at here.

Asteroid 2015 TB145 was discovered on Oct. 10, 2015, by the University of Hawaii’s Pan-STARRS-1 (Panoramic Survey Telescope and Rapid Response System) on Haleakala, Maui, part of the NASA-funded Near-Earth Object Observations (NEOO) Program. The next time the asteroid will be in Earth’s neighborhood will be in September 2018, when it will make a distant pass at about 24 million miles (38 million kilometers), or about a quarter the distance between Earth and the sun.

NASA places a high priority on tracking asteroids and protecting our home planet from them. In fact, the U.S. has the most robust and productive survey and detection program for discovering near-Earth objects (NEOs). To date, U.S.-funded assets have discovered over 98 percent of the known NEOs.

In addition to the resources NASA puts into understanding asteroids, it also partners with other U.S. government agencies, university-based astronomers, and space science institutes across the country, often with grants, interagency transfers and other contracts from NASA, and also with international space agencies and institutions that are working to track and better understand these objects. In addition, NASA values the work of numerous highly skilled amateur astronomers, whose accurate observational data helps improve asteroid orbits after they are found.

More information about asteroids and near-Earth objects is at these websites: http://neo.jpl.nasa.gov and http://www.jpl.nasa.gov/asteroidwatch.