Who is Poor, who is Middle Class, and who are the Elites?To start with, the definition of “Poor”, “Middle Class”, and “Elites” varies from author to author and study to study.  For example, the Cato study (referenced below) sets an upper limit of the bottom quintile at $25,000 per year with no reference to family size.  A Brookings study (referenced below) sets the upper limit at $36,000 for a family of three, while the Urban Institute sets it at $30,000 for a family of three. Other studies use “median” and “average” incomes. Some studies break “middle class” into two groups (“working poor” or “lower middle”, and “middle”), others simply refer to the “middle 60 percent” of the income groups.
This article focuses on trends rather than absolute values.

Poor
These households are the “bottom” of earned income. Some studies show their number to be decreasing, others increasing: probably due to different definitions of “poverty” income levels. Most people in this group qualify for some form of government benefits—a “safety net”. Economic risks for the poor vary, but significant ones include “benefit cliffs”, “benefit down ramps”, housing uncertainty, and, for the great majority that have no savings, a sudden loss such as a car repair. The “safety net” is complex: one author identified 83 Federal benefit programs, and the U.S. government stipulates poverty thresholds of means-tested money income for each of 48 different types and sizes of families. (Warning. Editorial comment: of course, the several hundred types of benefits/family qualifications are complex: it’s for the poor–the elites would never stand for it).

Some programs, e.g., Medicaid, are joint federal/state programs. Most benefits are reduced or cut off at varying income levels. Some, e.g., Social Security, are not income based and do not have income cutoffs.  In addition, many states have programs independent of federal programs with different means-tested requirements. Examples of programs with means-tested benefits include the following:

Benefits are reduced or cut off at certain income levels in nearly all programs. For example, Medicaid has benefit “cliffs” based on income, family composition, and, sometimes, wealth. Food stamps, Section 8 vouchers, LIHEAP, and others ramp down benefits are based on household income. In practice, this means most poor households face a difficult choice: earn more in the formal employment sector and lose effective income or stay at a low income and continue to receive benefits. This is particularly a problem for very valuable benefits such as Medicaid and Section 8 housing assistance (which has long waiting periods, and, once in, high incentives to stay in the program).

For many poor households, it is advantageous to stay “poor” in terms of earned income. Depending on their benefit qualifications, their “spendable” income could be similar to that of the middle class. Also, their benefits may be much more reliable than middle class jobs. See the following Table and graph (from https://www.cato.org/research/poverty-social-welfare). 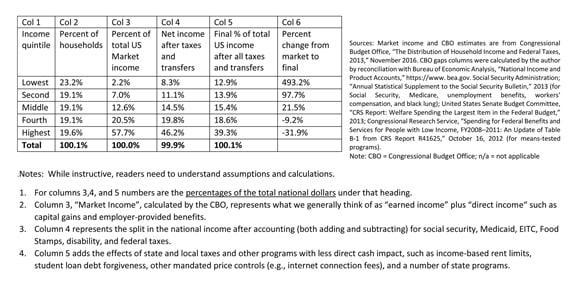 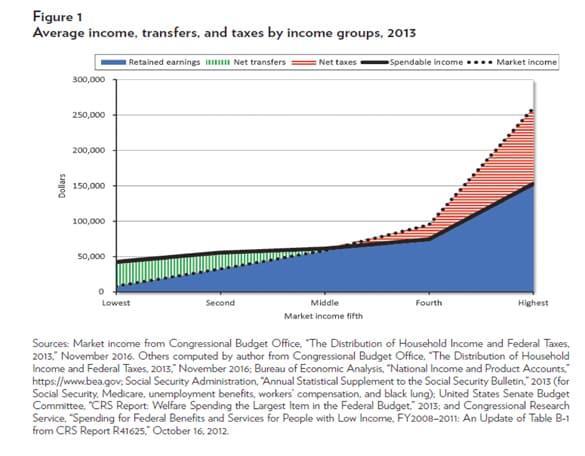 I have concerns about some numbers used in estimating the increase in poor household income between columns 4 and 5: those interested should read the study very carefully  (https://www.cato.org/publications/policy-analysis/reassessing-facts-about-inequality-poverty-redistribution). However, a key conclusion is correct: there is a large income transfer ($1T? annually) from upper classes to poor households through federal and state benefit programs.

There are several important caveats in interpreting this data. The data say a lot about policy and little about individual households: this “income” is not evenly taken or distributed: individual households may give/receive dramatically more or less of their incomes. For higher income households, the amount taxed depends on several factors such as the type of income (and, perhaps, the quality of their accountant).  For poor households, this income is determined by books of regulations and thousands of bureaucrats: it’s not like having cash.  For example, a household with a healthy lifestyle may not use Medicaid benefits, while an old person in a nursing home may receive $150K+ yearly in benefits: those without babies will not qualify for WIC.

There are definitely poor who are unable to work. However, the level and diversity of benefits often encourage people who can and do work to stay under income cutoffs. For a “poor” family to earn enough to have comparable spending to middle class households often requires doubling their earned income, often by working two or three jobs. I know several families in Los Alamos keeping their declared income under the “poverty” level (some have substantial net worth, BTW) by working only a certain number of hours, earning money on the “side”, etc.

The Middle Class:
The middle class is in relative economic and cultural decline. Both matter. The following graph, just one of many examples, shows the increasing separation of household income gains between elites and others. 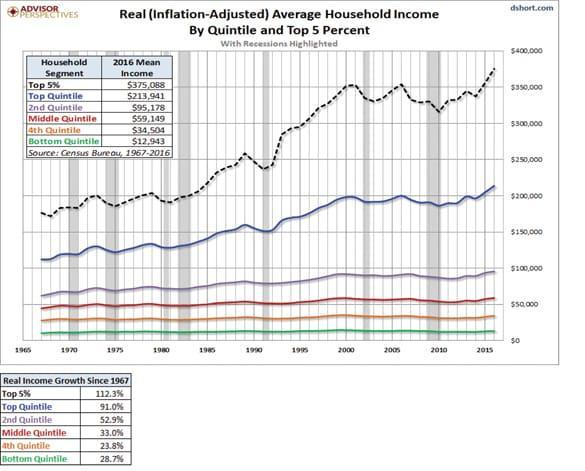 (https://www.financialsense.com/jill-mislinski/us-household-incomes-50-year-perspective). As mentioned above, there are several different studies that differ somewhat, e.g., see https://www.urban.org/sites/default/files/publication/81581/2000819-The-Growing-Size-and-Incomes-of-the-Upper-Middle-Class.pdf.  However, all show these trends.  The actual trend is worse than shown in such graphs. Nearly all studies report only household wage or salary income, and, while adjusted for inflation, do NOT reflect the higher Social Security matches paid by employers for high earners, nor greater benefits accruing to high earners (health care, vacation, etc.), nor capital gains, nor tax breaks such as mortgage deductions.

Also, studies do not adjust for geographic differences: an income of $100K in rural Oklahoma enables a dramatically different lifestyle than $100K in San Francisco.  Finally, I could not find any study that adjusted for the number of working people in a household and none adjusted for the number of jobs each person holds.  In 1970, most “middle class” households were supported by one worker working one job. Now, they usually have two workers, with one or more working two jobs.

And, from a middle-class perspective, the number of the people in top income brackets grew, adding insult to injury.  Pew research only used three brackets, and the percentage of New Mexico’s poor is probably much higher and number of elites lower. 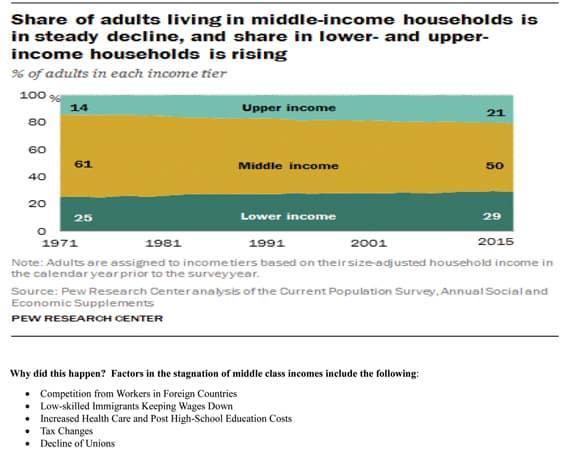 Why did this happen? Factors in the stagnation of middle class incomes include the following:

Virtually everyone agrees on “Competition from Workers in Foreign Countries”. Nearly everyone disagrees on the relative importance of other factors. With economic stagnation has come a social and cultural decline.  If one looks at upper income groups (“Elites”) and middle classes, one finds they increasingly have diverging values and experiences.  The middle classes now display greater social pathologies compared to upper income groups. Middle class people now:

See Charles Murray’s book Coming Apart: The State of White America, 1960-2010, and the Brookings institution reports, http://www.brookings.edu/blogs/social-mobility-memos/posts/2015/09/03-separation-upper-middle-class-reeves, and https://www.brookings.edu/articles/trickle-down-norms/ Studies are finding similar cultural differences around the world — “Trump, Brexit, and the Rise of Populism: Economic Have-Nots and Cultural Backlash”, Inglehart and Pippa, Harvard Kennedy School Faculty Working Papers. August, 2016.  While they identify both economic and cultural issues, they find cultural issues are more important than economic issues. Finally, Joe Biden’s quote what middle-class life should look like follows. I knew many people who fit this description when I was growing up (including my parents and my wife’s parents): I meet a lot less of these people now.

I’ll tell you what the middle class is to me. It looks like America. All of America. It is a set of values. A code of conduct. A belief in the possible. It embodies hard work, dignity, grit, pride, principle, and hope. It’s not a number. It’s not a graph. It’s not a chart. Simply put, it’s being able to own your home. It’s not lying in bed awake at night wondering what will happen to the family if you get sick. It’s raising your children in a safe neighborhood. It’s sending them to a good school, where if they do well, they can continue their education at a university or vocational school. It’s being able to take care of your parents if they need help. And it’s being able to put aside enough money so that your children won’t have to take care of you.

An interesting economic phenomenon is occurring in the middle class, especially the lower part of the middle class.  “The share of means-tested transfers going to the middle class – here, defined as the middle 60 percent of the income distribution– has more than doubled since 1979.”  (https://www.brookings.edu/research/the-rise-of-the-middle-class-safety-net/reference).  Strategies for supporting the poor are moving up the income ladder.

Elites: For All Elites in the Room: “Pogo: We Have Met the Enemy and He Is Us [Walt Kelly]”.
This includes most of those reading this.

Income separation is dwarfed by wealth separation.  As national wealth has increased, gains have gone to elites, especially the top 1 percent. The share of total US income earned by the top 1 percent of families was less than 10 percent in the late 1970s but now exceeds 20 percent as of the end of 2012.  94 percent of increased wealth (and probably income as well) after 2008 went to top 1 percent. (The Only Game in Town: Central Banks, Instability, and Avoiding the Next Collapse, Mohamed El-Erian). 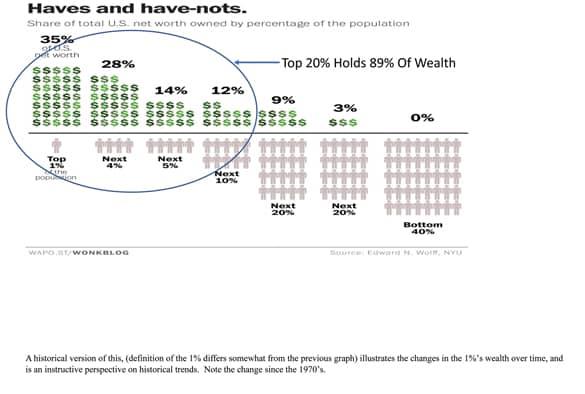 A historical version of this, (definition of the 1 percent differs somewhat from the previous graph) illustrates the changes in the 1 percent’s wealth over time, and is an instructive perspective on historical trends.  Note the change since the 1970’s. 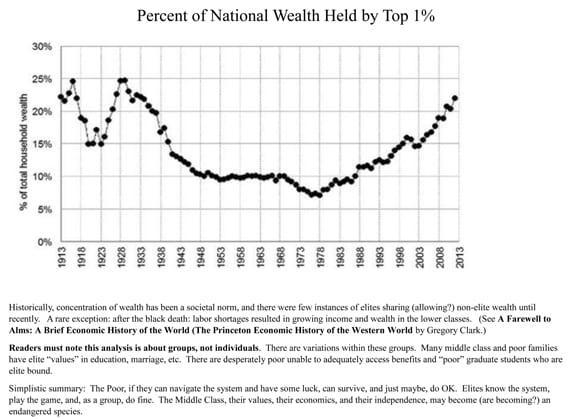 Historically, concentration of wealth has been a societal norm, and there were few instances of elites sharing (allowing?) non-elite wealth until recently. A rare exception: after the black death: labor shortages resulted in growing income and wealth in the lower classes. (See A Farewell to Alms: A Brief Economic History of the World (The Princeton Economic History of the Western World by Gregory Clark.)

Readers must note this analysis is about groups, not individuals.  There are variations within these groups. Many middle class and poor families have elite “values” in education, marriage, etc.  There are desperately poor unable to adequately access benefits and “poor” graduate students who are elite bound. Simplistic summary:  The Poor, if they can navigate the system and have some luck, can survive, and just maybe, do OK.  Elites know the system, play the game, and, as a group, do fine.  The Middle Class, their values, their economics, and their independence, may become (are becoming?) an endangered species. Send comments or questions to jhall@newmexico.com. 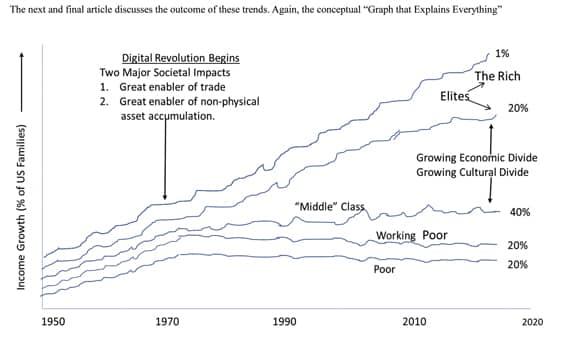