Gwynn Cunningham is Rotary Student of the Month 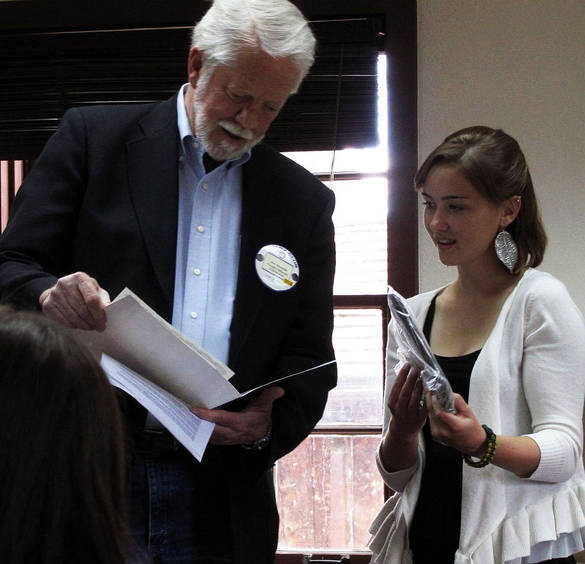 Rotarian James Nesmith with Los Alamos High School senior Gwynn Cunningham as she is recognized as “Student of the Month” by the Rotary Club of Los Alamos Tuesday at Fuller Lodge. Photo by Carol A. Clark/ladailypost.com

Rotarian James Nesmith, left, with the Rotary’s “Student of the Month” Gwynn Cunningham, her parents Andrea and Greg Cunningham and mentor Diane Toups whom she credited greatly for her success development. Photo by Carol A. Clark/ladailypost.com

The Los Alamos Rotary Club honored Gwynneth Cunningham as April’s Student of the Month at Fuller Lodge April 24. Gwynn is the daughter of Andrea and Greg Cunningham and all three are employees of Los Alamos National Laboratory. Gwynn works as a co-op student with Mentor Scott Watson on groundbreaking technology in X-Ray imaging.

Gwynn is involved in Natural Helpers, National Honor Society, Varsity Tennis, Youth Advisory Board and United Way Youth Team. The Club she is most passionate about is Natural Helpers – a peer counseling group. Gwynn was nominated to join Natural Helpers by her peers as a freshman. She has served as co-president for two years. Her roles include training and mentoring new members, providing peer counseling and supporting students in need.

As a member of the United Way Youth Team, Gwynn has participated in a number of community fundraising events during the last four years. She also has a leadership role in the National Honor Society serving as its treasurer.

Gwynn honored Natural Helpers Sponsor Diane Toups during last Tuesday’s Rotary Club meeting as the adult who has had the greatest impact on her development. She described Toups as having, “the biggest heart of anyone I’ve ever met.” She said Toups’ caring and compassion for students in need is inspirational.

Gwynn plans to attend the University of Michigan to study electrical engineering.

The Rotary Club of Los Alamos selects a senior from Los Alamos High School each month throughout the school year to honor. Rotary’s Student of the Month Committee selects students based on academic excellence, extracurricular involvement and service to the community.