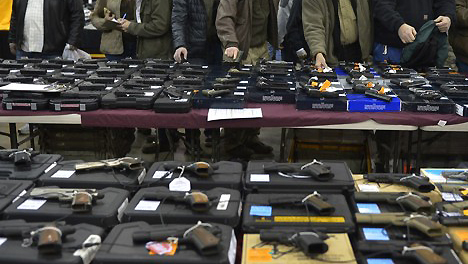 HB 77 sponsored by Rep. Miguel Garcia, D-Bernalillo was headed to the House Appropriation and Finance Committee (HAFC), but Monday Chairman Henry “Kiki” Saavedra, D-Bernalillo asked to have the bill withdrawn from HAFC saying it didn’t have a fiscal impact.

House Bill 77 will now be placed on the Temporary Calendar, and is scheduled to be debated on the floor Wednesday, Feb. 13. Rep.

Garcia says HB 77, which closes Gun Show loopholes has been refined, taking out the private sales provision and adding a mental health component.

The committee substitute for HB 77 makes the following changes:

“The changes to HB77 of limiting the background checks to Gun Shows only and codifying the reporting process to the FBI on the mentally and criminally adjudicated makes our bill acceptable to most members of the House of Representatives,” says Rep. Garcia. “It is enlightening to see legislators of both parties rally around the amended bill. All New Mexicans should be proud of the compromising efforts that contribute to making our neighborhoods and work sites safer.”

You can read more on House Bill 77 by clicking here

HB 10 makes it unlawful for a felon to receive, transport, or possess a firearm or destructive device in New Mexico. Violation of this law will result in a fourth-degree felony in accordance of the Criminal Sentencing Act.

The definitions of a destructive device include:

Speaker Martinez said “Safety of all New Mexicans is a top priority for both parties in the Roundhouse. I am excited to work with Rep. Bill Rehm on this legislation. Keeping guns out of the hands of felons is something we all agree on.”

“Unfortunately our state statutes have been in conflict with Federal Law, confusing New Mexicans,” said Rehm regarding HB 10. “I embrace Speaker Martinez’s support to end this confusion by aligning New Mexico law with Federal Law on who may possess a firearm.”

Federal law already excludes felons from possession of firearms; however loopholes at the state level still allow many felons to believe they can legally possess firearms. Speaker Martinez and Representative Rehm hope this common sense gun legislation will receive bipartisan support in the House and Senate as well as support from the Governor.

House Bill 10 has been assigned to the House Judiciary Committee for further review.