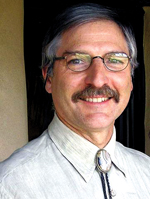 Elena Giorgi  states the oft-repeated claim that “states that have closed the loopholes have seen a huge reduction in gun homicide.” I wish Ms. Giorgi and others would cite their sources for these claims because as far as I know, there is no evidence of such a huge cause and effect between closing private sales “gun show loopholes” and seeing resulting “huge” reductions in gun crime. Indeed, states with so-called “weak” gun laws range from those with very high gun homicide statistics to some having the lowest gun homicide rates.

Indeed, one can look closer to home. The New Mexico State Constitution pre-empts local government from passing gun laws, so every county has the same laws. Do we all have the same gun violence rates? I don’t think anyone would mistake peaceful Los Alamos for some of the gunshot-ravaged parts of Albuquerque. The same vasts differences in gun violence rates exist in different districts of Chicago, as seen in the figure below. Suggesting to readers that should we pass this bill, there will be a spectacular reduction in gun crime in New Mexico is misleading and avoids the question of why gun violence is so localized even when laws are not. 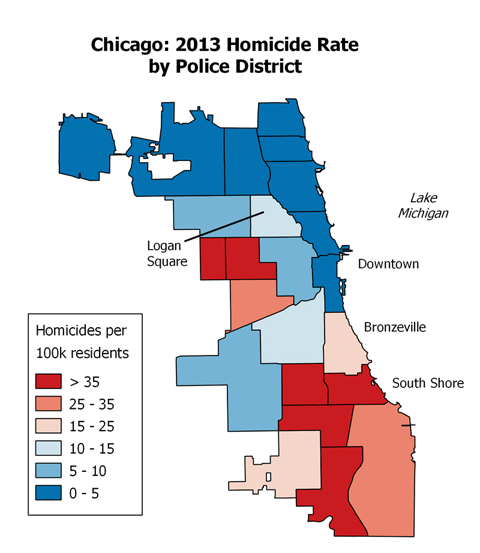 There are too many variables in play between states to ascribe vast differences in gun violence rates to a few gun laws. The variation not only of state gun laws (permits to purchase, firearms owner identification cards, permits to carry, restrictions on types of guns, etc) but the range of other laws, enforcement mechanisms, prohibited person reporting effectiveness, customs, poverty rates, drug addiction rates, and cultural norms that influence violence rates add a host of interrelated variables to the complex question of “how do gun laws influence crime?”

Indeed, a recent so-called study put out by the Center for American Progress (CAP), a political advocacy organization, that purported to show that strong gun laws correlate with reduced gun violence was almost entirely explained by the relationship between gun controls, gun ownership rates, and gun suicide rates. There was a correlation, albeit a weak one, between “strong gun laws” and reduced domestic homicides and some other types of homicides but overall, gun homicide rates did not correlate with the CAP’s highly subjective evaluation of state gun laws. And as any statistician can attest, correlation is not perforce causation.

But lets not throw the baby out with the bathwater. The value of a comprehensive background check law, should it be passed, is that it would likely make it more difficult for a prohibited person to acquire a gun via the private market, although not all NICS denials are due to truly scary people being denied a gun**. But catching bad guys is a good thing, because it cuts off one conduit for bad guys getting guns. But New Mexico has some of the highest vehicle and residential burglary rates in the US and many firearms on the illicit market are likely stolen (based on a conversation I had with Albuquerque Police Chief Gordon Eden), and recycled through the black market. Clamping down on the ease of stealing firearms is an important task in reducing gun violence. Perhaps the Legislature should give tax rebates to those who buy robust gun safes. So is reaching out to at risk groups and convincing them that gunshots are not an acceptable form of conflict resolution. New Mexicans To Prevent Gun Violence works tirelessly at this last task but seems to be brushed aside in favor of listening to high profile advocacy groups.

** from a Washington Post blog article: “… “The (ATF) special agents we spoke with generally commented that they do not consider the vast majority of NICS referral subjects a danger to the public because the prohibiting factors are often minor or based on incidents that occurred many years in the past,” the report added. The report cited, as examples of people prohibited from buying gun, someone who had stolen four hubcaps and a person convicted in 1941 of stealing a pig. Of the cases reviewed by the IG, 48 percent of the crimes had occurred more than five years earlier — and 13 percent at least 20 years previously.”

As I have said before in the Daily Post, the original House Bill 50 and its companion Senate bill would likely (and certainly did) create a firestorm of resistance among law abiding gun owners because the provisions in the bill put onerous constraints on temporary transfers and casual sales between law abiding people who know and can vet each other without government oversight. If we expect any sort of bipartisan support for this bill, and for the Governor to sign it, some “common sense” exemptions to the background check provisions will be needed. I testified in support of a scaled-back bill but the current one has several issues that make it problematic, such as the five day limit on temporary transfers. Imagine being stuck in a snowstorm while on travel and coming back to potential misdemeanor charges because your three day “temporary transfer” turned into a week!  Likewise, the needless hassles this bill would put on law abiding rural New Mexicans who might only want to sell a gun to a neighboring rancher they have known, and trusted, for their whole life but who have to drive 50 miles to find a licensed dealer makes sense only if you assume all gun owners are potential prohibited persons.

So let’s have the discussion of this bill, and let’s support, wholeheartedly, the notion that we should have an effective mechanism to vet a stranger before handing over a firearm. I think a highly modified version of the pre-filed bills could become law and could make incremental but measurable reductions in gun violence while not making life miserable for law abiding citizens. That’s the discussion we should be having.

The bigger picture of gun violence in New Mexico will depend on a lot more variables being addressed than requiring background checks for private gun sales. There is no silver bullet here, just a lot of copper and lead ones that we need to aim carefully if we are to hit the target of gun violence reduction.