Griggs: Ringside Table On Life In The Marrakech Medina 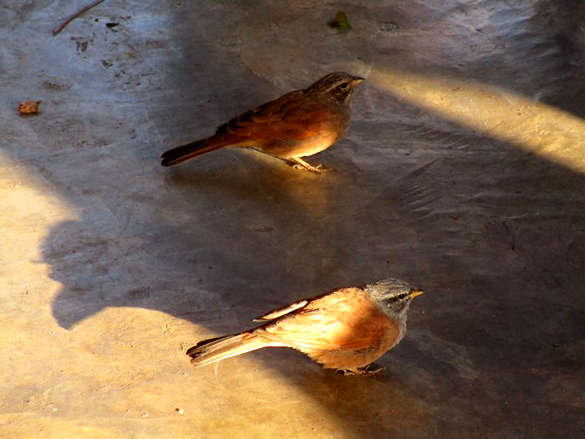 House buntings cheerfully clean up the floor in a restaurant on top of a fondouk where in days gone by visiting merchants would unload their camels and store their goods to sell in the souks. Courtesy photo 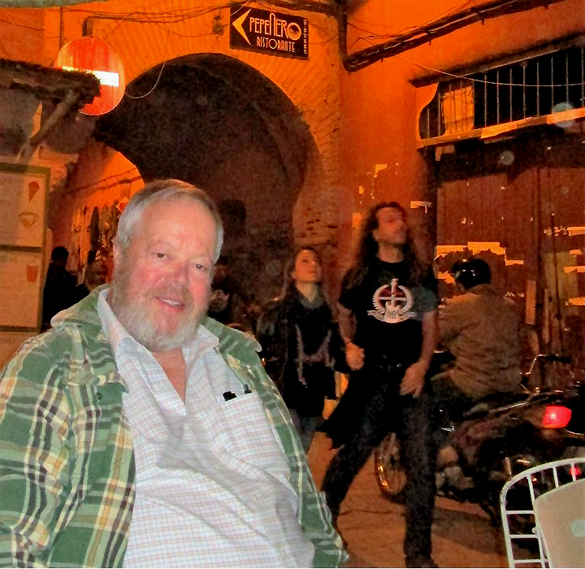 Recently I had the pleasure of spending two months in Morocco, on the northwest coast of Africa.

The ancient imperial city of Marrakech was my transportation hub, with good connections for bus, plane, and train to other parts of the country. My base of operations was the vibrant and friendly Hostel Riad Marrakech Rouge, located deep in the heart of the medina, the ancient walled part of the city.

I should insert here a few words about hostels, which provide a lower cost option for place to stay than normal hotels.

There are several on-line hostel booking agencies that provide lists of hostels in any given city in the world, as well as prices, descriptions, photos, and customer reviews. I normally use Hostelworld http://www.hostelworld.com

Accommodations at hostels are generally bunkbeds in dormitories, sleeping anywhere from four to twenty people per room, with shared bathroom facilities. Dorms are single sex or coed, depending on the hostel.

Usually some sort of breakfast is provided, as well as bedding and towels. The layout and atmosphere are conducive to meeting your fellow travelers from all over the world, most of whom are several decades younger than I am. As far a cost goes, I paid between $8 and $12 per night at hostels in Morocco.

Over the centuries, as the area inside the safety of the walled medina filled up, merchants of specific types of goods tended to set up near each other in what are called souks.

My two favorite souks are Olive Souk, behind the Kharbouch Mosque, with beautiful piles of olives.

For 10 dirhams (just over a dollar), the vendor will fill a plastic pint container with your choice of his bounty. There are usually at least ten different varieties from wrinkled black olives, to green, to spiced, and my top pick, a plump pinkish-red.

My other favorite is Souk el Mellah, which specializes in spices. As a cook (as well as a consumer), I gloried in the colorful palettes of cone-shaped spices including cumin, pepper, paprika, ginger, turmeric. Also for sale were anise, coriander, cardamom, ginseng, argan oil, jars of saffron, and ras el hanout (“a mixture of 35 spices ideal for allkinds of meats and vegetables”).

A small passageway leads you to Le Criée Berbère (the Berber Auction) where slave auctions used to be held until the French occupied the city in 1912. Today the busy area is filled with vendors selling a rainbow of rugs and carpets, and the merchants will be glad to unroll them all for you.

One day I went to the Terrasse le Madersa for a light lunch of chicken panni and café au lait, with dishes of carrots and squash for snacking. The restaurant is on top of an old fondouk (caravanserai) where visiting merchants unloaded their camels and stored the goods they would sell in the souks. The merchants stayed in the upper floors. The building has a thick outer wall and a very heavy wooden door.

When I was in Marrakech, I usually ate a late dinner at a little street-corner café, La Porte du Monde, located deep in the ancient medina. After a long day on my feet exploring the souks and museums and other attractions, I enjoyed relaxing at this friendly resting place, which is then only a short walk from my hostel. The waiter Yassine Laàtifi took very good care of me.

The cafe features the locally popular tajines. Cooked and served in a unique ceramic dish with a conical lid, tajines feature vegetables simmered with a complex blend of spices plus the options of such items as chicken, beef, lamb, or fish. Dinner is always accompanied by a bowl of olives and one of the delicious round loaves of bread that are common throughout Morocco. The extensive menu also includes salads, brochettes, pastillas, sandwiches, pizzas, and a delicious range of desserts.

The café is located on a tiny square where a side lane runs into Rue Riad Zitoun Djdid, which is not much wider than my outstretched arms. I think it is the movement and swirl of the activity that attract me. Upstairs, the café has an enclosed dining room. However, while the food is the same, the entertainment is missing. Sitting downstairs, I have a ringside seat on life in the medina as it passes by my table.

The motorbikes carry one person, a wife or girlfriend riding pillion, even whole families, as well as boxes, groceries, clean laundry, musical instruments, mirrors, and various other merchandise. Drivers maneuver with one hand while texting, talking on cell phones, holding babies, boxes, mirrors, bags of produce, guitars, a stack of plastic tubs, drums, and baskets of bread. If worn, the helmets all look like Wehrmacht leftovers from World War II.

For my motorcycle friends at home, I believe that most of the motorbikes are powered by single cylinder 50cc engines, a far cry from your powerful Harley Davidson and BMW road machines.

A friend from Florida wrote me recently: “I’m looking forward to your report. I spent four months in Morroco in 1970. Drove down there from Germany on a brand new BMW R75/5 motorcycle.”  (For comparison, that BMW had a 750cc engine.)

For the birdwatchers in the audience, I should mention White Storks, who nest on top of the ruined splendor of El Badi Palace, as well as the tops of mosques and other high locations. They can be seen flying over the city, and remind me of Sandhill Cranes in flight. Despite the stories about them, I did not see any storks carrying babies.

A few blocks from my hostel is in the vast open square named Jemma El Fna, which for centuries has been an entertainment magnet for locals and tourists.

As the evening deepens and the air cools off, the vast open square fills with people. Rows of food stands are set up, each complete with its own seating. A row of carts sells dishes of cooked snails. Other rows of carts sell freshly squeezed glasses of orange and other juices. There are storytellers, fortune tellers, magicians, acrobats, Barbary apes with diapers, women painting henna tattoos on tourists, carts selling dozens of varieties of dates and nuts, shoeshine men, peddlers of traditional medicine, and people set up on blankets selling all sorts of items.

I enjoy walking past the carts that sell spices and incense, as the fragrant smoking samples perfume the evening air with exotic aromas. The soundtrack includes the music of Berber men drumming and singing, as well as the plaintive flutes of the snake charmers with their cobras.

Around the perimeter of the square are cafes and restaurants and dozens of small stands selling all manner of Moroccan souvenirs. As I walk past, the proprietors call out to entice me into their shops, “Hey, Ali Baba!” To which I respond, “Iftah ya simsim!” (“Open Sesame!” in Arabic). We all laugh.