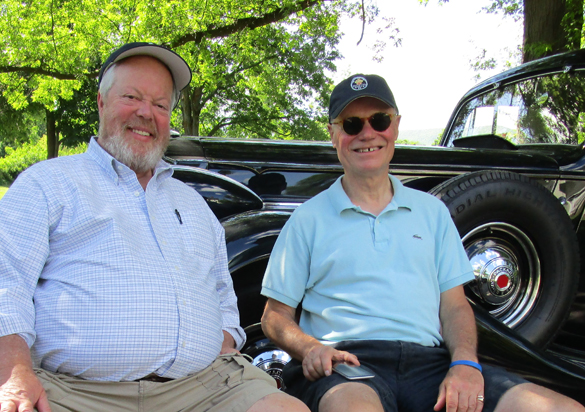 Author David Griggs and Gunther Hoyt sit in front of Gun’s 1937 Packard Super Eight. They are about to set off on a beautiful May afternoon drive from Salem to Roanoke on the scenic Blue Ridge Parkway. Cpourtesy photo

The Crescent From New Orleans To Virginia, With A Side Trip To The World Of Ibn Battuta

One of the joys of retirement is the opportunity to visit family and old friends (and make new ones). I saw Gunther in Kent at our high school reunion a few years ago (our 45th, for those of you who like numbers). But I had not seen his lovely wife Hetty since my last trip through Virginia after my job as cook in Texas on the movie Dead Man’s Walk in 1995. I enjoyed getting to know their son Harry, who is not a little kid any more but now a handsome young man.

Gunther and Hetty recently sold their house in Salem, moved into the city of Roanoke, Va. They live in the elegant top floors of an office building in the historic downtown. The area has been revitalized in recent years, and they are in walking distance to restaurants, theatres, stores, museums and churches.

While walking through the nearby Farmers’ Market, Gunther introduced me to a friend of his who was escorting three visiting young people. To my delight, the three were visiting from Morocco. They were pleased to hear that I was reading about their fellow countryman, Ibn Battuta. Names and emails were exchanged. Who knows? Someday I may meet Moulay, Sara and Limame for coffee in a souq in Marrakesh.

Images of Morocco emerged of Sigmund Romberg’s show “The Desert Song” from my teenage Singing Hollow Operetta days at the Sharon Playhouse. Once again my travels had a soundtrack, this time with Gordon MacRae crooning:

“Blue heaven and you and I,

And sand kissing a moonlit sky.

A desert breeze whisp’ring a lullaby,

Only stars above you

The Desert Song is an operetta with music by Sigmund Romberg. It was inspired by the 1925 uprising of the Riffs, a group of Moroccan fighters, against French colonial rule.

“Ho! That’s the sound that comes to warn you.

So! In the night or early morning, you know,

The Riffs will strike with a blow,

That brings you woe.”

On this part of my journey, I traveled on the Crescent, Amtrak’s New Orleans to New York City route. Meals in the railroad dining cars can be delightful social experiences. The head waiter seats you at a table with three other travelers, and one is treated to conversation, food and passing scenery. My experience during lunch as we cruised through Tuscaloosa was a good example. One of my dining companions was an 82-year-old lady who had just returned from a photographic safari in Kenya.

The conversation with that globetrotting grandmother made me think about Ibn Battuta, who has been celebrated as one of the greatest travelers of pre-modern times. His journeys totaled some 75,000 miles – three times that of his European predecessor, Marco Polo. My interest in Ibn Battuta was stimulated by a December 1991 National Geographic magazine, which heralded him as the “Prince of Travelers” in its cover article.

Born into a family of Muslim legal scholars in Tangier, Morocco, Ibn Battuta studied law as a young man. In 1325, at the age of 21, he set off on a pilgrimage (hajj) to the sacred city of Mecca in Arabia. It took him a year and a half to get there, as he visited not only North Africa and Egypt, but also Palestine and Syria on the way.

These meanderings set the tone for his travel, and it was 29 years before he returned home. He followed a circuitous route through Syria, Anatolia, across the Black Sea to Crimea and then north across the windswept Russian steppe to the vast nomad territories of the Golden Horde. He traveled on camelback across the barren deserts of Uzbekistan, over the towering snow-capped Hindu Kush mountain range, and finally arrived in India.

After introducing himself to the famous Sultan of Delhi, Muhammad Ibn Tughlug, he was hired as a judge and worked there for seven years. Later, he traveled to the Maldive Islands, Ceylon, and followed the monsoons to Sumatra, and eventually to China. His return west was equally convoluted, with trips to India, Baghdad, Mecca, Morocco, Mali, Timbuktu, and Spain.

After research in the US Library of Congress, I purchased for my Kindle the book: The Adventures of Ibn Battuta, a Muslim Traveler of the 14th Century, by Ross E. Dunn. Mr. Dunn does a wonderful job of putting Ibn Battuta’s travels in the context of the expanding Muslim world of the 14th century, and explains how the traditions of Islamic hospitality sustained Ibn Battuta on his long journeys. As he traveled, he sought out educated, pious, or powerful Muslims, who usually showered him with hospitality.

Back to the train: Around mid-morning, the Crescent pulled into the station in sundrenched Laurel, Mississippi. Waiting was a herd of little kids, including one young lad who was literally bouncing around the platform in excitement. At first I thought they were waiting for someone, but then they all climbed on board. I learned that these 30 kindergartners were taking this train ride as a field trip. They had arrived earlier on a school bus, and were taking the Crescent home to Meridian, the next stop about an hour up the line. After a few minutes, the kids all came parading through my coach clutching dollar bills on route to buy their snacks in the Lounge Car. That school sure gets my vote for progressive education!

When I stepped down from the Crescent onto the station platform in Lynchburg, Va, my eye was caught by a flash of bright red. Out came the binoculars, and sure enough the crest and strong grosbeak-type beak were unmistakably the Northern Cardinal. Thanks for the official welcome from the State Bird of Virginia!