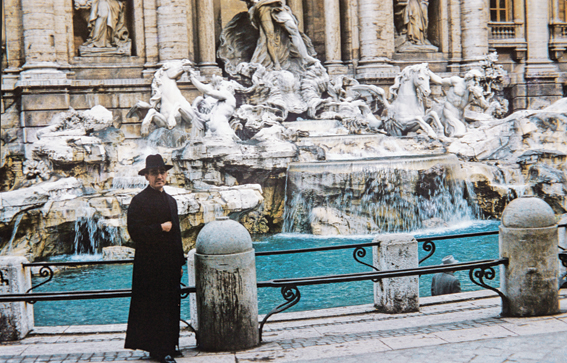 Bishop Romero at the Tivoli Fountain in  Rome in the 1950’s when he was a simple parish priest. The Lutheran and Anglican Churches celebrate his feast day on March 25. Courtesy/Museo de la Palabra y la Imagen

At the end of January, I planned to travel south from Guatemala to Nicaragua to attend a Rotary Project Fair. Planes would be faster, but buses give you a chance to see more of the country. Central America has a great system of public transportation. I chose one of the Tica Bus “Pullmans”, which are as good if not better than Greyhounds. 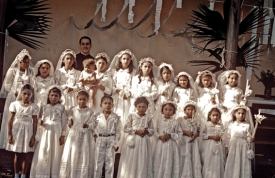 Heading south on the Pan-American Highway, travelers descend a couple of thousand feet from the highlands around Guatemala City. One set of volcanoes is traded for another, and the temperature rose at least 10 degrees as we arrived in the capital of El Salvador.

The trip normally takes two days, with a layover for the night in San Salvador. As this was my first visit, I decided to spend an extra three days exploring the city. My ulterior motive was the opportunity to make a pilgrimage to the tomb of martyred Archbishop Óscar Romero.

El Salvador is one of the original “banana republics”. Historically, a dependence on one or two agricultural products has made the economy susceptible to fluctuations of global commodity prices and interruptions due to earthquakes, volcanic eruptions, and hurricanes.

Economic downturns result in civil unrest, which in turn is met by government suppression, and the governments often run to the United States for military aid to support the ruling elite. Justification depends on the current “Cause du jur”: anti-communism; anti-narcotics; anti-terrorism; and anti-immigration.

Óscar Romero was appointed archbishop of El Salvador during one of these crises in the late 1970’s. Government death squads were killing dissidents and the civil war was heating up. Bishop Romero increasingly spoke out against poverty, social injustice, assassinations and torture in his country. On March 24, 1980, Bishop Romero was murdered while offering Mass in a small chapel at a hospital.

Bishop Romero was buried in the crypt under the Metropolitan Cathedral of San Salvador. His funeral mass was attended by more than 250,000 mourners.

Pope John Paul II visited the tomb of Bishop Romero in 1983, and helped to begin the process for conferring sainthood on Bishop Romero. This effort is being continued under Pope Francis. The Feast Day for Bishop Romero is March 24.

San Salvador is a vibrant and friendly city, and I could have easily stayed longer than three days. Here are two other highlights of my visit:

The Museum of the Word and the Image

Museo de la Palabra y la Imagen (The Museum of the Word and the Image) is a gem of an historical museum in San Salvador. The motto of the museum is “Tejiendo la Memoria” – “Weaving Memory”, which captures what they accomplish in very interesting and educational presentations.

One of their primary exhibits is dedicated to the Salvadorian writer, poet, and painter Salvador Salazar Arrué, known popularly as Salarrué (1899-1975). The exhibit includes some of his personal effects, drawings, and writings.

Another fascinating exhibit is “Cueva de las Pasiones”, the re-creation of the cave of Radio Venceremos. During the civil war, this hidden guerrilla radio station broadcast programming that counterbalanced the government propaganda.

“Prudencia” is a graphically exciting exhibit about

Prudencia Ayala (born in 1895) relating her experiences as a political activist, poet, magazine publisher, and activist for women’s rights (a larger struggle that continues today).

The museum is building interesting collections of photographs. Particularly striking and poignant are series on the Civil War, including  the massacre at Mozote. Another series features Óscar Romero when he was a priest in the 1950’s, with photos taken in El Salvador, Mexico, and Rome. A new exhibit deals with Salvadoran emigration to the US.

On the western side of Plaza Barrios in the historic center is the Palacio Nacional (the National Palace), built in the early 1900’s. After the earthquake in 1986, most government functions offices moved out. The National Archives take up the first floor. The restoration of this ornate Neoclassical palace continues. The upper galleries have the beginnings of a museum for the history of the building and of San Salvador. There is a collection of old musical instruments.

A curious historical artifact in one room is the bench on which President Manuel Enrique Araujo was assassinated in 1913. If you get tired, you can walk down to the interior courtyards, which offer pleasant and quiet places to sit and relax. Don’t worry – President Araujo’s bench is far away on the second floor.