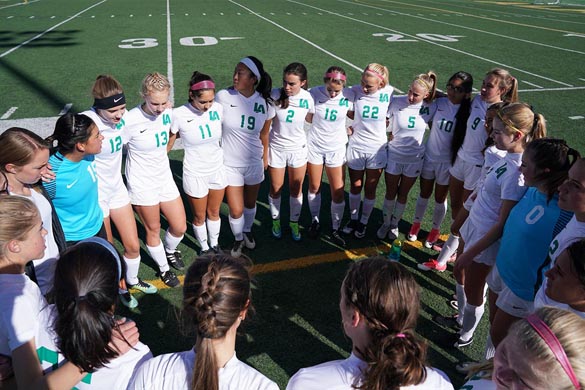 The Topper soccer team huddles-up before their first game of the state championship playoffs.  Photo by John McHale/ladailypost.com 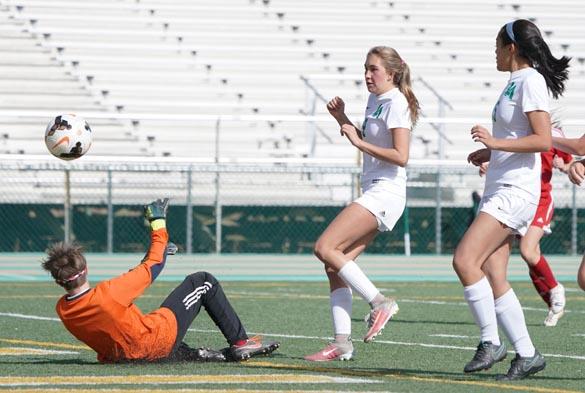 Elsa Gram finds the net for a goal as Isabella Hodges follows. Photo by John McHale/ladailypost.com
By RJ Montaño
Los Alamos Daily Post
rjmontano@ladailypost.com
The New Mexico Activities Association had multiple chances to get the girls’ soccer playoff bracket correct. With revisions that dropped the Los Alamos Hilltoppers from the fifth seed to the sixth, the NMAA essentially rewarded St. Pius for not playing as many games as the ‘Toppers, and they also removed Santa Teresa from the field after originally seeding the Desert Warriors 12th.
Many considered the Hilltoppers a top-four team before the seeds were announced last week. The question was who would get the final bye between Farmington and Los Alamos, who had nearly identical résumés. The Scorpions ended up getting the fourth seed, while Los Alamos fell to sixth in the final revision.
St. Pius played four less games than Los Alamos, and lost their head-to- head match with the Hilltoppers, but were moved from the sixth to the third seed by the time the final revised seeding were announced.
With that aside, #6 Los Alamos essentially had a bye, facing the #11 th seeded Grants Pirates on Saturday morning. The Hilltoppers scored early and often to beat the Pirates 10-0 in 40 minutes, when the game was called by mercy rule.
The Los Alamos offense was very effective against the Pirates, scoring 10 goals on 20 shots, and getting an assist for every goal.
Junior Alix Hailey set the ‘Topper offense in motion by scoring a pair of goals about 45 seconds apart from each other in the fourth and fifth minutes of the game. The first goal came off a corner kick by fellow Junior Alissia Haagenstad, and the second Hailey walked in off a steal.
Sophomore Alyssa Parker placed a perfect pass to Senior Elsa Gram who knocked the ball into the net, for the third ‘Toppers goal in six minutes. Junior Katie Hopkins joined in on the action by walking in a goal right past the Grants goalkeeper in the 10 th minute, followed by Junior Peyton Hobbs scoring with a strike that hit the goalpost, but had enough spin to roll past a diving Pirate goalkeeper for the 5-0 lead.
Sophomore Kaitlyn McGrane joined in the scoring frenzy, putting a Pirate rebound into the back of the net in the 22 nd minute.
The next sequence was filled with action, as Haagenstad would pick up her third assist by finding Gram all alone in front of the net for an easy goal. Forty seconds later, McGrane would streak down the field to net another ‘Topper goal for the 8-0 lead.
Gram would score another goal in the 34 th minute before a Hailey to Hopkins corner kick in the 40 th minute would end the match at 10-0.
“The goals were all so good, and they epitomize what we’ve been working on all week and brought everything together that we’ve been working on. It’s hugely gratifying, not only for the coaching staff, but also the players,” Head Coach Ann Cernicek said after the match.
“What a great day to play soccer. The weather was great, the stands were full, and we got to work on some things,” Cernicek added.
The ‘Toppers did more than “work on some things” Saturday morning. They used the match versus Grants as a warm up for a quarterfinal rematch against the #3 St. Pius Sartans on Thursday morning at the Bernalillo soccer complex.
“When you look at how much we’ve improved [since playing St. Pius] you have to imagine they’ve improved a lot, too,” Cernicek said about the rematch against the Sartans. “I expect the long ball over the top, which we’ve played a lot of teams who like to do that. It’ll be a more physical game.”
“You look at all the hours these athletes have put in since Aug. 7, it’s nice that we can get a draw of people who are not just parents, but friends, family, and neighbors,” Cernicek said about the large attendance. The ‘Toppers could use the help of any fans they can draw on Thursday. The Bernalillo Soccer Complex is a short 15-minute drive for most St. Pius fans.
Up Next
Quarterfinal Match: #6 Los Alamos vs. #3 St. Pius, 9:30 a.m. Thursday, Nov. 2, at the Bernalillo Soccer Complex. 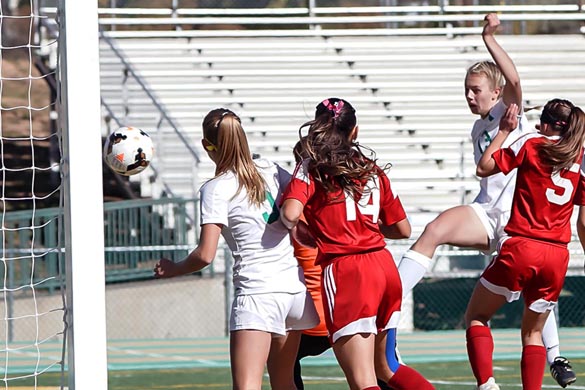 Alix Hailey started the scoring off at the very beginning of the match. Photo by John McHale/ladailypost.com 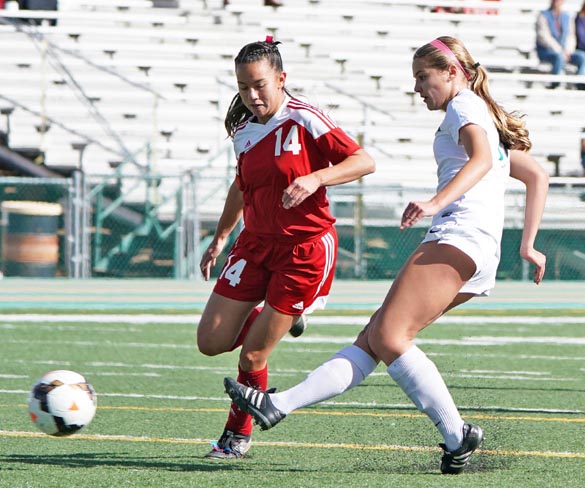 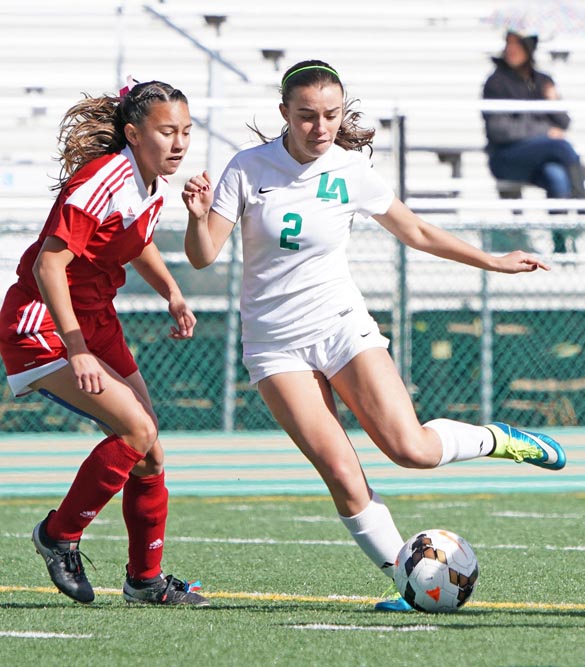 Jennifer Page forwards the ball from near mid field. Photo by John McHale/ladailypost.com 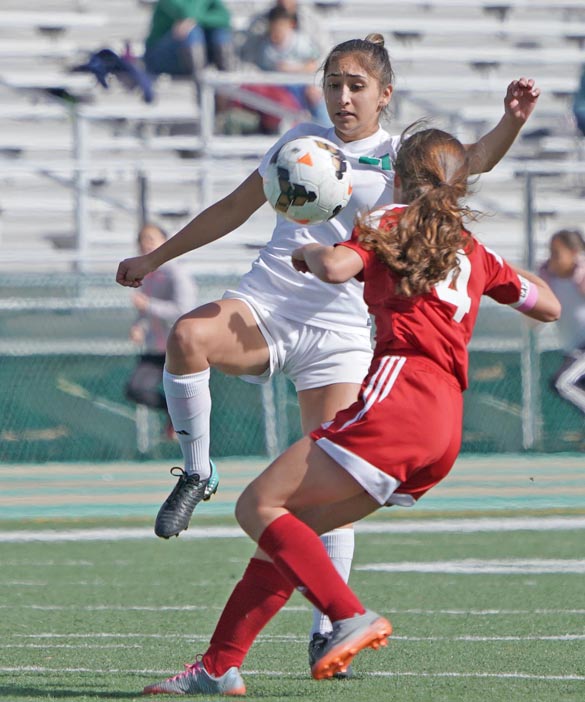 Alissa Hagenstad takes control of the ball from a Pirate defender. Photo by John McHale/ladailypost.com 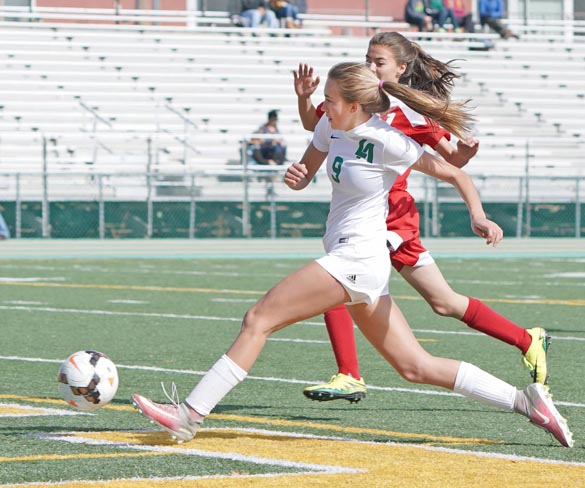 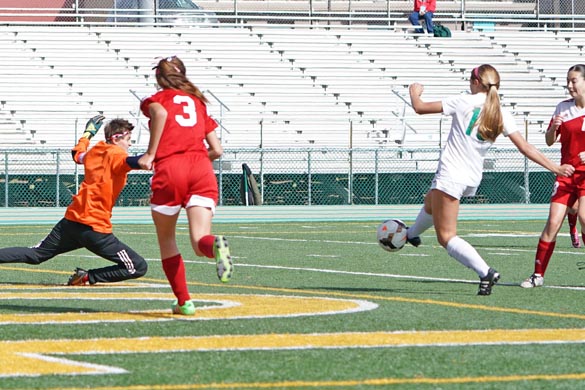