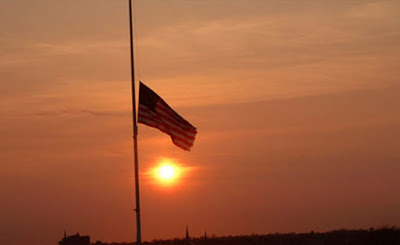 SANTA FE — Governor Susana Martinez has issued an executive order for flags to be flown at half-staff from sunrise to sunset today, March 25, 2017 in honor and mourning of U.S. Air Force Major Andrew Becker.

Major Becker and his crewmates Capt. Kenneth Dalga and Capt. Frederick Dellecker were killed in the line of duty March 14, 2017.

FLAGS FLOWN AT HALF-STAFF IN HONOR AND MOURNING OF U. S. AIR FORCE MAJOR ANDREW BECKER

WHEREAS, U.S. Air Force Major Andrew Becker was killed in the line of duty along with his two crewmates on March 14, 2017, when their U-28A aircraft crashed near Cannon Air Force Base;
WHEREAS, Major Becker earned his commission as an Air Force officer through the Reserve Officer Training Corps program at Embry-Riddle Aeronautical University;
WHEREAS, Throughout his Air Force career, Captain Becker served numerous assignments at home and around the world, including several deployments in support of counterterrorism operations abroad;
WHEREAS, In 2013 Becker was selected to serve with the 318th Special Operations Squadron at Cannon Air Force Base, where he participated in three additional overseas deployments;
WHEREAS, While serving with the 318th, Becker had been selected to begin training Air Force pilots at the Naval Air Station Pensacola in Pensacola, Florida;
WHEREAS, Becker was posthumously promoted to the rank of Major;
WHEREAS, Major Becker was a native of Novi, Michigan, and is survived by his wife Shelly, parents Gary and Stacey, and sister Betsie;
NOW, THEREFORE, I, Susana Martinez, Governor of the State of New Mexico, by virtue of the authority vested in me by the Constitution and Laws of the State of New Mexico, do hereby order that all flags be flown at half-staff from sunrise to sunset on Saturday, March 25, 2017, the day of Major Becker’s funeral services. The hearts of the people of New Mexico go out to his family and fellow service members in memory of his service and sacrifice.
Menu
Los Alamos
59°
Clear
6:56am6:56pm MDT
Feels like: 57°F
Wind: 6mph SW
Humidity: 20%
Pressure: 29.89"Hg
UV index: 0
ThuFriSat
min 59°F
82/57°F
81/57°F
Weather forecast Los Alamos, New Mexico ▸
Previous
Next