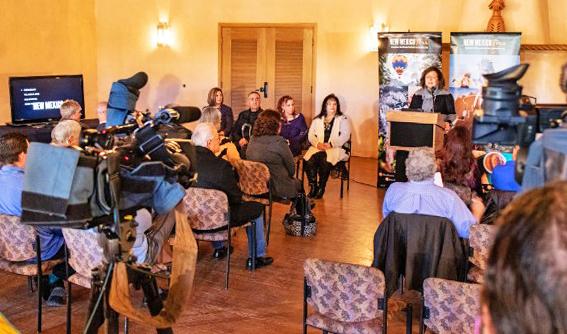 This is the fifth year of the New Mexico True Heroes Program, launched under Gov. Martinez.

“Our 2018 New Mexico True Heroes are leaders in their communities and work hard day in and day out to make our state a wonderful place to call home,” Martinez said. “Today we’re recognizing New Mexicans who lead by example to help people and make their communities better. Each of them, through their commitment, compassion, and service, exemplify daily what it means to be New Mexico True.”

Kym Sanchez of Taos is a veteran of the U.S. Army who was responsible for the coordination of 187 military funerals resulting from the conflict in Iraq. This highly stressful and emotional work left Kym suffering from Post-Traumatic Stress Disorder, made worse when her husband was killed in action in Baghdad in 2007. Driven by her own need for support, Kym founded the Not Forgotten Outreach in 2013 to serve veterans and military families in northern New Mexico through respite, wellness, job training and rehabilitation.

Robin Brulé of Albuquerque has been serving others for as long as she can remember. As Senior Vice President at Nusenda Credit Union, Robin plays a key role in advancing community improvement efforts through support and financing. She gives her time and talents to multiples boards and commissions across the Duke City, most notably as the Chief Strategist for Albuquerque’s broad-based integration initiative, City Alive.

Gene Pino spent 28 years working to keep kids active in sports as a teacher, coach, and upper level administrator in Albuquerque. Outside of school, he served as a board member for both the New Mexico Activities Association and New Mexico Sports Hall of Fame. In 2011 Gene was diagnosed with ALS, a progressive disease that has robbed him of his physical abilities. He is now an active member in the New Mexico ALS chapter, offering his leadership and positive attitude to raise funding that benefits their educational and outreach programs.

Yolanda Diaz learned about a community need in Las Cruces when her father was diagnosed with lung cancer, and again when her son was diagnosed years later.  Few resources were available for those suffering from cancer so “Yoli” founded CARE (Cancer Aid Resource and Education) to help patients and their families deal with the emotional and financial need that comes with a diagnosis. Since 2009 the all-volunteer operation has raised more than $600,000 to ease the burdens of those dealing with cancer, providing dignity and courage on their journey.

“New Mexico True Heroes gives us an opportunity to highlight our state’s greatest treasure: our people,” Tourism Department Cabinet Secretary Rebecca Latham said. “This year’s class of New Mexico True Heroes are truly exemplary, and show that New Mexico is home to resilient, hardworking people who care about their state and their communities.”

“New Mexico is full of amazing stories and amazing people and we are thrilled to be able to honor this group of New Mexico True Heroes at New Mexico’s premier sports event,” New Mexico Bowl Executive Director Jeff Siembieda said. “ESPN and the New Mexico Bowl say ‘thank you’ to these heroes who make our state better each and every day.”