¡Globalquerque! New Mexico’s Annual Celebration of World Music & Culture, the Southwest’s biggest world music and culture party, will again descend on the National Hispanic Cultural Center (NHCC) along the banks of the Rio Grande in Albuquerque.

¡Globalquerque! Is celebrating 10 years of successfully mixing the most eclectic lineups of world-class acts from across the planet – from the traditional to the cutting-edge – the legendary to up-and-coming new discoveries! ¡Globalquerque! will bring the world to Albuquerque Sept. 19 and 20. 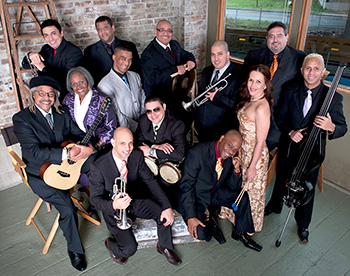 The Afro-Cuban All Stars. Courtesy/¡Globalquerque!

Enjoy performances on three stages – the charming Fountain Courtyard, the expansive Plaza Mayor and the state-of-the-art Journal Theatre. In addition to the evening performances, each year ¡Globalquerque! presents the popular Free Daytime Global Fiesta on Saturday.

Musical and cultural surprises are around every corner. The ever popular Global Village of Craft, Culture & Cuisine, replete with booths featuring art work, artisan crafts and gourmet international cuisine, is open throughout the festival.

This year ¡Globalquerque! is expanding its partnership with the National Hispanic Cultural Center to present the month-long International Cinema Series featuring six films from around the globe spanning all genres, including music, documentary, comedy and drama. Four films will be presented free each Thursday in September in the Bank of America Theatre at the NHCC, with two films screening during the festival’s Free Daytime Global Fiesta Saturday, Sept. 20 in the Wells Fargo Theatre. Films include A Thousand Voices (New Mexico, USA), Alamar (México), The Piano in a Factory (China), Seen But Not Heard (USA), We Are Together (South Africa) and The Wind Journeys (Colombia).

Called a “Top Ten End of Summer Destination Event” by The Los Angeles Times, ¡Globalquerque! is one of America’s fastest-growing, most creatively programmed world music festivals, drawing fans from around the region, across the country, and beyond for a very affordable cultural excursion.