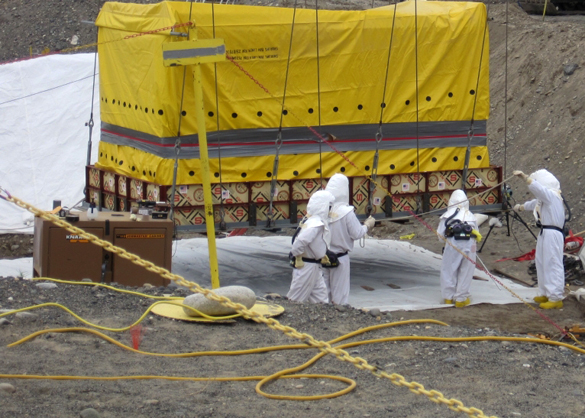 Workers on a cleanup site at DOE’s Hanford Site in southeastern Washington State, one of several sites sampled for uranium and plutonium variations. Courtesy/DOE

Knowing how a chemical in soil reacts and transforms over time in response to neighboring elements, weather and heat is essential in determining whether that chemical is hazardous.

This is especially important when that chemical is radioactive.

In a collaborative, international effort led by Los Alamos National Laboratory, researchers determined the speciation of uranium and plutonium pulled from soil, concrete and water reservoir sediment from six locations in the U.S., Ukraine and Russia. Speciation is the chemical form or compound in which an element can appear, for example as nitrogen can form species of nitrate, nitrite or ammonia, among others.

“These results demonstrate the complexities of actinides in the environment and suggest that our models will not always accurately predict their long term fate and transport,” said Robert Roback, a Los Alamos Earth and Environmental Sciences Division deputy group leader and coauthor on the paper.

Results clearly identified novel aspects of uranium and plutonium environmental chemistry beyond those previously reported and expected based on thermodynamics. In some samples, actinide-bearing materials that were within millimeters of each other for decades still exhibit significantly different speciation.

These results, the authors note, demonstrate complexities of actinides in the environment that are likely linked to the initial depositional form as well as to their subsequent mobilization and deposition.

“These results do not necessarily imply increased environmental risk, however, because some forms are quite stable and have low solubility,” Roback said.

The results imply that to understand predict uranium and plutonium behavior in the environment, the analysis must consider site conditions, he said.

The researchers published their findings in a cover article, “Multiscale Speciation of U and Pu at Chernobyl, Hanford, Los Alamos, McGuire AFB, Mayak, and Rocky Flats” [link: http://pubs.acs.org/doi/abs/10.1021/es506145b] recently published by the American Chemical Society’s journal Environmental Science and Technology.

The researchers identified four types of both equilibrium species (mostly stabilized) and unpredicted novel types of these actinides unassociated with the source, which helped elucidate if and how the various forms of the elements may have been transformed by chemical reactions in the environment.

The chemical speciation of potentially hazardous subsurface contaminants is crucial to assessing environmental risk and remediation, because it determines the contaminants’ transport and toxicology. Understanding the behavior of uranium and plutonium contamination is imperative since not knowing the behavior is a significant impediment to environmental restoration at legacy nuclear weapons’ production and testing sites plus reactor accident locations.

Materials from some of these sites involved high temperatures, melting, fires and explosions. In some cases, uranium and plutonium were known or suspected to have been released in acidic solutions that reacted with soil or concrete components. The goal was to determine the range of behavior in contamination and releases caused by chemical reactions.

Higher temperatures (such as in the Chernobyl explosion and fire) promoted reactions and materials mixing. Samples revealed that in some cases particles melded without significant mixing, whereas other actinide particles intermingled with other metals, air and water to give a more homogenous mixture.