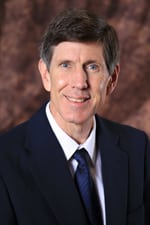 By Timothy A. Glasco, Utilities Manager
Department of Public Utilities

On April 10 the Board of Public Utilities and the County Council will convene to consider approval of a Power Sales Contract (PSC) with the Utah Associated Municipal Power Systems (UAMPS) organization, to continue our participation in the Carbon Free Power Project. This will be the world’s first small modular nuclear reactor power generation plant. Located in Idaho, this 600MW facility is scheduled to be operational by 2027.

Over the past four years a fatal flaw analysis was conducted, and the project was discussed at numerous meetings with the public, BPU and County Council.  Now is the time to decide if we continue in the Project or withdraw, prior to the development of a combined operating licensing application to the Nuclear Regulatory Commission.

Why is the County interested in this nuclear generating plant project, and why now?

The vision statement for the Department of Public Utilities (DPU) is to be a high-performing utility matched to our community, contributing to its future with diversified and innovative utility solutions.  Our community has indicated that it supports clean energy and our Board of Public Utilities (BPU) adopted a goal for us to be a carbon-neutral electrical energy provider by 2040.  Further, now is the time to be thinking about the county’s energy future.  In 2022 we will lose 36MW of firm base load power when the San Juan Generating Station (a coal-fired plant) is shut down.

DPU has been exploring ways to make up for this loss of power supply in a way that will accomplish our carbon neutral goal and provide base load power that will complement our existing and planned future renewable power resources.  On average our community, excluding LANL, consumes 122,000 megawatt-hours (MWH) of power per year.  We presently operate two hydroelectric generating plants, one at El Vado the other at Abiquiu.  Together they provide 62,000 MWH of renewable energy during an average year.  We also have 1MW of solar/PV (1,700 MWH per year), and in the near-term, plan to add another 1MW for a combined total of 3,500 MWH per year.  Unfortunately, solar/PV systems only operate about 20% of the time, so a base load resource is necessary for the 80% of the time when the system is not producing power.

The forecast for the County’s energy demand is 140,000 MWH by 2027.  We intend to meet this demand with a diverse portfolio of generation resources that will consist of 66,500 MWH of nuclear, and 63,500 MWH of renewables (62,000 MWH from our existing hydroelectric facilities, and 11,500 MWH from solar).  This will result in a mix of 44% nuclear and 56% renewable energy: 100% carbon free. Diversification of resources will ensure firm, dependable power at a reasonable cost to our citizens.

It is through UAMPS that the County can join this Carbon Free Power Project. We are one of 46 municipal-owned electric systems that comprise UAMPS through a joint powers agreement.  The 32 members that subscribed in the Project have similar values and goals for their communities.  Only by joining together are we able to be participant/owners in a nuclear facility.

By signing the PSC on April 10, the County commits to an 8MW participation in the Project through its expected 60 to 80-year life, after which we will participate in decommissioning and demolition.  We acknowledge that this is not a small decision.  Especially, when one considers the amount of future uncertainties, and that the estimated cost is at $4.2 billion, of which the County’s share would be $56 million.  To mitigate these unknowns, the PSC incorporates three “off-ramps” by which we can exit before construction begins.  This provision allows us to weigh the Project’s viability as more information becomes available.

The first off-ramp is March 2019.  At present, only 180 of the 600MW are subscribed.  UAMPS is negotiating with several other entities to subscribe the remaining 420MW.  It is expected that by this time next year the project will be fully subscribed.  Total project development expenditures will be $6 million. With cost sharing by the Department of Energy and NuScale (the developer of the small modular reactors), actual out-of-pocket costs to UAMPS will be $1.5 million, with a maximum cost to Los Alamos at $80,000. Should UAMPS terminate the project, we receive a full refund of our development costs. Should UAMPS decide to continue and we determine to unilaterally exit, we forfeit our investment, however, we can still sell our 8MW shares to recoup our money if there is an interested participant.

If the project moves forward into the construction phase in 2023, and we did not exercise our right to exit the Project at the three off-ramps, we are bound by the PSC for the life of the plant.  As with most generating plant participation agreements, it is set up as a take-or-pay type arrangement.  While our $56 million capital investment is being paid off, the targeted cost of power is $65/MWh.  When the debt is retired in approximately 40 years, the expected cost of this power will decline dramatically.

We are a county-owned utility that strives to be matched to its community.  It is important for our citizens to let members of the BPU and Council know your sentiment.  I encourage you to attend the Tuesday, April 10 joint meeting at 6 p.m. in Council Chambers and be part of the decision.