Get Ready For A Sky Ride 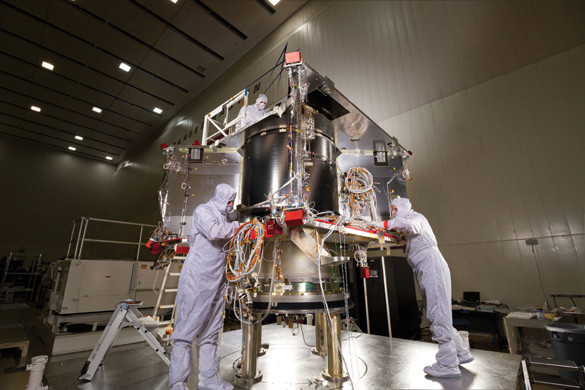 In a clean room facility near Denver, Lockheed Martin technicians began assembling a NASA spacecraft that will collect samples of an asteroid for scientific study. Courtesy/Lockheed Martin 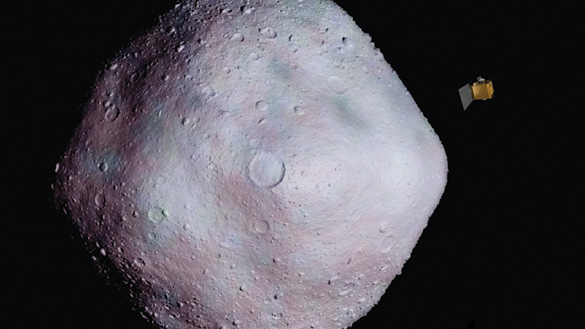 Left, an artist rendering of the spacecraft OSIRIS-REx. Courtesy/NASA. Above, OSIRIS-REx moves in to position to perform a touch-and-go operation to collect samples from the surface of the asteroid. Courtesy/NASA

Today, the home team of planet Earth embarks on an exciting adventure that will collect many valuable terabytes about where we came from and where we’re going. What we learn may even help us save the planet someday.

NASA’s OSIRIS-REx spacecraft is expects to lift off this evening on an extraordinary, seven-year odyssey to a little lemon-drop of an asteroid formerly known as Survey Asteroid R036, but now known as Bennu. Nine-year-old Michael Toler Puzio of North Carolina came up with that prize-winning name in a contest sponsored by the Planetary Society.

Puzio’s research on the Egyptian god-king Osiris, from whom the mission gets its name, uncovered a set of associated symbols, the crook and flail, and the god’s familiar companion, a gray heron, a primitive supernatural named Bennu. Puzio said the spacecraft’s single robotic arm (that will reach down to the surface of the asteroid to harvest samples to bring back to Earth) reminded him of the heron, which so often seems to stand in shallow water on one leg.

There will be much to learn about the past, the present and the future, in NASA’s third mission in its New Frontiers series that has included the Juno mission to Jupiter and the New Horizons exploration of Pluto. This time, it’s all about the asteroid Bennu, the little squirt of compacted, carbon-rich compounds that has been around for four and a half billion years or so, bearing evidence of the original cloud of dust, probably from a supernova explosion, that came to form our solar system.

The program for OSIRIS-REx is coded in its name: The Origins, Spectral Interpretation, Resource Identification, Security-Regolith Explorer. Each word or phrase, when you know the keys, opens up into an extensive outline of mission intentions. Resource Identification is the part of the mission having to do with asteroid mining prospects, which evokes romantic notions of whaling and gold rush prospecting. Regolith is the surface material that will be sampled from the asteroid.

But let’s skip ahead for now to the last S in OSIRIS, which in this case stands for Security. The asteroid now named Bennu  is classified as a Near Earth Object, which means that it comes within 1.3 Astronomical Units. One AU is about the distance from the Earth to the Sun.

But more to the point Bennu has been classified as a Potentially Hazardous Asteroid, which means it’s a certain size and has the potential to strike the Earth and cause considerable damage. In fact, Bennu has a “high probability” of impacting Earth in the late 22nd century, and the project engineers have calculated that if Bennu  struck Earth, it would be the equivalent of a 3,000 megaton nuclear explosion, like hundreds of nuclear weapons blasting one place all at once.

Los Alamos National Laboratory scientists in collaboration with colleagues around the country have been interested for some time in issues involving planetary defense against the low-probability, high consequence hazard of an asteroid or meteor strike. As a preliminary measure, LANL theoretical physicist C.S. Plesko has been working with counterparts at sister laboratory Lawrence Livermore National Laboratory to study how such hazards might be mitigated.

One set of responses could involve deflection or disruption of the object with a nuclear burst, or with a non-nuclear kinetic force, or some combination of the two. Researchers have modeled various hypothetical scenarios, but the OSIRIS-REx mission had a special opportunity to ground the theories more thoroughly in reality with a comprehensive astronomical campaign.

Before blast-off, as OSIRIS-REx Principal Investigator Dante Lauretta described  it, every effort was extended to make Bennu  “one of the best-characterized near-Earth asteroids,” taking advantage of three close approaches between 1999 and  2011 to measure a wide range of properties, including chemical, physical and dynamical features. Visual observations were also made with the Spitzer Space Telescope and the Hubble Space Telescope Wide-Field Camera.

“We are using the OSIRIS-REx team’s pre-launch understanding of asteroid Bennu as an estimate of the most information we would have before a mitigation attempt. In the majority, we expect to know less,” the impact hazard mitigators reported to a Lunar and Planetary Science Conference in March this year.  They will rely on the actual data from the OSIRIS-REx mission to compare their assumptions.”

The mitigation strategy team sees potential advantages over alternatives like pulsed lasers and focused solar reflectors as diversion factors. The nuclear or kinetic bursts are better in terms of readiness time and likely effectiveness, but the same blasts also depend on detailed information about the structure and composition of the potential hazard, because an explosion might cause it to break into pieces that could be as bad or worse than the asteroid itself. Will we have enough information to trust some form of bombardment?

This is one of many questions that will be riding on this voyage.