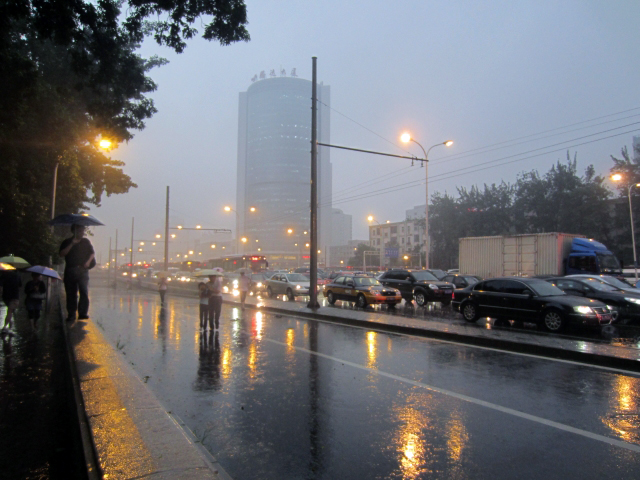 The international study finds that a massive increase in greenhouse gases and warming of the planet would spur a nearly 7 percent global increase in precipitation, on average, compared to preindustrial conditions.

But, trying to resolve the problem through “geoengineering” could result in important seasonal rainfalls, known as monsoonal rains, in North America, East Asia, and other regions dropping by 5-7 percent compared to preindustrial conditions. Globally, average precipitation could decrease by about 4.5 percent.

“Geoengineering the planet doesn’t cure the problem,” said Simone Tilmes of the National Center for Atmospheric Research (NCAR) in Boulder, Colo., and lead author of the new study. “Even if one of these techniques could keep global temperatures approximately balanced, precipitation would not return to normal conditions.”

As concerns have mounted about climate change, scientists have studied geoengineering approaches to reduce future warming. Some of these would capture carbon dioxide before it enters the atmosphere. Others would attempt to shade the atmosphere by injecting sulfate particles into the stratosphere or even launching mirrors into orbit with the goal of reducing global surface temperatures.

The new study focuses on the second set of approaches, those that would shade the planet. It warns however, that Earth’s climate would not return to its preindustrial state even if the warming itself were successfully mitigated.

“It’s very much a pick-your-poison type of problem,” said John Fasullo, also of NCAR and a study co-author. “If you don’t like warming, you can reduce the amount of sunlight reaching the surface and cool climate. But if you do that, large reductions in rainfall are unavoidable. There’s no win-win option here.”

The study appears in an online issue of the Journal of Geophysical Research: Atmospheres, published this week by the American Geophysical Union. It was written by an international team of scientists from NCAR and 14 other organizations, and was funded in part by the National Science Foundation (NSF), which sponsors NCAR. The team used, among other tools, the NCAR-based Community Earth System Model, which is funded by NSF and the Department of Energy.

Future carbon dioxide, with or without geoengineering

The scientists chose the artificial scenario of a quadrupling of carbon dioxide levels, which is on the high side of projections for the end of this century, in order to clearly draw out the potential impacts of geoengineering.

In line with other research, they found that an increase in carbon dioxide levels would significantly increase global average precipitation, although there would likely be significant regional variations and even prolonged droughts in some areas.

Much of the reason for the increased rainfall and snowfall has to do with greater evaporation, pumping more moisture into the atmosphere as a result of more heat being trapped near the surface.

The team then took the research one step further, examining what would happen if a geoengineering approach partially reflected incoming solar radiation high in the atmosphere.

The researchers found that precipitation amount and frequency, especially for heavy rain events, would decrease significantly. The effects were greater over land than over the ocean, and particularly pronounced during months of heavy, monsoonal rains. Monsoonal rains in the model simulations dropped by an average of 7 percent in North America, 6 percent in East Asia and South America, and 5 percent in South Africa. In India, however, the decrease was just 2 percent. Heavy precipitation further dropped in Western Europe and North America in summer.

The researchers found two primary reasons for the reduced precipitation.

One reason has to do with evaporation. As Earth is shaded and less solar heat reaches the surface, less water vapor is pumped into the atmosphere through evaporation.

The other reason has to do with plants. With more carbon dioxide in the atmosphere, plants partially close their stomata, the openings that allow them to take in carbon dioxide while releasing oxygen and water into the atmosphere. Partially shut stomata release less water, so the cooled atmosphere would also become even drier over land.

Tilmes stressed that the authors did not address such questions as how certain crops would respond to a combination of higher carbon dioxide and reduced rainfall.

“More research could show both the positive and negative consequences for society of such changes in the environment,” she said. “What we do know is that our climate system is very complex, that human activity is making Earth warmer, and that any technological fix we might try to shade the planet could have unforeseen consequences.”