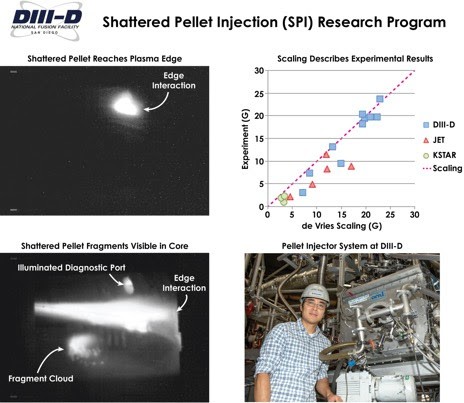 The Shattered Pellet Injection (SPI) research program at DIII-D has recently contributed to an international investigation that identified a common physics basis in the behavior of this disruption mitigation technique. The left column shows two camera images as a shattered pellet reaches the plasma edge (left-top) and then as shards reach the core (left-bottom). The magnetic instabilities measured during deuterium SPI shutdowns show common behavior across DIII-D, JET, and KSTAR (right-top), pointing to common physics that can be extrapolated to future devices. The Oak Ridge National Laboratory (ORNL) leads pellet injection research efforts at DIII-D, with Dr. Daisuke Shiraki shown next to one of the ORNL pellet injection systems (right-bottom). Courtesy/General Atomics

SAN DIEGO — An important technique for protecting future fusion energy devices is advancing for use in the world’s largest fusion experiment after validation by an international research team.

Originally developed at the DIII-D National Fusion Facility, which is operated by General Atomics (GA) as a User Facility of the U.S. Department of Energy (DOE) Office of Science, the approach will help manage plasma instability for the international ITER experiment under construction in France.

Specific events during operation of a fusion device can allow hot plasma fuel to rapidly escape the confining magnetic fields. Referred to as “plasma disruptions”, these events can result in the energy contained in the plasma causing damage to the device’s walls.

Based on this work, an international Disruption Mitigation Task Force, established by the ITER Organization, selected SPI as the disruption mitigation technique for ITER. The task force works with facilities around the world to improve the design basis for SPI through experiments and modelling. Experiments at DIII-D are part of this global effort, and the experimental group of the task force is led by GA scientist Nick Eidietis.

“Preventing and mitigating plasma disruptions is key for developing tokamak-based fusion power plants,” DIII-D scientist Daisuke Shiraki said, an ORNL researcher who was part of the U.S. team during the international project to prepare SPI for ITER. “This collaboration was successful in testing the SPI technique at multiple facilities worldwide, demonstrating its usefulness for future devices.”

DIII-D is the largest magnetic fusion research facility in the United States. The heart of the facility is a tokamak that uses powerful electromagnets to produce a toroidal (doughnut-shaped) magnetic bottle for confining a fusion plasma.

Plasma is the fourth state of matter in which electrons are stripped from the atoms, producing a highly ionized “soup” of nuclei and electrons that can be controlled by magnetic fields. On ITER, plasma temperatures more than 10 times hotter than the Sun will be achieved. At such extremely high temperatures, hydrogen isotopes are forced by powerful magnetic forces to fuse together and release energy.

The plasma-facing inner wall in DIII-D is built of graphite that allows for disruption experiments that do not damage the device. However, as fusion devices with metal walls increase in scale and power to the levels required in power plants, the potential damage from such disruption events becomes increasingly significant. Fusion scientists have worked on techniques to mitigate this damage for many years.

The SPI technique developed at DIII-D uses rapid injection of cryogenic shards into the plasma. The quantity, composition, and sequence of pellets can be tailored for most efficient mitigation. To optimize SPI for ITER, studies on other tokamaks were conducted to improve the physics understanding of the SPI shutdown process.

With support of the ITER Organization and Disruption Mitigation Task Force, DIII-D scientists worked with international collaborators at the JET tokamak in the United Kingdom and the KSTAR tokamak in South Korea. The SPI systems for these tokamaks were developed by ORNL, which also leads the implementation and operation of multiple disruption mitigation systems at DIII-D.

By comparing SPI performance on the three devices, the team found common physics that applied across the facilities. The scientific results of this work were presented at a conference held by the International Atomic Energy Agency last year.

The effort was also selected by the DOE as a 2021 Fusion Energy Sciences Joint Research Target, which analyzed results from experiments carried out at DIII-D, JET, and KSTAR, and identified areas of common findings and remaining issues for future research.

Since the dawn of the atomic age, General Atomics innovations have advanced the state of the art across the full spectrum of science and technology – from nuclear energy and defense to medicine and high-performance computing. Behind a talented global team of scientists, engineers, and professionals, GA’s unique experience and capabilities continue to deliver safe, sustainable, economical, and innovative solutions to meet growing global demands.

About the DIII-D National Fusion Facility.

DIII-D is the largest magnetic fusion research facility in the U.S. and has been the site of numerous pioneering contributions to the development of fusion energy science. DIII-D continues the drive toward practical fusion energy with critical research conducted in collaboration with more than 600 scientists representing over 100 institutions worldwide. As a U.S. Department of Energy, Office of Science User Facility, participation in DIII-D research is open to all interested parties. For more information, visit www.ga.com/diii-d.