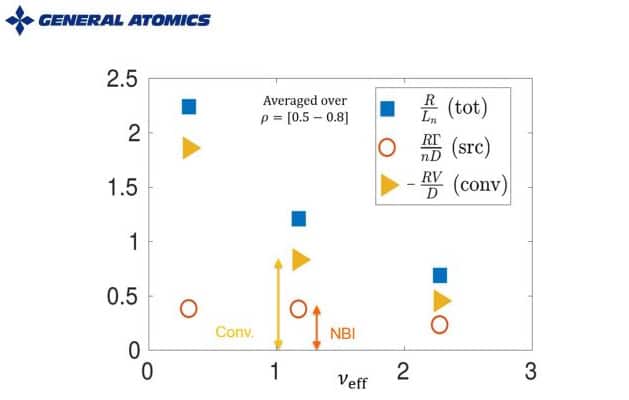 This graphic shows how density peaking increases with decreasing collisionality (blue squares). The largest increase in peaking is directly linked to changes in electron transport (yellow triangles) and not related to changes in direct core fueling (red circles). This highlights that peaked density profiles can be obtained at low collisionality in fusion reactors without core fueling. Courtesy/General Atomics

SAN DIEGO, Calif. — Scientists at the DIII-D National Fusion Facility have made a significant advancement in physics understanding that represents a key step toward practical fusion energy.

The work, published in an article today in the journal Nuclear Fusion, helps better explain the relationship between three variables – plasma turbulence, the transport of electrons through the plasma, and electron density in the core. Because these factors are key elements of the fusion reaction, this understanding could significantly improve the ability to predict performance and efficiency of fusion plasmas, a necessary step toward achieving commercial fusion power plants.

“We’ve known for some time that there is a relationship between core electron density, electron-ion collisions and particle movement in the plasma,” said Saskia Mordijck, who led the multi-institutional research team at DIII-D. “Unfortunately, until now research has not been able to untangle that relationship from the other components that affect electron density patterns.”

DIII-D, which General Atomics operates as a national user facility for the Department of Energy’s Office of Science, is the largest magnetic fusion research facility in the country. It hosts researchers from more than 100 institutions across the globe, including 40 universities. The heart of the facility is a tokamak that uses powerful electromagnets to produce a doughnut-shaped magnetic containment for confining a fusion plasma. In DIII-D, plasma temperatures more than 10 times hotter than the Sun are routinely achieved. At such extremely high temperatures, hydrogen isotopes can fuse together and release energy. (See Fusion Energy 101 explainer below for more detail on how fusion works.)

In a tokamak, fusion power is determined by temperature, plasma density, and confinement time. Fusion gain, expressed as the symbol Q, is the ratio of fusion power to the input power required to maintain the reaction and is thus a key indicator of the device’s efficiency. At Q = 1, the breakeven point has been reached, but because of heat losses, self-sustaining plasmas are not reached until about Q = 5. Current systems have achieved extrapolated values of Q = 1.2. The ITER experiment under construction in France is expected to achieve Q = 10, but commercial fusion power plants will likely need to achieve even higher Q values to be economical.

Because electron density in the plasma core is a critical element of fusion gain, scientists are developing methods to achieve greater peak densities. One previously identified approach that shows promise is reducing electron-ion collisions, a parameter that plasma physicists refer to as collisionality. However, previous research was not able to establish the exact relationship between density peaking and collisionality, nor isolate the effect from other characteristics of the plasma.

The DIII-D team conducted a series of experiments in which only plasma collisionality was varied while other parameters were held constant. The results demonstrated that low collisionality improves electron density peaking through the formation of an internal barrier to particle movement through the plasma, which in turn altered the plasma turbulence. Previous work had suggested the effect might be due to plasma heating by neutral beam injection, but the experiments show that it was linked to particle transport and turbulence.

“This work substantially improves the understanding of electron behavior in the plasma core, which is an area of great importance for increasing fusion gain,” said David Hill, Director of DIII-D. “This is another important step toward practical fusion energy in future commercial reactors.”

General Atomics pioneers technologies with the potential to change the status quo. Since the dawn of the atomic age, GA’s innovations have advanced the state of the art across the full spectrum of science and technology – from nuclear energy and defense to medicine and high-performance computing. Behind a talented global team of scientists, engineers, and professionals, GA delivers safe, sustainable, and economical solutions to meet growing global demands.

About the DIII-D National Fusion Facility

DIII-D is the largest magnetic fusion research facility in the U.S. and has been the site of numerous pioneering contributions to the development of fusion energy science. DIII-D continues the drive toward practical fusion energy with critical research conducted in collaboration with more than 600 scientists representing over 100 institutions worldwide. For more information, visit www.ga.com/diii-d.