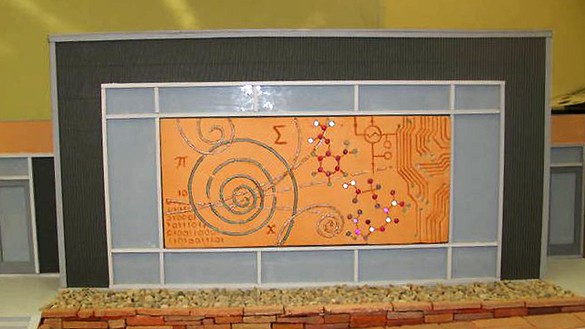 The University of New Mexico-Los Alamos has commissioned Santa Fe artist Nick Gadbois to create a work of art for the UNM-LA campus.

The Local Selection Committee at UNM-LA sought to commission a work that would connect the campus and the Los Alamos community as well as conceptually relate to science, technology, engineering and mathematics.

Finalists were selected in March and a final selection was made earlier this July. Installation of the $57,000 project is scheduled to be completed during fall 2013.

The chosen design is a bas relief mural that will be fabricated from reinforced concrete tinted a terra cotta color.

The design also includes a stone retaining wall, a flagstone walkway and native landscaping. The mural will be 8-feet tall and 18-feet wide.

“The mural faces east and the iridescent glass will be reflected and produce an illuminated effect as you drive along Diamond Drive in front of the campus,” Gadbois said. “You’ll see the sparkle move along the piece as you drive.”

Gadbois took inspiration from ancient petroglyphs, but he decided on the symbols his design incorporates by spending time in the UNM-LA library.

“I wanted to see what the students are looking at — the symbols and imagery is the language being spoken,” Gadbois said. “I’m very attracted to symbols. They are very interesting visually.”

Symbols from mathematics such as Pi are included. Gadbois uses the binary code that underpins computer function as a textual element — almost like wallpaper patterning.

Spirals and models of molecules are also part of the design.

“I’m captivated by spiral designs. From the subatomic level to galaxies, spirals are a central feature of our world — part of the universal order that runs through everything,” Gadbois said. “Connectivity is an important element in the work.”

The molecules introduce geometric elements and have a playful quality. One of the molecules included in the design is an aspirin molecule.

“I wanted to embody the idea of science helping people,” he said.

Gadbois grew up in the Midwest and has been making art since childhood. He is also a professional guitarist and singer.

His training as a graphic artist and illustrator is proving extremely helpful in producing the exact scale drawings that will be used in the fabrication of the concrete in this latest work, he said.

Gadbois holds an MFA from Vermont College. He began his long love affair with concrete in 1990, inspired by the ancient rock art of the Southwest.

Incorporating technology in his work is nothing new to Gadbois. Early castings included using carburetors as molds.

Gadbois has been producing art for the public sector for the past 12 years. His largest public project to date is a series of cement panels set into a wall at the Tri-Cities Cancer Center in Kennewick, Wash. in 2008.

“Artists usually work alone. With a public art piece, they are able to work with others, including fabricators, the selection committee and other artists, in a more social project,” Gadbois said. “I enjoy that aspect very much.”