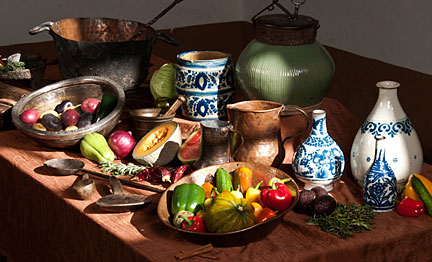 SANTA FE—An exploration of the dawn of world cuisine as we know—and consume it— today, opened last year at the Museum of International Folk Art with “New World Cuisine: The Histories of Chocolate, Mate y Más,” on view through Jan. 5, 2014.

Digging deeper into the topics covered in New World Cuisine will be FUZE.SW 2013. Santa Fe’s first-ever food conference of its kind takes place at the Museum of International Folk Art the weekend of Nov. 8-10.

James Beard Award-winning authors and chefs from across the U.S. will gather with leading historians, archaeologists, cultural commentators and folklorists to discuss and demonstrate how traditions and techniques from diverse heritages have intersected to create a culinary tradition uniquely New Mexican (and transported globally.)

These and others will be woven together by a series of artistic interludes, and keynotes by Dr. Jeffrey Pilcher (University of Minnesota), Maricel Presilla, and Gustavo Arellano – and of course, food.

Festivities begin on the Friday afternoon when Bill and Cheryl Alters Jamison lead an optional cooking class at the Santa Fe School of Cooking on the beloved foods traditionally served during the holidays in New Mexico.

Artistic interludes and hands-on activities throughout the conference as well as a breakfast burrito bonanza and a food truck brunch keep things light.

Find the latest information is at http://fuzesw.museumofnewmexico.org/.