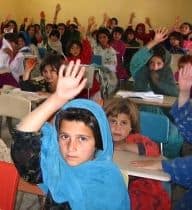 Students at a school in Afghanistan. Photo by Dr. Mohammad Khan Kharoti

Letter from Afghanistan by Bob Fuselier

The following story of my trip to Afghanistan is one of many to follow. For the security of those we leave in Kabul, names of places and people will often be avoided.

Even now, as I prepare to return to the U.S., my mind is still taking in Afghanistan.

The Afghan people and their code of hospitality have allowed my colleague, Blake Batten and I to feel welcomed and at home.

I still remain alert on ventures beyond the multi-layered security of our hotel, but the hypervigilance that followed me on my first few days has faded.

Our ability to move about Kabul and to travel in Helmand Province is a rarity for Westerners.

Many of those we’ve met have expressed a bit of jealousy of our freedom.

To go anywhere, their governments and NGO’s require an armed security escort.

Our defenses are the knowledge and connections of our hosts and the Afghan attire we wear.

We arrived in Kabul about 3 p.m. local time this past Monday.

After negotiating immigration and customs on our own, we met the administrator of Green Village Schools’ Advanced Educ bion Center, Ayub Kharoti, in the airport’s parking lot.

Ayub had arranged for transport to the hotel where we were to stay. Upon our arrival there, we discovered that the room we had reserved was still occupied.

As arrangements for our stay at another hotel were formalized, we were offered chai (tea). Shin (green) and tor (black) tea would be a main source of hydration during our stay.

Our trip to the second hotel, like that of the first, was a chaotic negotiation through cars, bikes and pedestrians.

The entrance to the hotel was, again, a maze of security. The manager of the first hotel accompanied us to assure the price he had negotiated would be what they charged.

It wasn’t. We were given a spacious suite, elegantly addressed in marble. Unfortunately, the AC didn’t work and an odor of sewer gases filled the rooms – obviously, a bargain at $220 plus tax.

Seeing that Blake and I were ready for adventure, Ayub presented us each with a set of Afghan attire made by a friend in Helmand.

The Kamis (shirt) displayed an embroidered front that took, according to a Danish NGO worker, some three months to make.

The shirt ‘tails’ were worn out and extended to the knee. The pertuq (pants) would have made MC Hammer proud. A pakol (round, flat cap) completed the outfit. Blake wore socks and shoes; I wore Burkenstocks. No one seemed to notice.

After taking a few pictures, we headed out for a walk through the streets of downtown Kabul.

Unspoken but on everyone’s minds as we exited the last security door was one question: “Is anyone noticing Blake and I?”

The question was soon answered. After about a block, Ayub, who was in the lead, turned to us with an expression that revealed his thought. “No one sees you!” “Yea,” answered Blake. “We’re in our invisibility cloaks.”

Editor’s note: Bob Fuselier, a veterinarian in Los Alamos, is the founder of the Afghan Sister Village Project. He is a 1982 graduate of the LSU School of Veterinary Medicine. His career has included farm animal medicine and surgery in western North Carolina, public health work in rural Honduras, vascular research in Louisiana and small animal medicine and surgery in Louisiana and New Mexico. He has been joined in his career by his wife and fellow veterinarian, Susan Park Fuselier. They have three adult children and three grandchildren and have lived in Los Alamos since 1993.