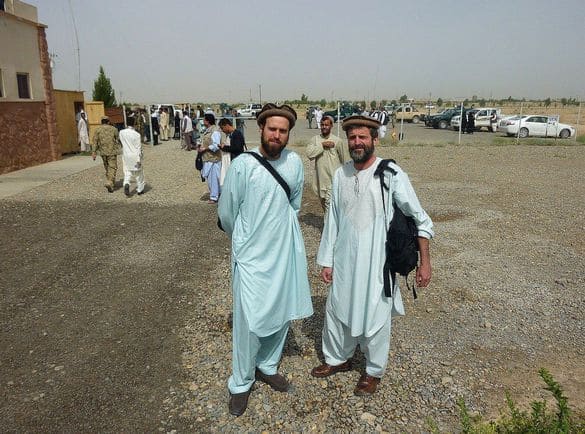 Bob Fuselier of Los Alamos, right, and friend Blake Batten arrive at the Lashkar Airport last month. The parking lot behind them is the baggage claim area … if it’s raining, someone may pitch a tent. Photo by Ayub Kharoti

Afghanistan is home to numerous ethnic groups. Up until the last few years, many were locked in long-standing conflicts with each other.

While underlying tensions still exist, the peace that is now more of a way of life than a dream of yesterday provides a framework through which Afghans can coexist.

Today the streets of Kabul reflect the spectrum of ethnicity and culture that is Afghanistan. This blend allowed Blake and me to move about the streets and markets of Kabul unnoticed. To those walking by, we were Nuristani and Panjshiri, not Americans or Europeans. 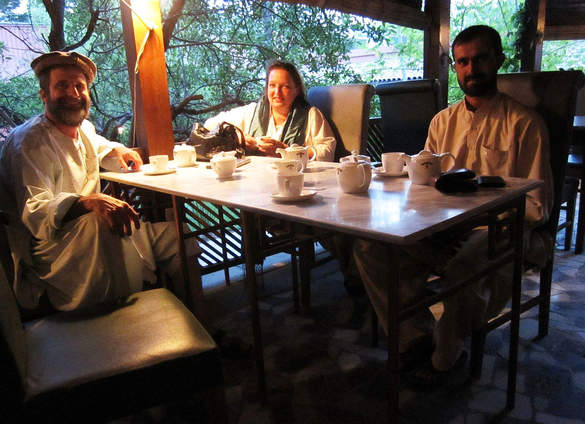 Bob Fuselier, left, and Ayub Kharoti meet with Dr. Natalie Schoon of the Agricultural Development Fund at their hotel in Kabul. Fuselier met Schoon on his plane ride into Kabul from Dubai. The hotel where he eventually stayed was a desirable hangout for employees of NGO’s and contractors, he said. Photo by Blake Batten

Our host, Ayub, is a Pashtun from Helmand Province in southwest Afghanistan. His association with the Green Village Schools’ Advanced Education Center has brought him to Kabul, where he quickly learned his way around. As night set in during our first adventure into Kabul, Ayub took us to a local restaurant for dinner. Blake, familiar with the food from his previous journeys in India, ate kabuli palau (rice with raisins, carrots, nuts served over lamb) with the appetite that comes with a man in his mid 20’s.

I, experiencing the decreased appetite that often accompanies jet lag, shared some of Ayub’s palau. Dessert was Afghan yogurt. After dinner, as we waited for Ayub to settle the bill, Blake and I noticed a picture of a man prominently displayed in the entry. When asked, Ayub explained that his name is Abdul Rashid Dostrum, the Uzbek general who fought against the Taliban and is still active in Afghan politics.

“This is an Uzbek restaurant, and he is their hero,” he explained. “Pashtu people don’t think highly of him. Many were killed by his army.” 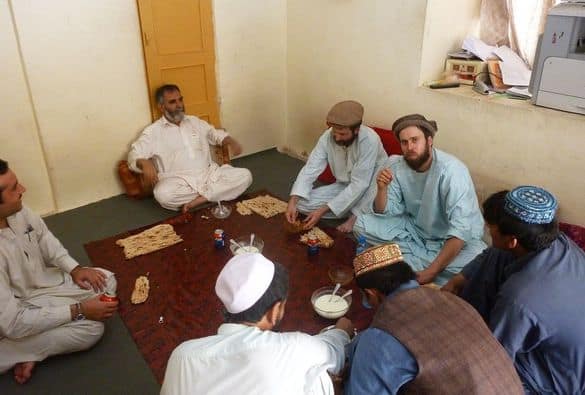 Dr. Mohammad Khan Kharoti, leaning against the door, to his right, Bob Fuselier and Blake Batten – others are teachers and staff at the AEC. Dodey, the large sheet of flat bread, is a main stay at dinners and is used to scoop food portions from platters of food served in common. Uneaten portions appear as placemats in this photo. Photo by Ayub Kharoti

Here we were, Americans guided by a Pashtun eating in an Uzbek restaurant. Our ‘invisibility cloaks’ had offered us more than protection. Although still limited by language barriers, our attire allowed us a closer look into Afghan culture. We were able to witness the difficulties that faced Afghanistan and its people and to experience some hopeful possibilities for lasting peace.

In the end, Afghans will determine their future. As Americans, our best choice is to support those who are willing to work towards a future of peace and prosperity. Ayub, a young man in his 20’s but tempered with an early wisdom that comes from a lifetime exposed to struggle, made a point during a later discussion that could just as well define America’s future. He explained many Afghans live only to put money in their pockets, for their own security and that of their families.

But that does nothing for the future of Afghanistan. His hope for his country resides heavily on the young, those seeking education and new ideas for growth and development, not just for their own good but for the good of others.

There is still hope for Afghanistan.