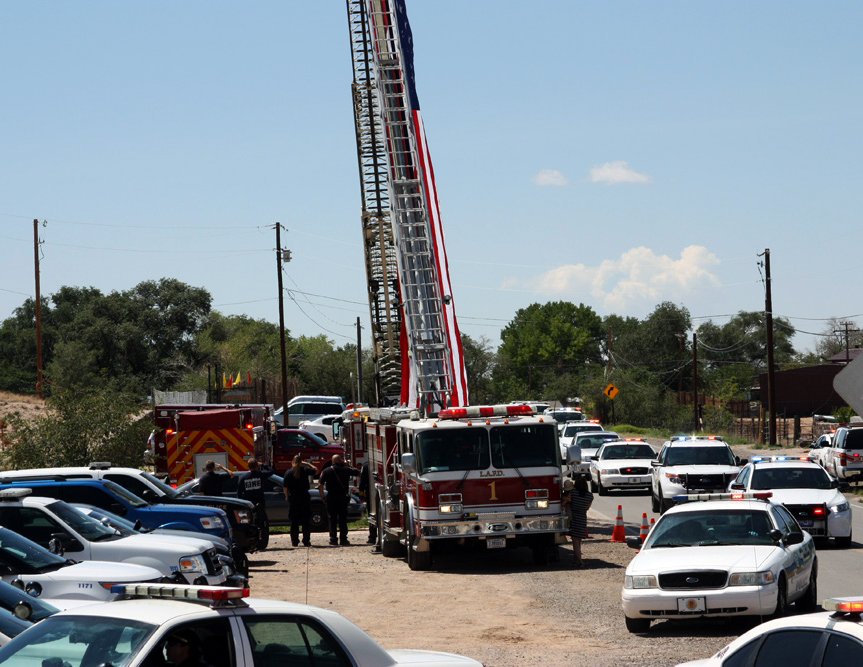 Law enforcement vehicles form a long procession to escort Cpl. Alfred Roybal’s body from the church to the cemetary today in Santa Cruz. Los Alamos Fire Department officials and firefighters honored Roybal by raising the American flag on a tall ladder at the entrance to the cemetary. Photo by Bonnie J. Gordon/ladailypost.com 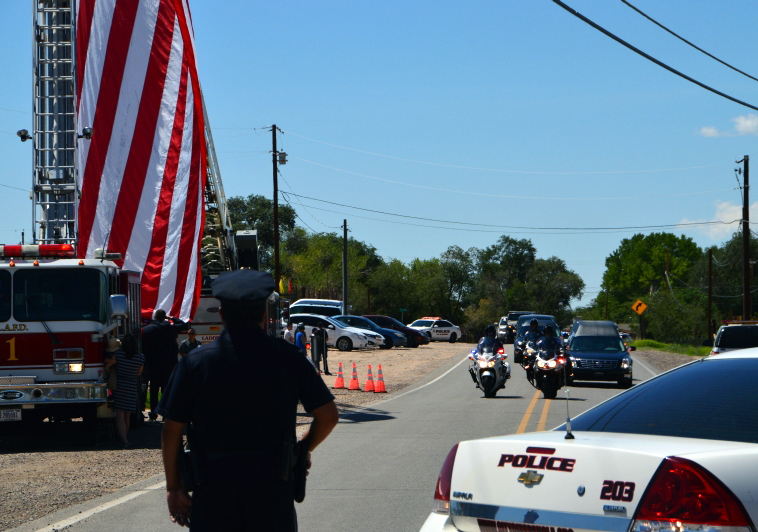 Officers on motorcycles lead the procession into Holy Cross Cemetary. Photo by Carol A. Clark/ladailypost.com

Fr. John Carney of Immaculate Heart of Mary Church in Los Alamos traveled to Santa Cruz to officiate the Mass of Christian Burial. During the graveside service at Holy Cross Catholic Cemetery, Roybal was given a 21-gun salute, bagpipes played and buglers performed taps. LAPD conducted the “Last Call” tradition for fallen officers. Police radios were tuned to a certain frequency and in the silence, a dispatcher called for Roybal by his call sign. Silence followed. Three times the dispatcher called for Roybal and three times there was no reply … Roybal had arrived on his last call … he was on end of shift forever.

Roybal, 36, leaves behind a wife and four children. He served the Los Alamos community for 11 years on the police force. During the Las Conchas Fire of 2011, Roybal did not see his family for days as he worked with fellow officers around the clock protecting the community.

“He gave so much to our department and so much to this community,” Duran said. “He will be missed more than I can say.”

LAPD opened the “Cpl. Alfred Roybal Memorial Fund” Monday at Los Alamos National Bank. Donations have reached about 60 percent of the funds needed to assist the family with funeral expenses.

“The deadline is noon Saturday for donations to be received at LANB in time to pay funeral expenses for Cpl. Roybal,” Duran said. “This is such a devastating time for the family and we don’t want them to have to worry about finances on top of everything else. Alfred was a true hero and we hope everyone who is even considering donating to help his family will do so right away.”