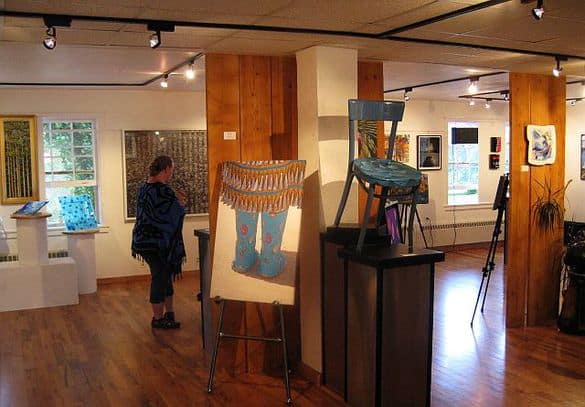 “Rhapsody in Blue” is the newest show at the Fuller Lodge Art Center. Photo by Kirsten Laskey/ladailypost.com

It’s a commonly asked question – what is there to do in Los Alamos? As it turns out – lots.

Friday, artistic endeavors will burst at the seams. It begins with the opening reception of “Rhapsody in Blue,” the newest show at the Fuller Lodge Art Center.

About 40 artists, including one participant from Canada, have revealed their interpretations of this theme.

In addition, local photographer TK Thompson pays tribute to George Gershwin’s famous work of the same title with his “Faces of Jazz” show in the Portal Gallery.

The cultural festivities continue with a concert by the Ryan Finn Quartet at 7 p.m. in Fuller Lodge.

The concert, which is sponsored by the Los Alamos Arts Council, will feature melodies of New Orleans, the Caribbean and Brazil.

Tickets cost $10 and will be sold at the door. 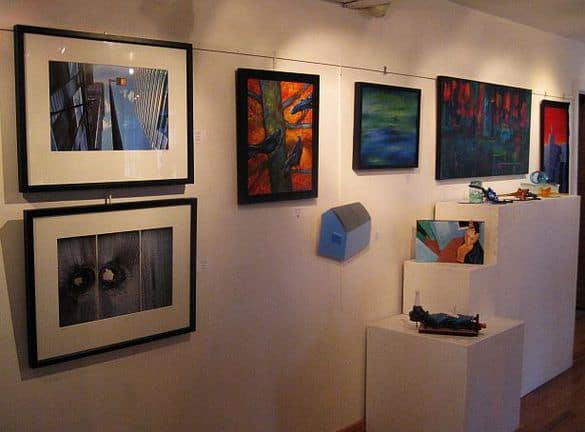 While walking through the newest exhibit at the Art Center, Director Ken Nebel pointed out the juxtaposition between Thompson’s black-and-white photographs in one area and the celebration of the color blue in the adjacent area.

Every shade of blue imaginable is on display. One of Annette Paajanen’s glass dishes has just a hint of pale blue while Jim Caffrey’s photographs feature a royal blue sky.

Turquoise-blue, periwinkle, cobalt-blue, navy-blue – this show features them all.

Nebel said it was the “hardest show we ever had to hang” because there were so many shades of blue and not every shade compliment one another.

Beside the varieties of blue, the artists’ work is extremely varied.

“We have a nice combination of abstract pieces and more realistic ones,” Nebel said.

“There’s so many different kinds of work – people are sure to find something to get into,” he added. 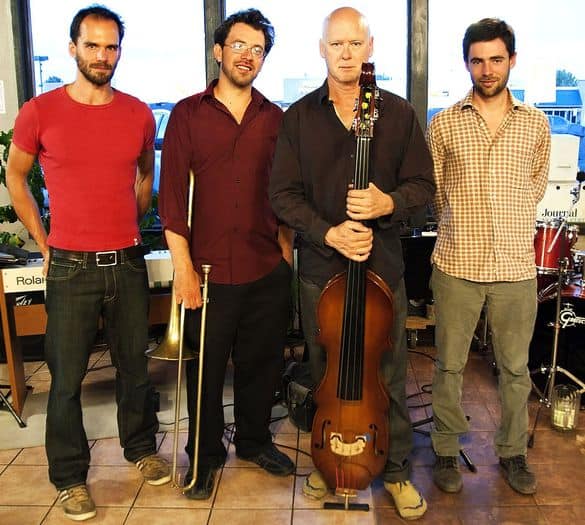 Marlane Hamilton, executive director of the Arts Council, explained the Ryan Finn Quartet concert came about because Nebel was looking for a musical element to add to the “Rhapsody in Blue” show.

Plus, it was a way for the two organizations to collaborate and participate in the Friday Night Out Los Alamos program, which the Mesa Public Library is hosting, Hamilton said.

She explained the concert “will have a little bit of New Orleans with rhythm and melodies of the Caribbean and Brazil.”

Since this a different genre of music than what the Arts Council typically presents to the community, “We’re very excited to be involved in it,” Hamilton said.

She added the Arts Council strives to “bring things to the community that offers some entertainment for all the different musical interests in the community.”

There will also be special guests and Finn’s brothers Johnny, percussionist; and William, alto sax; as well as his sister, Madeline Finn Thibodeaux, vocals and trombone.

Many of Finn’s experiences influenced his style of music.

“I studied music education at Loyola University – New Orleans from 2000-2004. While I was there I had the wonderful opportunity to see musicians performing all different types of music. The culture and heritage of New Orleans has affected the course of its musical tradition like nowhere else on earth,” he said.

“There is an incredibly broad range of music in the city, but all of it has a certain similarity and grit. Something that is hard to describe,” he said. “I try to embody this in my trombone playing. I moved to St. Lucia, an island-nation in the West Indies, in December 2004 and taught music there until December 2011. While I was there, I played with calypso bands, reggae bands and the local jazz groups.

“I performed every year for the international jazz festival, St. Lucia Jazz. I fell in love, not only with calypso, soca and reggae, but the indigenous folk music of the Lesser Antilles. It was during a visit to New Orleans in 2008, that I realized how incredibly similar the musical traditions of these two places are. Rhythmically similar but interpreted vastly different, I have recently (after arriving back in the U.S.) begun composing pieces influenced by this cross of style and culture.”

Finn’s travels outside of Los Alamos may have helped shaped his music but his time as a student at Los Alamos High School also rubbed off on his musical career.

The LAHS graduate was involved the school’s music program.

“The band director at the time, Ms. Pamela Towry, inspired my older brother, Johnny, and I to pursue music,” he said. “I realized on the marching band field in 10th grade that I wanted to pursue music and focus specifically on teaching.”

Friday’s concert may be unique to the Arts Council but it is also special to Finn since his siblings will join him on stage.

“This is the first time we are all performing together. We are all professional musicians and have this great opportunity to come together and collaborate on this project. We’re all very excited,” he said.

Finn is also excited to share his music with his hometown.

“I enjoy the Los Alamos audience immensely. They are great listeners. They have a deep appreciation for all types of music and enjoy supporting their ‘local boys’,” he said.