‘Friday Night at the Museum’ Returns with Robotics Night Aug. 23 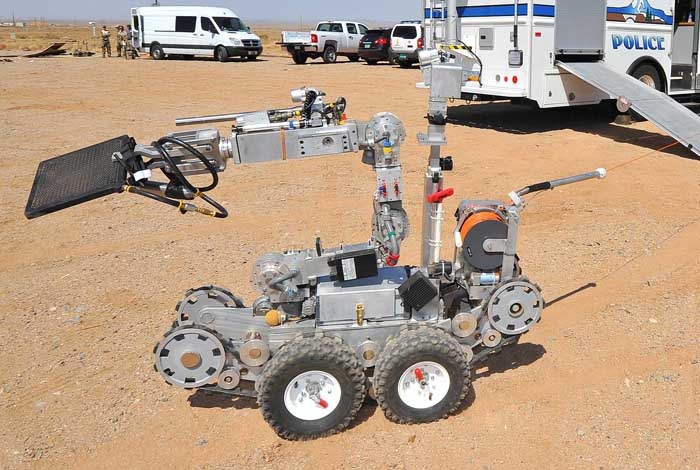 Employees and the public can see and drive a variety of different robots at Robotics Night 5-8 p.m. Friday, Aug. 23 at the Bradbury Science Museum.

Robots from the Laboratory’s Hazardous Devices Team, the FIRST Robotics Leagues, UNM, Los Alamos, the Los Alamos Police Department and other local enthusiasts will be at the museum.

Demonstrations will include the Laboratory’s robots each weighing in at more than 500 pounds and the Los Alamos Police Department’s Bomb Squad robot. UNM-LA’s robotics program also will have many of their student-built bots on display with information on their degree program offerings.

In addition, attendees can operate the robotic arm on display at the museum acting out possible real-life scenarios. The arm is similar to the kind used in hot cells and glove boxes at the Laboratory.

Also featured will be Sumo Bot battles. The Sumo robots are autonomous, battery powered and controlled by an Arduino or a similar processor. Competitors will battle to push each other out of the ring with only their sensors and programming to guide them.  A number of other Arduinos also will be on display for the evening in an Arduino Zoo.

A frisbee-throwing robot named “Bradbury” and designed by the For Inspiration and Recognition of Science and Technology (FIRST) Robotics Competition Team 4153, “Project Y,” will be at the event as well. Participants will have an opportunity to drive Bradbury through an obstacle course.

There is no admission fee for Robotics Night or any events at the Bradbury Science Museum.

For more information, go to the Bradbury Science Museum website.