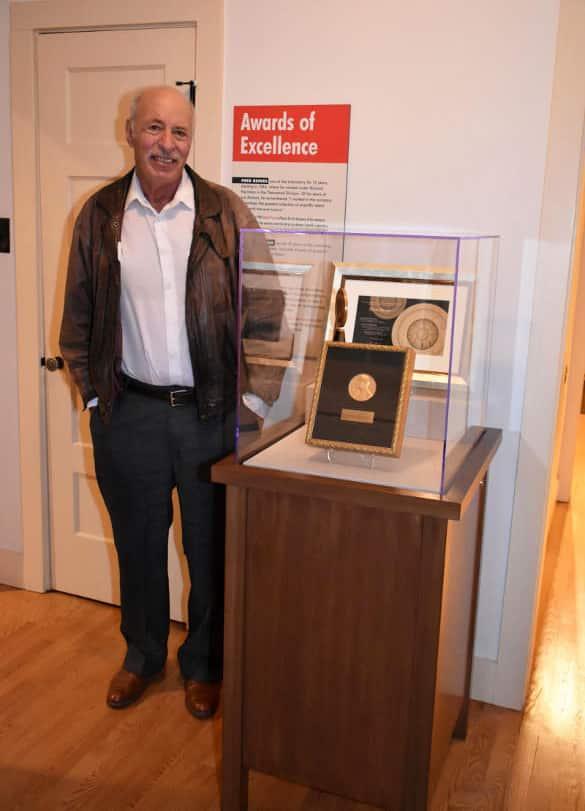 Robert Reines stands next to his father’s Nobel Prize medal in the Hans Bethe House. Photo by Todd Nickols 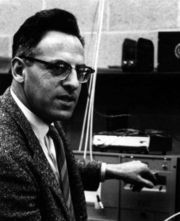 Frederick Reines/Courtesy photo
By HEATHER MCCLENAHAN
Los Alamos Historical Society
The only Nobel Prize won for work done at the laboratory in Los Alamos is justly on display in the Los Alamos History Museum’s Hans Bethe House.
The world’s top physics prize was awarded to Frederick Reines in 1995 for the discovery of the nuetrino, a subatomic particle produced by the decay of radioactive elements. They are called neutrinos because they are neutral—lacking an electric charge. As Reines himself said, nuetrinos are “the most tiny quantity of reality ever imagined by a human being.”
Sylvia and Fred Reines first came to Los Alamos in 1944 as part of the Manhattan Project. Fred worked in the Theoretical Division under Richard Feynman and later became group leader. He served as the director of Operation Greenhouse, which consisted of a number of historically significant Atomic Energy Commission experiments on Eniwetok Atoll, and he worked on the results of bomb tests at Eniwetok, Bikini, and the Nevada Test Site. The couple’s son, Robert, was born in Los Alamos in May of 1945 and daughter, Alisa, followed in 1948.
The Reineses were very involved in the community during their time in Los Alamos.
Sylvia was an early member and the first president of Hadassah, the Jewish women’s service and educational organization. Fred was active with the Los Alamos Little Theater and the Los Alamos Light Opera. His dramatic roles included the lead in Inherit the Wind and performances in Gilbert and Sullivan operettas. In his official biography on the Nobel Prize website, Reines stated that between college and graduate school he briefly considered pursing a professional singing career.
In 1956, Fred Reines and Clyde Cowan worked with reactors in Hanford, WA, and Savannah River, SC, to detect the neutrino. Cowan passed away in 1974, and Nobel Prizes are not awarded posthumously. However, Reines received the 1995 award in both of their names.
Reines left Los Alamos in 1959 to become professor and head of the Department of Physics of the (then) Case Institute of Technology in Cleveland, OH. He built a group to work on reactor neutrino physics, electron lifetime studies, and related issues. His research continued when he took his research group with him to the new University of California, Irvine, campus in 1966, where he became the founding Dean of the School of Physical Sciences, and where he remained for the rest of his distinguished career.
In 2007, the Reines family donated $100,000 to the Los Alamos Historical Society, along with Fred’s Nobel prize medal. The funds were used to improve and maintain the museum’s archives and collections, which included moving the archives from Fuller Lodge to a new, purpose-built facility at the Municipal Building.
At the time, Larry Campbell, president of the the Historical Society, said, “This substantial gift will go far in enabling the Historical Society to fulfill its mission to the community of Los Alamos and, more widely, to the community of scholars. Moreover, this gift of the Sylvia and Frederick Reines Trust is an opportunity to commemorate a great scientist of Los Alamos and the achievements that are associated with his tenure here.”
Part of commeorating those achievements is displaying Fred’s medal in the Harold Agnew Cold War galleries in the Hans Bethe House. It is part of a exhibit that discusses brilliant scientific work that has gone on in Los Alamos through the years and notes other Nobel Prize winners who have been associated with the laboratory.
Admission to the Hans Bethe House is obtained at the main entrance to the Los Alamos History Museum, next door to Fuller Lodge.
The museum is open from 9 a.m. to 5 p.m. Monday through Friday and from 10 a.m. to 4 p.m. weekends. Admission is $5 per person and is free to members of the Los Alamos Historical Society, Los Alamos County residents, active duty military, and young people 18 and under. (Even those who receive free admission need to check in at the entrance desk before visiting the Hans Bethe House.)
For more information, please visit the website at www.losalamoshistory.org. 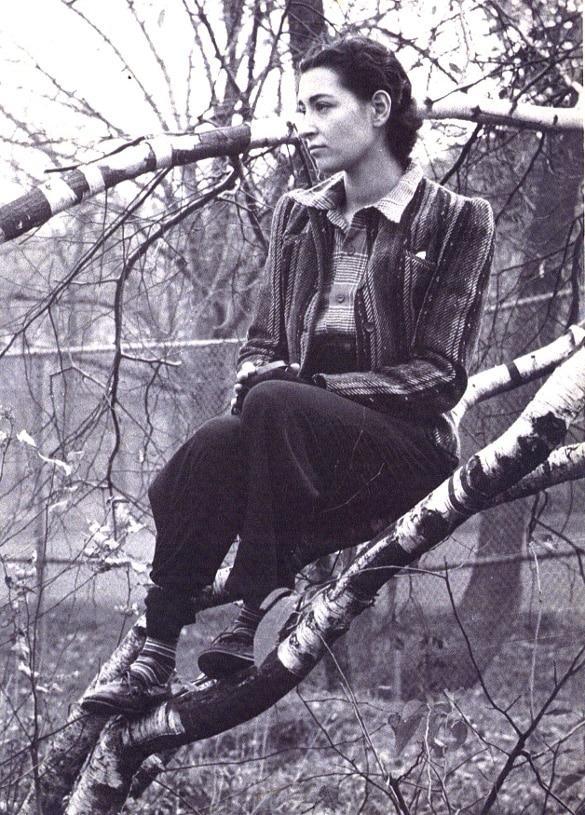