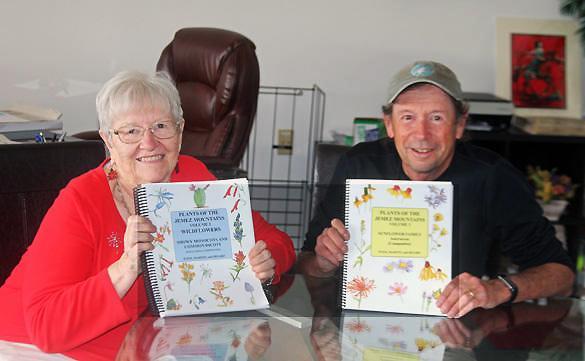 Authors Teralene Foxx and Craig Martin with the two most recent volumes of ‘Plants of the Jemez Mountains’ during a recent visit to the Los Alamos Daily Post. Photo by Bonnie J. Gordon/ladailypost.com

Los Alamos authors Teralene Foxx and Craig Martin recently published the third in their series of books titled “Plants of the Jemez Mountains”.

The third volume focuses on the Sunflower Family. This family of flowering plants is so large it gets its own book, Martin said.

This book follows “Volume 2, Flowering Plants” published in 2018 and “Plants of the Jemez Mountains, Volume 1, Trees, Shrubs, Vines, Ferns and Horsetails,” published in 2014. Volume 3 was researched and written simultaneously with Volume 2, Martin said.

With more than 1,400 plants in the Jemez Mountains, this effort has been monumental. It took five years to complete the three volumes, Martin said. The three volumes total 781 pages. It’s no wonder they initially decided to skip the grasses. But now they’re saying, maybe another volume on grasses might be in the offing.

“June is a fantastic editor,” Foxx said. “She has a really good eye. It’s been a team effort. I feel privileged to work with June and Craig.”

The series’ third contributor and guiding spirit is environmental hero, the late Dorothy Hoard. It began in 1984 when Hoard and Foxx published their guide, “Flowering Plants of the Southwestern Woodlands.” That book was revised in 1995 and Hoard and Foxx were preparing to revise it again when Hoard died in 2014. Hoard did the drawings for the book.

Foxx asked Martin to help her revise “Flowering Plants of the Southwestern Woodlands” and he wanted to do the entire Jemez Mountain area! The uniqueness of the region captured Martin’s interest and he became passionate about doing a guide to the flora of the entire area.

“Once Craig decides to focus, he really gets into it!” Foxx said.

The Jemez Mountains are so rich in flora because of the confluence of three floristic regions—the Rocky Mountains, the Great Basin and arid grasslands and deserts to the south—that creates a unique flora, Martin said.

Hoard’s contribution has continued through the three volumes of “Plants of the Jemez Mountains” through her drawings, which are included in the books. In addition to Hoard’s drawings of plants in their habitat, Foxx did close-up illustrations of the plants. Martin took the hundreds of photographs included in the books.

The three volumes are done in the same format, an 8.5 by 11 inch volume with descriptions, drawings, identification details and photographs of each plant.

“I wanted every description to be consistent,” Martin said. “We used a format to keep things in sequence.”

The list of every one of the different flora they found became the book’s index.

Foxx became interested in flora and fauna through one of her professors at the College of Idaho.

“It changed my perception of the world,” she said.

She has spent her life passing on her excitement about botany to others.

“When I’d put a flower under the microscope for kids to see, the looks on their faces were amazing,” Foxx said.

“Dorothy [Hoard] used to tell me, you’re not a plant person,” Martin said. “I took that as a challenge. She gets the credit for getting me to look at plants. (Local expert) Chick Keller pointed out the uniqueness of the Jemez Mountains. My third influence is Terry [Foxx]. She drew my attention to all the little details. Terry’s influence made me a plant person.”

Now that he’s a plant person, Martin has a specialty. It’s desert scrub, he said.

“When you see a sand dune, you can find 30 kinds of flowers growing on it,” Martin said.

“The book is not only beautiful, it’s useful,” Foxx said. “Experts and non-experts can use it and enjoy it. The goal I had with the first book is to get people outside. I still have a passion to get people outside and I hope the books contribute to that. When you get out and look at the natural world, you value it more.”

Obviously, hiking with the books is not an option, given their size. Martin suggests taking a picture of the plant and finding it in the book at home.

“Look at the pictures!” Martin said. “That’s the best use of the book. When I find something new or off the wall, I just start looking through the book!”

This is a great year to look for flowers, the authors said. Because of the rain, there are nice displays everywhere.

“Plants of the Jemez Mountains, Volumes 1, 2 and 3 are available at the Los Alamos Nature Center Gift Shop.