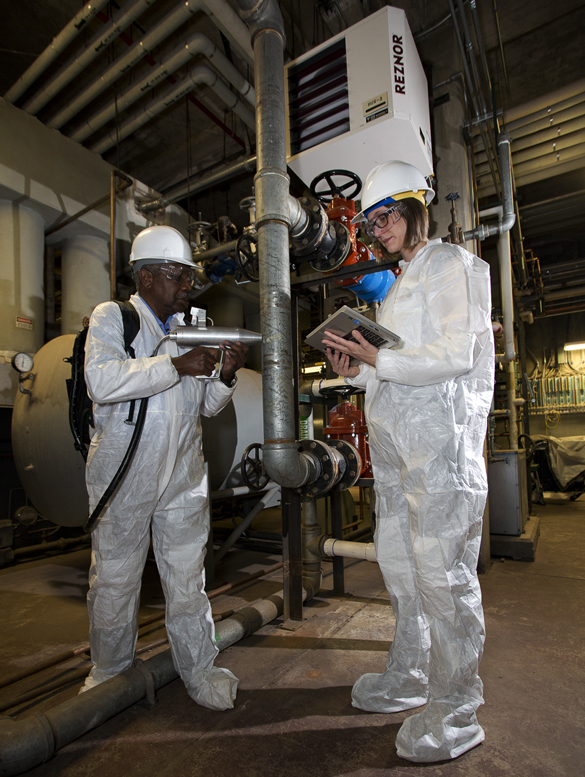 A team uses the PipeLIBS tool, which can quickly assess the condition of a pipe. Courtesy/LANL

Four Los Alamos National Laboratory projects have been selected as finalists for the 2015 R&D 100 awards, which honor the top 100 proven technological advances of the past year as determined by a panel selected by R&D Magazine.

The Los Alamos finalists are:

“The ingenuity of Los Alamos scientists and engineers is remarkable, and it is exciting to have their potential for impact recognized in this way,” said Carol Burns, the Deputy Principal Associate Director of the Science, Technology and Engineering directorate. “These finalists show the depth of scientific and technical capabilities that the Laboratory offers, with the potential to provide game-changing solutions.”

The winners will be announced at the R&D 100 Awards & Technology Conference Nov. 12-13 in Las Vegas, Nev.

LARS is a small-scale radiography device that, for the first time, can provide continuous high-speed x-ray imaging of spontaneous dynamic events, such as explosions, reaction-front propagation and material failure. To image these types of events, scientists require the use of some type of penetrating radiography, which LARS provides. Laura Smilowitz, of the Laboratory’s Physical Chemistry and Applied Spectroscopy group, and her team and collaborators at CoRELabs developed this technology.

Throughout the world, oil, gas, and petrochemical plants often use vessels and pipes to store or transport fluids. Over time, some of these vessels can corrode because of the caustic nature of the fluids inside them. PipeLIBS (Laser-Induced Breakdown Spectroscopy) is an elemental-analysis system that uses a laser beam to excite material so that it emits light at wavelengths characteristic of its chemical composition; it identifies the target elements and determines their concentration in a matter of seconds or minutes.

PipeLIBS makes it possible to inspect pipes, vessels and other components already operational in the field, as well as new pipes that are received from pipe manufacturers. PipeLIBS was developed by James Barefield, of Los Alamos’ Chemical Diagnostics and Engineering group, and his team.

Designed for high-performance computers, MDHIM is a revolutionary software tool that performs more than a billion key/value inserts per second that can be retrieved in key order.

Today, scientists analyze data visually, often turning data into images or even movies. Current simulations on high-performance computers, such as supercomputers, make visualizing data untenable because of the resources required to move, search and analyze all the data at once. MDHIM provides a solution to this complicated problem by identifying, retrieving and analyzing smaller subsets of data.

Hugh Greenberg, of the Laboratory’s System Integration group, and his team of Los Alamos researchers and John Bent of EMC developed MDHIM.

Los Alamos engineers have developed SHMTools, software that provides more than 100 advanced algorithms that can be assembled to quickly prototype and evaluate damage-detection processes. It is a virtual toolbox that can be used to detect damage in various types of structures, from aircraft and buildings to bridges and mechanical infrastructure.

Dustin Harvey, of the Laboratory’s Applied Engineering Technology and his team of R&D engineers, including Professor Michael Todd of the University of California – San Diego, developed SHMTools.

Since 1978 when it first competed, Los Alamos has won more than 130 of the prestigious R&D100 awards that celebrate the top 100 proven technological advances of the year as judged by R&D Magazine. These technologies include innovative new materials, chemistry breakthroughs, biomedical products, consumer items, testing equipment, and high-energy physics.

In the years since 1995, winning innovations have returned more than $45 million in funding to Los Alamos in the form of Cooperative Research and Development Agreements, Work for Others, User Facility Agreements and licenses. An estimated 80 patent awards have been associated with winners with many more patents pending.