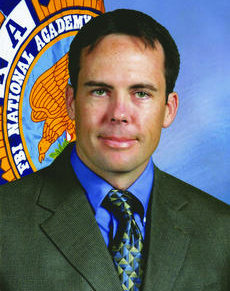 By CAROL A. CLARK
Los Alamos Daily Post
The City of Santa Fe has released the names of the three finalists for the position of Santa Fe police chief, which became vacant following the retirement of Chief Ray Rael in March.

“It would be an awesome challenge and a fantastic opportunity to continue serving the local community,” Foster told the Los Alamos Daily Post today.

Foster, 38, has been a deputy with the Santa Fe County Sheriff’s Office since July. He served with the Los Alamos County Police Department for 15 years, from July 1998 to May 2013. He rose through the ranks before being appointed acting chief in November 2012, after then Chief Wayne Torpy contracted an infection in his heart, suffered a stroke and went on medical leave.

During his time as acting chief, Foster and two other LAPD officers dealt with a detective reported to have made threats against children and adults in the community. The detective underwent a mental evaluation, sued Los Alamos County and received a settlement before moving out of state. Foster was dismissed from duty. Legal action is pending against the county in this matter.

Foster is a 2010 graduate of the FBI National Academy in Quantico, Va., a professional course of study for U.S. and international law enforcement leaders that serves to improve the administration of justice in police departments and agencies and raise law enforcement standards, knowledge and cooperation. Participants study law, behavioral science, forensic science, understanding terrorism/terrorist mindsets, leadership development, communication, and health and fitness. They also participate in a wide range of leadership and specialized training, and share ideas, techniques and experiences with other law enforcement leaders.

While at the FBI National Academy, Foster earned a “Yellow Brick’ that is awarded to those individuals able to complete a 6.1-mile grueling run through a hilly, wooded trail built by the Marines. Along the way, the participants must climb over walls, run through creeks, jump through simulated windows, scale rock faces with ropes, crawl under barbed wire in muddy water, maneuver across a cargo net and much more.

Foster and the other two finalists for police chief of Santa Fe were selected by a Police Chief Citizen Screening Committee that includes Matt Martinez of the local Police Officer’s Association and David Garcia, a civil rights attorney.

Foster said he has been notified that interviews will take place next week.