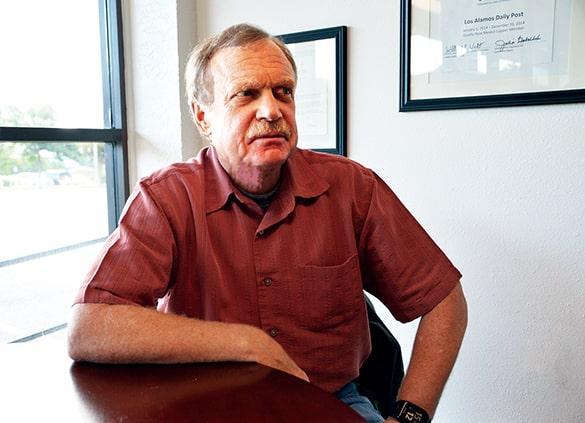 “It’s sort of a magical thing to come back two years later and see some of the things we talked about and envisioned have now come to fruition,” Wismer said. “One of the things that has really blossomed during my time on council and since is the Daily Post … a town like this is data driven and you’ve created a new information source that is fast and furious … just the way we like it.”

Wismer explained that his last term on council began in 2008 and the struggle at that time was how to spend discretionary funds for the betterment of the community.

“We all wanted to kick it up a notch and make Los Alamos a step better than it was,” he said. “As we started down that path we didn’t know where we would end up – we didn’t know if infrastructure needs would be met, or recreation needs – but the community did great, so we turned it over and under the leadership of Harry Burgess and his staff they did it.”

Wismer commended the Los Alamos Nature Center, calling it world class. When he looks at Ashley Pond Park today, Wismer said he remembers how he and his fellow councilors worried over the proposed changes.

“Just look at it now … it is the center of gravity for the community … yeah that was worth it,” he said. “Then I drive through White Rock and the most well-designed portion of N.M. 4 is right there. And I see the visitor center and all the Bandelier tourists it all works right … from the idea to the design. The senior center is well developed and designed and services the seniors exactly as we had hoped.”

Wismer added that he is glad to see that A19 is being developed and he also praised the golf course community building.

“This is another testament to good design and a project completed on time and within budget,” he said. “The magic is we took ideas and turned them into brick and mortar for the community … that’s what makes me smile today.”

The council had its challenges because there was an element of people at that time who thought the County should hold that money back for a rainy day fund, he said.

“Some residents banded together to try to stop or put the Capital Improvement Projects to a citizen vote, so in an effort to keep the wheels of government turning and address the concerns of those who felt their voices weren’t heard, we established a Charter Review Committee to review our charter and look for areas in need of improvement,” Wismer said. “We may have had our disagreements on council but we all kept the good of the community in the forefront of our mind. So to find that balance, the Charter Review Committee under the leadership of John Hopkins, were able to create an environment where the community felt comfortable in communicating their concerns with the wat the Charter was written. So what John made sure was that no stone was left unturned from should we have a mayor to should we drop home rule and systematically analyzed what would be best.”

After the initial clean up of the language in the charter, the committee prioritized making substantial improvements in the area of initiative, referendum and recall, he said. The previous charter was inadequate in its methods for citizen based initiative or citizen based referendum and were really unclear on how to recall a councilor if that ever needed to happen.

“When John Hopkins and the Charter Review Committee brought it to our attention that these three areas were deficient, that was an eye opener,” Wismer said. “So, they offered corrections to the initiative and referendum that made sense and they clearly articulated the need to have a legal method for recall that would withstand scrutiny. The recommendation was to defer to the State Constitution, which has outlined a recall process that has withstood the test of time and set a higher bar for recall – just as it should be.”

The salient point this made to us at this juncture was that the recall process should have enough legal deficiency to discourage people from recalling elected officials who have done their due diligence and made a vote on an issue that doesn’t suit some voter’s philosophy, Wismer said. So, the bar for recall or removing someone from elected office should be as stated in the constitution either for misfeasance or malfeasance.

“Further discussion about whether an elected official’s actions constitute either misfeasance or malfeasance should be in the hands of a judge because  this is a legal determination,” Wismer said. “So, we put all three of the articles to a vote of the people and all three passed … and I saw it happen and we put it in the Charter.

“Fast forward a few years and I was able to see again that vision and an idea and a concept come to fruition. I watched two of my former colleagues on council go through the potential for a recall and from what I could gather for the proceedings, the recall effort was based on the fact that the complainant didn’t like how the councilors voted. The two councilors I’m referring to are David Izraelevitz and Rick Reiss and the reason I mention them is because they were on the same gang of seven I was on.”

“I know them both to be good and honorable men who carefully analyze each issue presented to council and made the most appropriate vote based on their review and analysis,” Wismer said. “I sat in on the recent court proceeding for their recall and had an opportunity to see why recall was put on the hands of a judge. I listened as the judge carefully reviewed each of 32 complaints by this one citizen and balanced those complaints against misfeasance and malfeasance standards.

“In the end, the judge ruled none of the complaints met the criteria for misfeasance or malfeasance in office. So, despite the anguish and expense of having to go through a formal court proceeding, I hope for the good of the community that quality people like David Izraelevitz and Rick Reiss will not shy away from public service.”