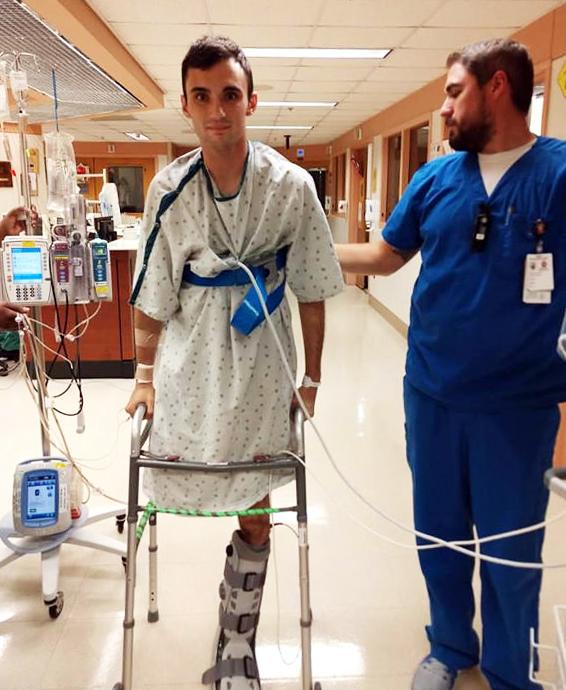 Former Chamisa student and now soldier in the U.S. Army Ezra Maes recovers in a Texas hospital after losing a leg in September. Courtesy photo 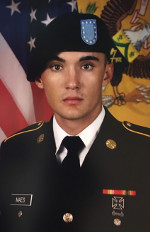 Ezra Maes at his Army bootcamp graduation. Courtesy photo
By BERNADETTE LAURITZEN
Los Alamos
Ezra Maes was a Chamisa Cheetah, a Pack 20 Cub Scout and member of the local Youth Activity Center, before he was a member of the U.S. Army.
Recently injured overseas, Maes spoke about his experiences both as a young boy and now military man serving his country. Here we start with the Chamisa student on the playground.
“My favorite Chamisa memory was having snowball fights whenever the teacher watching over recess wasn’t paying attention, because we weren’t supposed to,” Maes said.
He moved with his family and graduated from Santa Fe High School in 2016 and enlisted that August in the U.S. Army. His training included a basic training phase and job training phase conducted on the same post.
“So, for nearly four months I was in training on Fort Benning, Ga., … day in and day out we had to be soldiers,” Maes said. “After that I was stationed at Fort Hood, Texas where I conducted training exercises with my troop until my deployment to Poland.”
While on a training mission, Maes and two crew members were involved in a tank accident. All three crew mates were severely injured and Maes was forced to sever his own leg to survive. The team worked together to survive the accident and alert rescue personnel for aide. The trio was hospitalized overseas and transported together to a Texas military hospital, where Maes remains a patient.
Maes suffered the loss of the leg, a fracture to the other leg, he fractured his pelvis in five places and additionally injured his arm. Additional information about the accident was written in a September issues of The Stars and Stripes, followed by an online story in October by KOB television.
The local community has demonstrated love and support for Maes and opportunities to do so continue. A box called A Million Thanks is on display at the Betty Ehart Senior Center during business hours. Holiday cards, letters, postage and gift cards are being accepted on an ongoing basis. Letters also are being sent to eight other soldiers serving throughout the nation and world.
Maes referenced the support from friends, family, his former unit, doctors, nurses and the outpouring of love from the Los Alamos and White Rock communities. That love and support includes several mailings of writings and drawings from children and adults since September. The Church of Christ, United Church of Los Alamos and Bethlehem Lutheran Church have sent letters, candy, a handmade prayer quilt for Maes and prayer shawls for his mother, grandmother and two crew members.
“I feel love and compassion in a way I’ve never quite felt and it’s all thanks to them,” Maes said. “I have a new outlook on life and I’m so incredibly thankful for the chance to still be here let alone have so many outstanding people help me along the way.”
A GoFundMe page has been set up and funds will continue to help family travel to Texas and the needs of Maes throughout the healing process. Additional details about the accident are available on the GoFundMe site. To learn of additional ways to help, contact Champions of Youth Ambitions (C’YA) at cya.org@att.net or 505.695.9139.
If Go Fund Me isn’t your preference, consider donations to the Fisher House, whose motto is, “Because a family’s love is good medicine.” They allow families to stay at no charge when military members are hospitalized after an injury or illness. Learn more here. 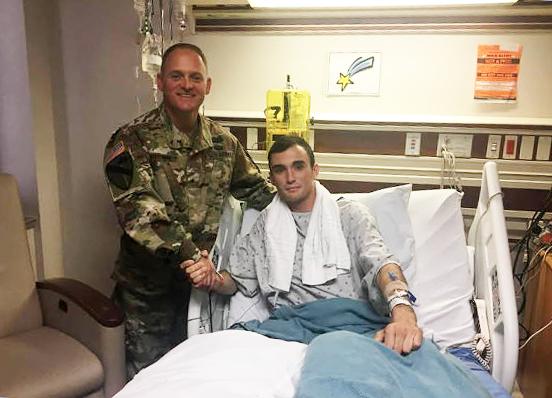 Ezra Maes in his hospital room in Texas is visited by a four-star general. Courtesy photo 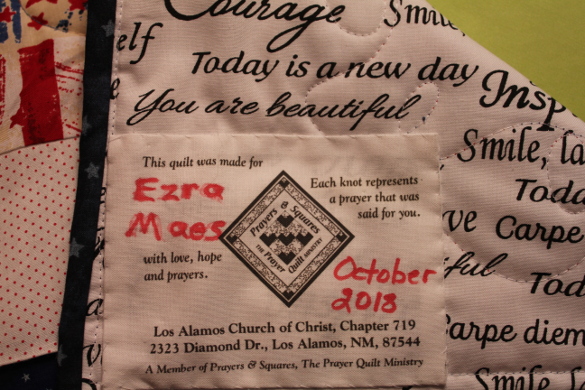