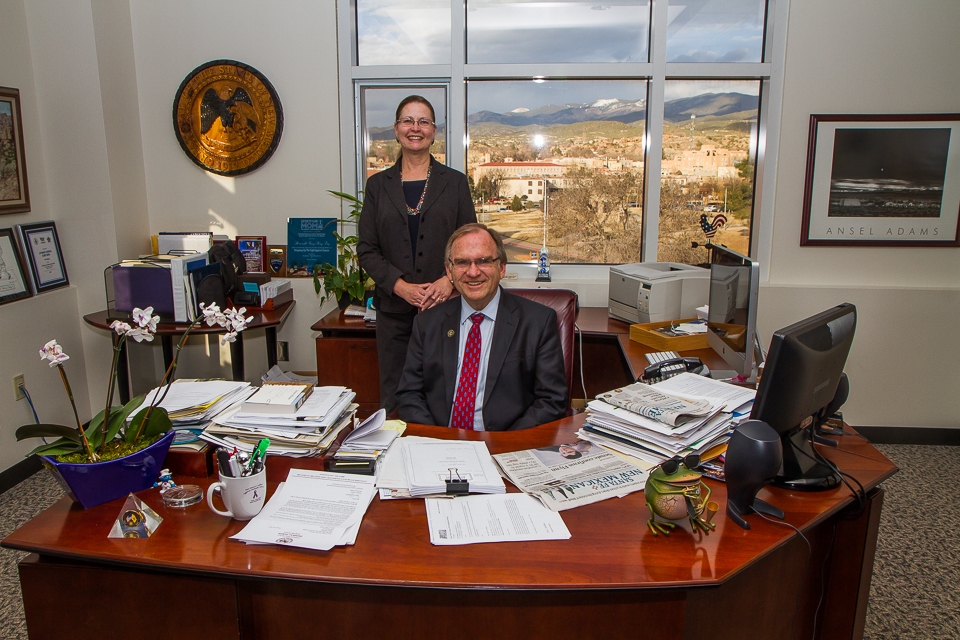 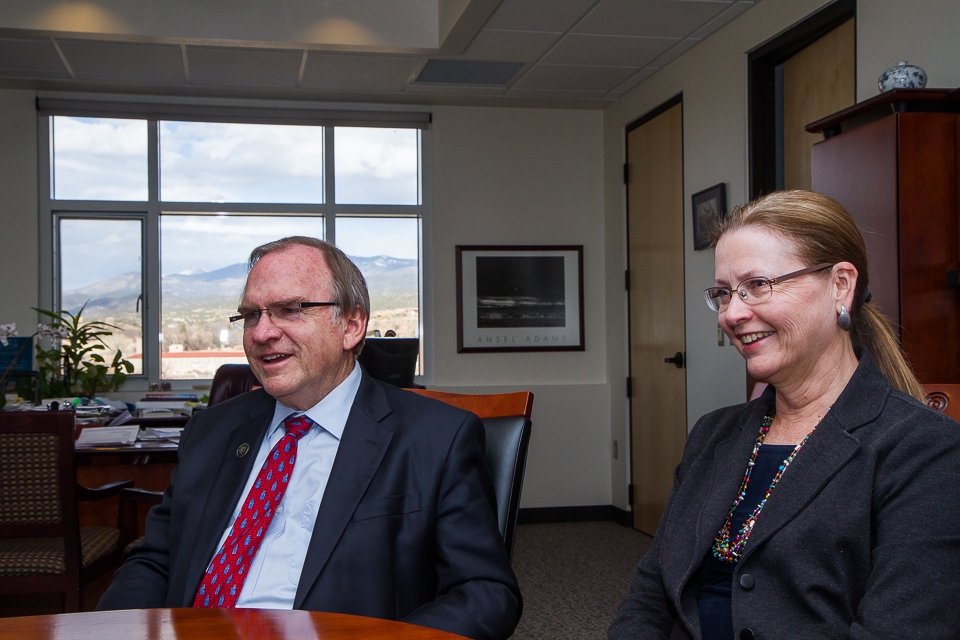 SANTA FE—A mutual interest in chemistry sparked a marriage that has spanned more than three decades. Gary King and Yolanda Jones met, became best friends, fell in love, married and together have traveled the globe.

“Yolanda was one of two campaign workers recruited to work for my dad’s campaign,” King said during an interview with the couple in his Santa Fe office. “She kept data bases on 3 x 5 cards and came to my dad’s campaign headquarters on San Mateo in Albuquerque to pick up more cards … she was all dressed up.”

King happened to be wearing his Periodic Table of the Elements bright orange t-shirt that day, which drew her to speak to him, Jones said.  He was into organic chemistry and she was partial to physical chemistry.

“We became friends during the campaign but didn’t date,” she said. “I went back to school and we kept in touch.”

King made his move when Jones needed some NF3 to perform compounds. She had N2F4, which he initially said he needed before admitting he used it as an excuse to speak with her. 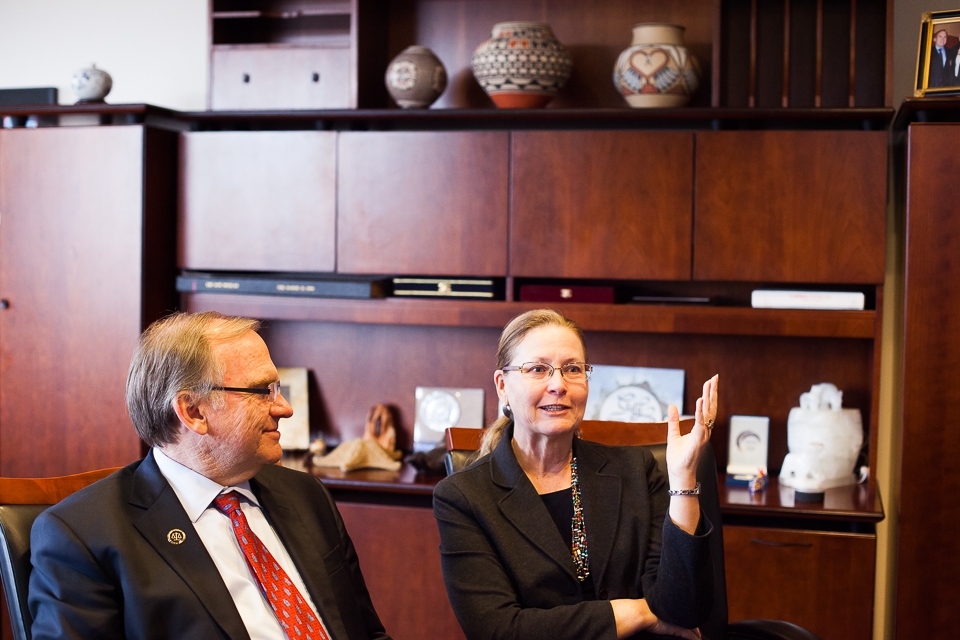 Attorney General Gary King and his wife Yolanda Jones recall the details of how they first met as college students. Photo by Salvador Zapien/ladailypost.com

King went on to earn his PhD in chemistry and intended to enroll in law school at UMN. Jones was working on lasers and her research director offered him an internship in spectroscopy working on some interesting compounds, he said, so he decided to stay. Jones was writing her dissertation and King played sax.
“We had formed the New Mexico Science and Engineering Research Quartet,” he said.

The couple married in 1987 and more than 1,000 guests attended their wedding.  The King’s have gone on to serve in important careers. 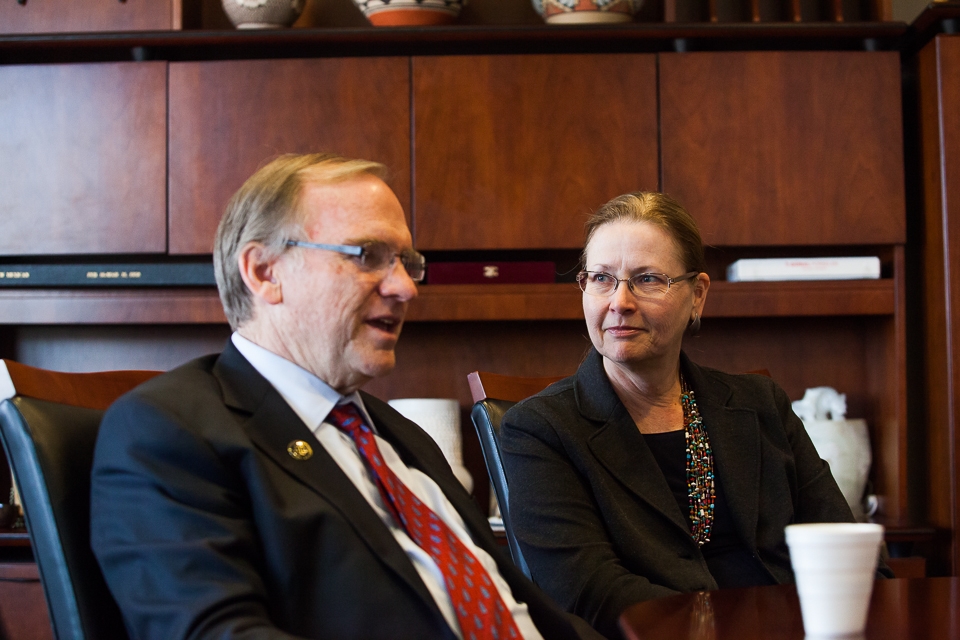 Attorney General Gary King and his wife Yolanda Jones reminisce about their early years together. Photo by Salvador Zapien/ladailypost.com
Jones went on to earn her PhD. in 1981 in chemical laser kinetics and spent 32 years in the U.S. Air Force working in research, management of research and development programs, resource management and program planning. She holds a patent in beam sensing techniques and has numerous presentations and publications in directed energy and space technologies. She was the director of Engineering & Technical Management at the Air Force Nuclear Weapons Center at Kirtland AFB.
She was the head of space based sensing and satellite protection technologies at the Space Vehicles Directorate of the US Air Force Research Laboratory for three years before moving to the AFNWC. Jones also served as chair for the NATO RTO Sensors and Electronics Technology Panel. In that capacity, Jones had to travel twice a year to meetings across the globe and often was the only woman at the events. King often accompanied his wife to fulfill the social aspect at the meetings. He was typically the only male spouse. The couple traveled to countries such as Slovenia, Romania, Poland, France, Taiwan, Italy the Netherlands and the Czech Republic.

Jones also served at the Air Force Office of Scientific Research in Washington, D.C. as director of the International Office. In 1996, she was selected by the USAF and completed a LEGIS Fellowship with Congress. Previously, she was responsible for management of all Ballistic Missile Defense Organization technology programs and oversight of all Air Force Science and Technology programs for the Phillips Laboratory Commander and AFSTC Commander. She also was at the AF Weapons Laboratory in several technical management positions and served on a research assignment at the Ecole Polytechnique in Palaiseau, France.

She retired last year but continues to serve on the Board of the Network for Women in Science & Engineering to encourage young girls to enter careers in science, engineering and math. 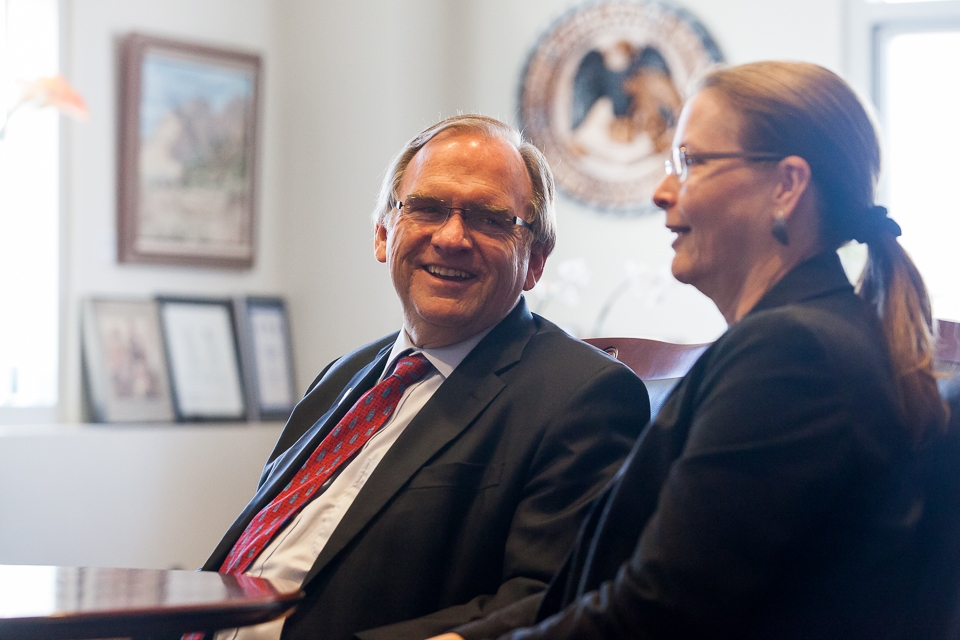 Attorney General Gary King and his wife Yolanda Jones joke about their initial meeting more than 30 years ago. Photo by Salvador Zapien/ladailypost.com

King now serves as New Mexico Attorney General. He is the only AG in the nation who also is a scientist with a PhD. in organic chemistry. King maintained a private practice as an attorney and served as a state legislator before being elected Attorney General in 2006.

King went on to attend law school at the University of New Mexico, where he received his J.D. In 1984, he formed the law firm of King and Stanley in Moriarty, where he carried out the general practice of law. In 1990, he assumed the position of Corporate General Counsel and Senior Environmental Scientist with Advanced Sciences, Inc., an environmental consulting firm.

He also served 12 years in the New Mexico State Legislature, 10 of which he chaired the Consumer and Public Affairs Committee. In 1998, King became the Policy Advisor to the Assistant Secretary for Environmental Management at the U.S. Department of Energy (DOE) in Washington, D.C. Within a year, he became the Department’s Director of the Office of Worker and Community Transition. While at the DOE, he developed and implemented a program fostering cooperation between federal, state, local and Native American governments to enhance cleanup activities. 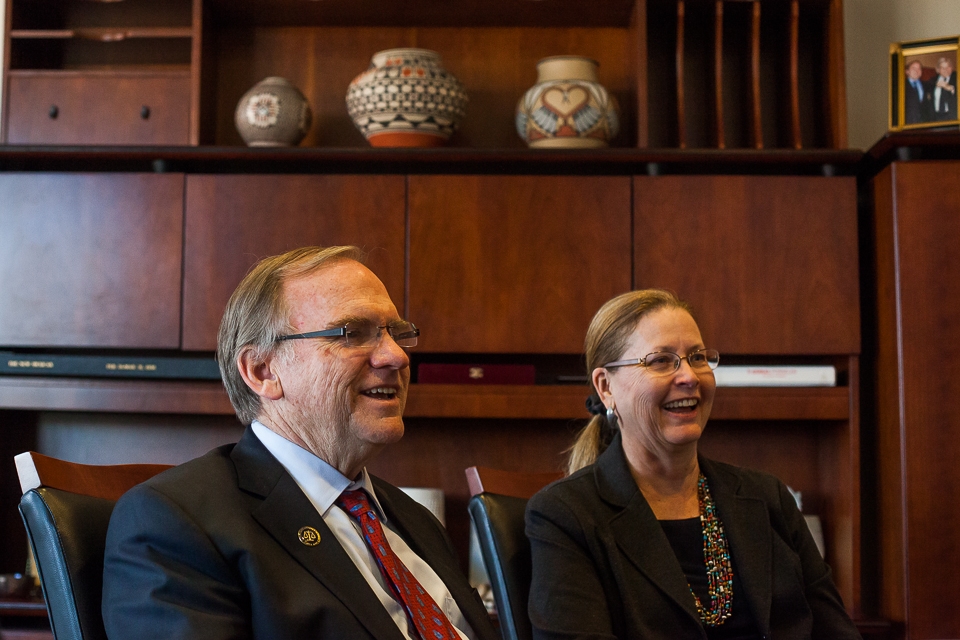 King also has been a long-time active participant in his local community, giving his time and expertise to many statewide positions. He has served as president of his Rotary Club and chair of the Manzano District of the Boy Scouts of America.

King and his wife are currently campaigning for King’s bid for governor of New Mexico.