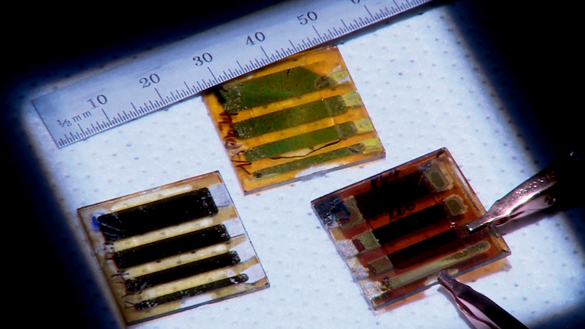 Three types of large-area solar cells made out of two-dimensional perovskites. At left, a room-temperature cast film; upper middle is a sample with the problematic band gap, and at right is the hot-cast sample with the best energy performance.  Image courtesy Los Alamos National Laboratory. Courtesy/LANL

In a step that could bring perovskite crystals closer to use in the burgeoning solar power industry, researchers from Los Alamos National Laboratory, Northwestern University and Rice University have tweaked their crystal production method and developed a new type of two-dimensional layered perovskite with outstanding stability and more than triple the material’s previous power conversion efficiency.

“Crystal orientation has been a puzzle for more than two decades, and this is the first time we’ve been able to flip the crystal in the actual casting process,” said Hsinhan Tsai, a Rice graduate student at Los Alamos working with senior researcher Aditya Mohite and lead coauthor of a study due out this week in the journal Nature. “This is our breakthrough, using our spin-casting technique to create layered crystals whose electrons flow vertically down the material without being blocked, midlayer, by organic cations.”

This research is part of Los Alamos’ mission, which includes conducting multidisciplinary research to strengthen the security of energy for the nation. That work includes exploring alternative energy sources.

The two-dimensional material itself was initially created at Northwestern, where Mercouri G. Kanatzidis, the Charles E. and Emma H. Morrison Professor of Chemistry, and Dr. Costas Stoumpos had begun exploring an interesting 2-D material that orients its layers perpendicular to the substrate. “The 2-D perovskite opens up a new dimension in perovskite research,” said Kanatzidis. “It opens new horizons for next-generation stable solar cell devices and new opto-electronic devices such as light-emitting diodes, lasers and sensors.”

“This is a synergy, a very strong synergy between our institutions, the materials design team at Northwestern that designed and prepared high-quality samples of the materials and showed that they are promising, and the Los Alamos team’s excellent skills in making solar cells and optimizing them to high performance,” said Kanatzidis.

A Los Alamos co-author on the paper, Wanyi Nie, noted that “the new 2-D perovskite is both more efficient and more stable, both under constant lighting and in exposure to the air, than the existing 3-D organic-inorganic crystals.”

The challenge has been to find something that works better than 3-D perovskites, which have remarkable photophysical properties and power conversion efficiencies better than 20 percent, but are still plagued by poor performance in stress tests of light, humidity and heat.

Previous work by the Los Alamos team had provided insights into 3-D perovskite efficiency recovery, given a little timeout in a dark space, but by shifting to the more resilient 2-D approach, the team has had even better results.

The 2-D crystals previously studied by the Northwestern team lost power when the organic cations hit the sandwiched gap between the layers, knocking the cells down to a 4.73 percent conversion efficiency due to the out-of-plane alignment of the crystals. But applying the hot casting technique to create the more streamlined, vertically aligned 2-D material seems to have eliminated that gap. Currently the 2-D material has achieved 12 percent efficiency.

“We seek to produce single-crystalline thin-films that will not only be relevant for photovoltaics but also for high efficiency light emitting applications, allowing us to compete with current technologies,” said Mohite, principal investigator on the project.

Funding: The work was funded by the Los Alamos Laboratory-Directed Research and Development (LDRD) program.