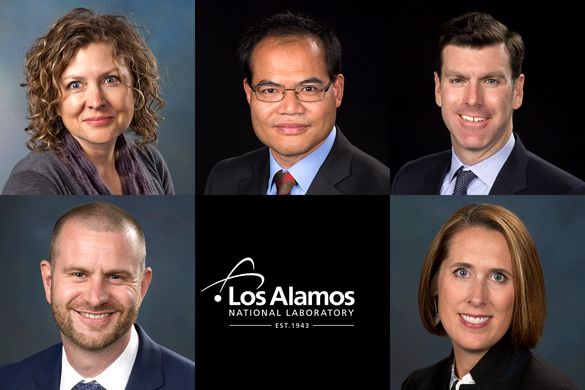 “These scientists are being recognized for mission-relevant research and leadership that maintain the Lab’s longstanding reputation for innovative scientific discoveries,” said Chuck Farrar, the Engineering Institute Leader at the Laboratory’s National Security Education Center and the coordinator of the Fellows Organization. “I congratulate all of them on their achievements.”

The Fellows Prize for science or engineering commends individuals for outstanding research performed at the Laboratory that was published within the last 10 years and that has had a significant impact on its discipline or program. The Fellows Prize for leadership in science or engineering commends individuals for outstanding scientific and engineering leadership at the Laboratory and recognizes the value of such leadership that stimulates the interest of talented young staff members in the development of new technology.

Marc Janoschek, of Condensed Matter and Magnet Science, led the first experiment of its type with a multi-disciplinary team at the Spallation Neutron Source that utilized plutonium-242; many have said this is the most significant measurement on plutonium in a generation. His research focuses on the use of elastic and inelastic neutron scattering to elucidate complex behavior in materials exhibiting emergent phenomena. This important work supports the programmatic efforts of the Lab and helps Los Alamos maintain its position as the recognized leader in actinide science and correlated electron materials research.

Jennifer Martinez, of the Center for Integrated Nanotechnologies, is among the best-known nano-cluster scientists in the world. Her research focuses on the development of biosensors for threat reduction, tuberculosis and breast cancer and the synthesis and characterization of optical and biologically reactive polymers. This research has demonstrated the ability to control the synthesis and tailoring of the photophysical properties of small metal nano-clusters, which represents an emerging and interesting class of materials that can be used in to create new biological detectors that overcome many difficulties of earlier approaches.

Jian-Xin Zhu, of Physics of Condensed Matter and Complex Systems, broadly impacted actinide science and nanotechnology work at the Lab by upending the conventional picture of when the transition to strong correlations occurs in delta and alpha plutonium. His research focuses on the development and application of quantum, many-body, first-principles electronic structure theory to strongly correlated electronic materials.  Zhu’s work on plutonium is an achievement in computational and theoretical physics that represents a dramatic leap forward; it has attracted a great deal of attention in the field of correlated electron systems.

Dana Dattelbaum, of Explosives Science and Shock Physics, led teams in pioneering new techniques and approaches to problems that have previously defied solution, including leadership of collaborations that made the first-ever measurements of reaction rate variation as a function of shock amplitude. She has mentored 13 students and 14 postdocs that have gone on to be highly successful in research and management positions in government and industry; her influence has been significant. Dattelbaum has 136 peer-reviewed publications, been named an APS Fellow and received 10 NNSA Defense Program Awards of Excellence.

Christopher Stanek, of Materials Science in Radiation and Dynamics Extremes, maintained and enhanced the Lab’s involvement in the Consortium for the Advanced Simulation of Light Water Reactors (CASL), and succeeded in turning the Fuels, Materials and Chemistry focus area of CASL into a strong performer. Secretary of Energy Ernest Moniz said CASL is the most successful of the energy innovation hubs; this success is due to his efforts. Stanek is now the national technical director of Nuclear Energy’s Nuclear Energy Advanced Modeling and Simulation (NEAMS). His work has been a boost for the Lab’s reputation.