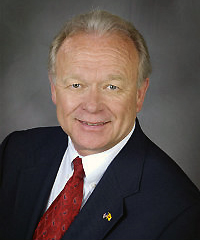 Photo: Ron Curry
WASHINGTON – U.S. Sen. Tom Udall, D-N.M., issued the following statement on the appointment of Ron Curry to be the Environmental Protection Agency‘s Administrator for the South Central Region 6, which includes the State of New Mexico.
“For more than three decades, the State of New Mexico has entrusted Ron to be a custodian of our natural resources,” Udall said. “Today, I applaud the Environmental Protection Agency for entrusting him with the responsibilities and challenges that come with leading this important regional office. Ron brings an incredible amount of experience in local, state and tribal governments as well as the private sector. He’s a pragmatic thinker who recognizes that environmental and economic prosperity go hand in hand, and I can think of no one more qualified for this position.”
Curry, a Hobbs native, will be the first New Mexican to lead the region’s office, which is headquartered in Dallas, Texas.
As Administrator for the EPA’s South Central Region (Region 6), Curry will oversee the agency’s work in five states, including New Mexico, Arkansas, Louisiana, Oklahoma and Texas, as well as 66 tribes.
Biographical information provided by the Environmental Protection Agency (EPA):
Ron Curry has more than 36 years of management experience in local, state, and federal government, as well as the private sector. He served as Cabinet Secretary of the New Mexico Environment Department from January 2003 thru December 2010 in the administration of New Mexico Gov. Bill Richardson.
Menu
LOS ALAMOS