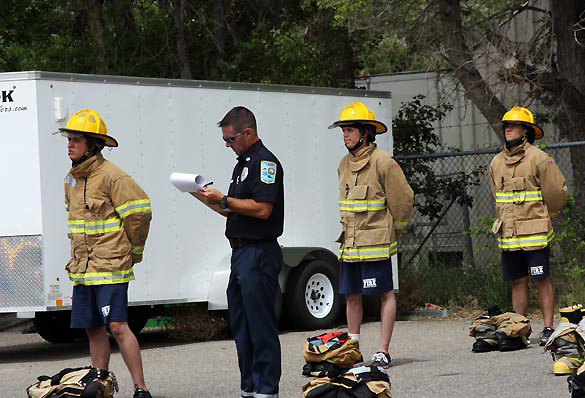 An LAFD trainer jots down his observations. Photo by Bonnie J. Gordon/ladailypost.com 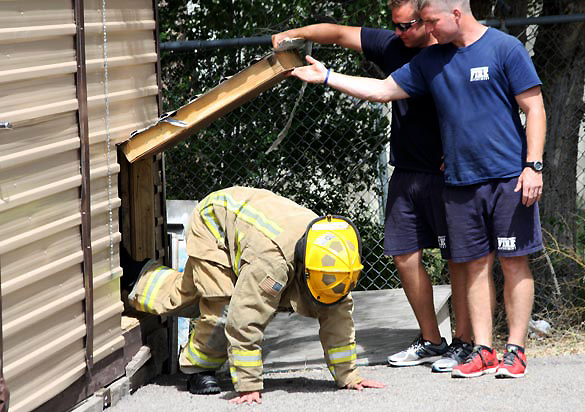 Los Alamos Fire Department (LAFD) is a three-time internationally accredited agency – a fact that draws interest from potential firefighters across the nation.

Twenty such individuals have applied to join LAFD and spent 7 a.m. to 5 p.m. Saturday immersed in a pre-academy to better understand what they will be getting themselves into if hired. It gives them the opportunity to ask themselves if they have the drive, dedication and physical ability for success.

“We started the pre-academy last year to give the applicants every chance to succeed as firefighters,” Fire Chief Troy Hughes said at the LAFD Training Center on DP Road where the pre-academy was held. “In the past, about 50 percent of the applicants we hired would quit their jobs and in some instances relocate here only to realize this is not for them and they would drop out of the academy before completion.”

Hughes explained that the typical academy graduation rate was about 50 percent. The average jumped to 90 percent for the recruits who attended last year’s pre-academy.

“At the end of the pre-academy, we invite the families to join us and we talk about the sacrifices they will need to make during the 22-week fire academy,” Hughes said.

The families learn that the days at the Academy are long and difficult andtheir recruit won’t be home to do many of the things he or she typically does because the academy will take all of their focus from August to February, he said.

Saturday’s pre-academy class was comprised of men ages 20 to 43 from across New Mexico and included an applicant from Nebraska and another from Idaho. There were several from Los Alamos as well.

“I’m here because I wanted to give something back to my community,” said 26-year-old Ryan McNiff who was born in Los Alamos. “This is an opportunity to be an example … to work with a fire department that has the highest of standards and to be a part of something bigger than myself.”

Capt. Jeff Wetteland said that Saturday’s pre-academy is designed to give potential firefighters a snapshot of the real academy.

“Our goal is to maintain our status as a premiere fire department in New Mexico,” “At the academy, we put them in as much or more pressure than they’ll ever see on an emergency call.”

Saturday’s 20 applicants took turns climbing a 105-foot ladder, crawling through a maze in a pitch black confined space among many other exercises. They also performed sit ups, pushups, pull ups and ran three miles to get a baseline measurement of their current abilities, Hughes said, and they were given a written test.

“We do everything we can to prepare them to be as good as they can possibly be,” Grider said. “We have a training officer for each team of five and at the end of the day they provide guidance to the applicants, sharing what they observed as strengths and where they need to improve.”

Recruits come out of the academy with 23 college credits for the Fire Science program at UNM-LA, Grider said. If they are in the military, they can utilize the GI Bill to help with their education, housing and other expenses.

LAFD has 12 slots to fill for this year’s academy, which gives those who make the cut from Saturday’s pre-academy a 60-day window to get up to speed before entering the state fire academy, he said.

LAFD was organized under the Manhattan Project in April of 1943. At that time, it consisted of 7 civilian firefighters and 25 volunteer firefighters. In September of 1943, the firefighter functions were taken over by the military. The Fire Department was governed by the US Atomic Energy Commission and the US Department of Energy (DOE) until the Incorporated County of Los Alamos took it over in September of 1989.

LAFD’s mission:“We, the Los Alamos County Fire Department, are committed to the safety and welfare of everyone in our diverse community. We promise exceptional services in the preservation of life, the environment, and property.” 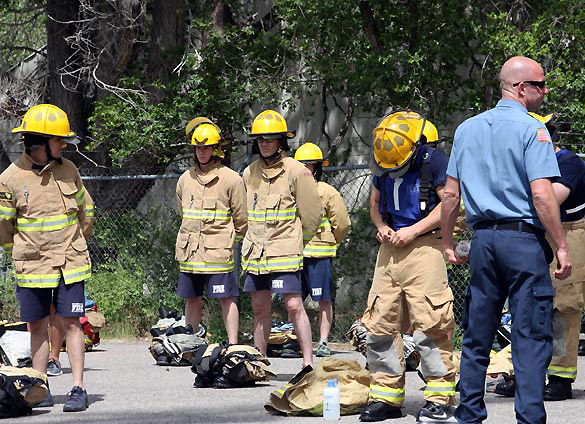 Capt. Jeff Wetteland, right, directs pre-academy participants to put on their long pants and prepare to crawl in a confined space. Photo by Bonnie J. Gordon/ladailypost.com 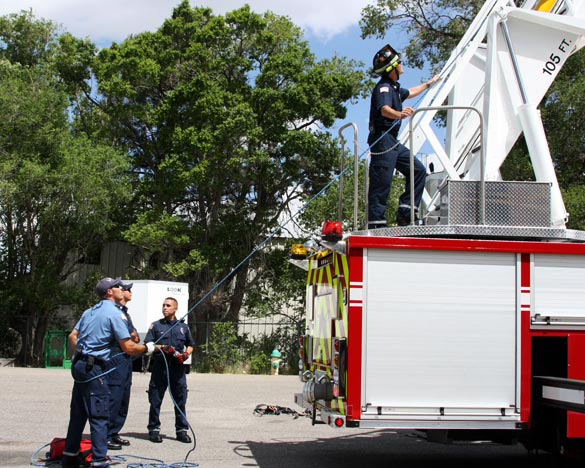 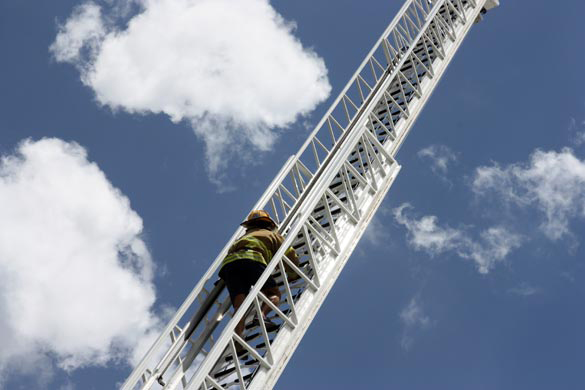 Climbing this 105-foot ladder helps determine whether a participant has a fear of heights. Photo by Bonnie J. Gordon/ladailypost.com 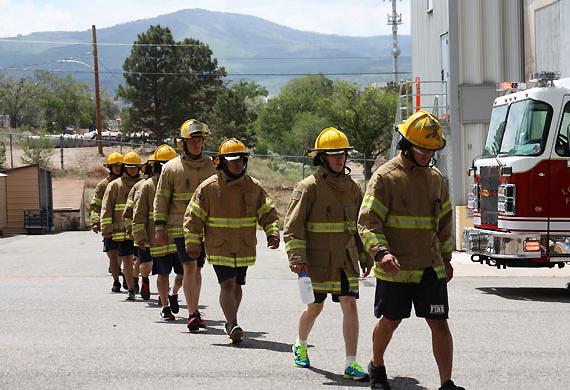 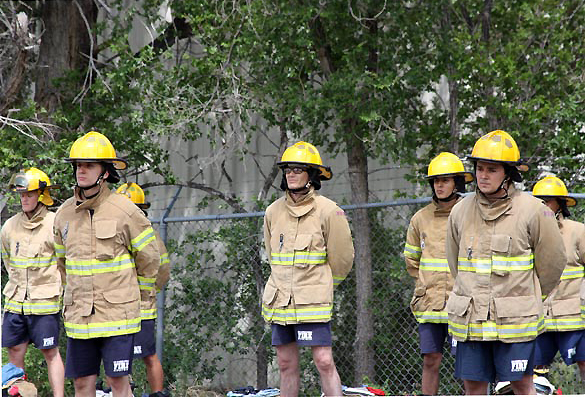 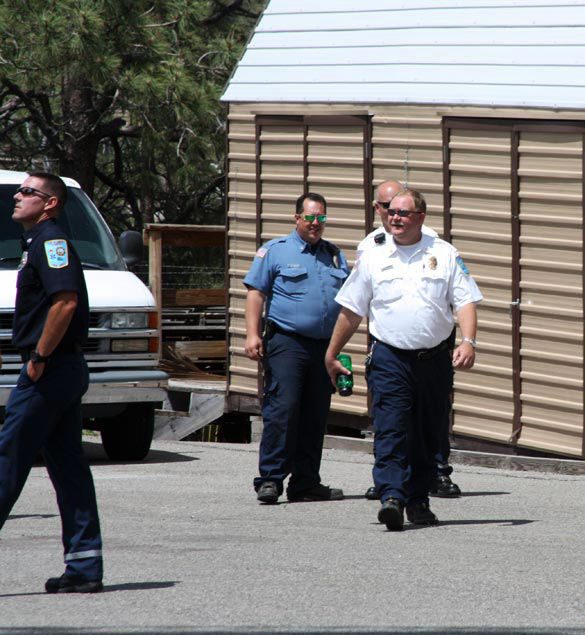