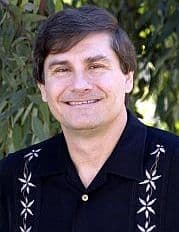 The lecture, “Dark Energy and the Runaway Universe,” is free and open to the public.

Filippenko has made a career of studying supernovae and using these cosmic beacons to probe the vastness of space.

Filippenko was a member of two independent teams that in 1998 reported, based on observations of supernovae, that the universe was expanding at a runaway pace.

The leaders of those teams received the 2011 Nobel Prize in Physics for the discovery.

Recipient of a Guggenheim Fellowship for his research, Filippenko’s skills in teaching and conveying scientific concepts to non-scientists has been recognized with the Carl Sagan Prize, the Richtmyer Memorial Award, and a Professor of the Year Award from the Carnegie Foundation.

Filippenko will discuss how observations of supernovae have led scientists to conclude the universe contains a repulsive force, dubbed “dark energy,” that forces space to expand at an ever-increasing rate, pulling galaxies and other matter along with it.

Einstein had once postulated such a mechanism but later rejected it and called it his “biggest blunder.”

Elected to the National Academy of Sciences in 2009, Filippenko is one of the world’s most highly cited astronomers.

He led the development of a robotic telescope that automatically searches for supernovae and for a decade was the world leader in finding those nearby.

He also collects observations with the Hubble Space Telescope and the Keck Telescope, two of the most powerful tools in astronomy.

He has undertaken a systematic look at the progenitor stars that end their lives as a supernova, an explosion of light and energy powerful enough to be seen at vast distances.

Supernovae are important because they seed the gas clouds that breed the next generation of stars and planetary systems with many of the elements found on Earth.

But also, as cosmological probes, they “may help us constrain theories that try to unite the two great pillars of modern physics: quantum mechanics and the general theory of relativity,” Filippenko says.

Filippenko’s lecture is sponsored by the J. Robert Oppenheimer Memorial Committee, a philanthropic, non-profit organization dedicated to honoring the memory and legacy of Oppenheimer, one of the most notable scientists of the 20th Century.