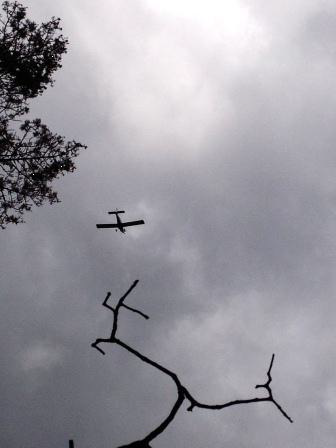 To promote forest regrowth, the BAER team is dropping five types of grasses from an aircraft at specific burn scar locations identified in an assessment.

The most productive aerial operations occurred Sunday, with six plane-loads of seeds getting dropped prior to afternoon rains. Five plane-loads were dropped Saturday and four Friday, for a total of 15 as of Sunday night. Each plane-load contains 4,400 pounds of seed.

The operations are continuing Monday and until 1,141 acres of public lands are successfully treated.

The air craft is staged at the Las Vegas, N.M. airport. Seed is loaded into the craft along with electronic mapping data. The pilot then flies over specified burn scar zones. A combination of five types of grass seed should sprout within a week and will promote immediate growth. Once sprouted, the grasses act as nursery, stimulating indigenous forest regrowth.

During the aerial seed drops, the BAER Team has eight inspectors on the ground monitoring and verifying the exact location and amounts of seeds being dropped. The aerial operations are currently limited to morning hours because afternoon monsoonal rains and winds prohibit flight.

Once the seed is applied, the next action is to apply straw mulch over specified forest areas. The mulch retains water, which aids in seed sprouting and slows water runoff. However, hydrology modeling indicates that many areas within or downstream from the fire burn scar will experience twice as much flooding for several years during annual monsoons.

There is a new fire on the Jemez Ranger District: The lightning caused Stable Fire is approximately 9 acres. It is burning near Stable Mesa approximately 1.5 miles east of Forest Road 376. Firefighters are engaged in suppressing this fire.
Closure Reminders:
The New Mexico State Police continue the Highway 63 closure within the Pecos Canyon, from mile marker 15 northbound. The Department of Transportation continues road work as warranted by flooding. Heavy equipment and BAER Team personnel are working within these areas. The Santa Fe National Forest recreation areas remain closed within the Pecos Canyon.
Menu
LOS ALAMOS