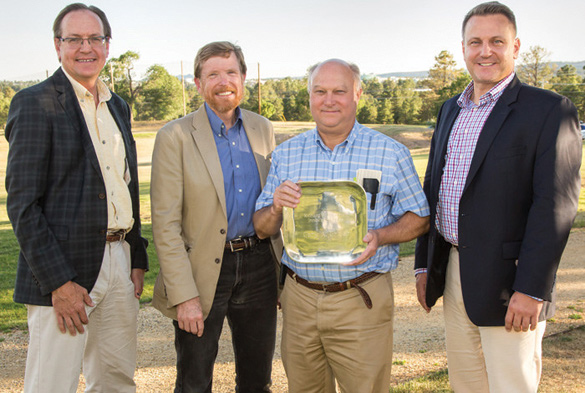 In addition, fellow Los Alamos National Laboratory researchers Youzuo Lin, Pulak Nath, Jennifer Harris and Scott Hsu were recognized for their compelling presentations earlier in the day during DisrupTech. That event featured Laboratory technical staff pitching their research to potential investors and explaining how it can translate into new disruptive technologies.

“Innovation is a critical part of our mission here at the Laboratory,” said Duncan McBranch, chief technology officer at Los Alamos. “Last year alone, principal investigators here disclosed 71 inventions, and the Lab filed 109 patent applications and 45 new copyright assertions. Innovation means converting these ideas into real-world solutions. Our goal with the Feynman Innovation Prize is to recognize a Laboratory innovator with a distinguished record for both ideas and the ability to demonstrate their use in a way that benefits both our mission and U.S. industry.”
2015 Richard P. Feynman Innovation Prize

From his post as High Performance Computing Division leader at Los Alamos, innovation prize winner Grider is a thought leader in the HPC storage community. He holds 12 patents and over 30 active patent applications in the area.

“Gary was a key contributor to two of the three dominant parallel clustered file systems in use today,” said McBranch in his remarks at the ceremony. “His development of the Parallel Log-Structured File System (PLFS) and the concept of a Burst Buffer directly impacts the performance of the Trinity machine, our premier supercomputer for modeling and simulation.”

PLFS and Burst Buffer concepts invented at Los Alamos are being deployed at many DOE extreme-scale computing sites within the next three years, as well as at large commercial HPC sites through products produced by Intel, Data Direct Networks, IBM and Cray. These concepts, which came directly from a Cooperative Research and Development Agreement (CRADA) with premier storage partner EMC Corp (EMC2), are considered base technologies that will eliminate barriers to exascale class computing.

New efforts led by Grider in the HPC field include prominent research under a CRADA with Seagate to investigate power-managed storage devices and software solutions for deep data archiving.

Currently Grider is designing the MarFS storage system—the first of its kind to make cloud-style object storage usable by legacy HPC applications and users by enabling normal file system access with the file and folder concepts of data on scalable cloud storage systems.

At the DisrupTech showcase earlier on July 14, six scientists presented pitches for five different technologies to a panel of industry experts. Youzuo Lin’s proposal to more accurately explore geothermal energy was recognized as “Most Fundable” for the technology’s ability to move forward in creating commercial value with $10,000 in technology maturation funds. Lin’s research provides a novel, machine-learning-based, multi-physics solution for an accurate characterization of the geothermal reservoirs.

In addition, Pulak Nath and Jennifer Harris, as a team, and Scott Hsu, individually,  received “Best Pitch” awards. Nath and Harris won for their presentation on the breathing “lung” bioreactor they have developed that aims to speed the time-to-market for clinical drugs and allow for more accurate medical testing. They tied with Hsu, whose proposal focused on developing nuclear fusion as a clean and powerful alternative energy source.

Other DisrupTech participants included Dylan Harp, who presented his research to evaluate the reliability of predictive models on rare events, and David Thompson, who shared his research that could revolutionize high-time-resolution, low-light imaging.

“Our staff demonstrated the breadth of amazing technical work at the Laboratory, and this contest gave them the opportunity to hone their pitch on how these exquisite technical approaches can translate into commercial innovations,” said McBranch. “They all demonstrated superb communication skills by engaging the audience’s imagination on deeply technical topics. They inspired strong questions and discussion and changed the thinking of many sophisticated investors with their presentations.”

DisrupTech sponsors include the State of New Mexico Economic Development Department and Technology Ventures Corporation as well as the New Mexico Start Up Factory II, Phase One Ventures LLC, Los Alamos Chamber of Commerce and the Regional Development Corporation.