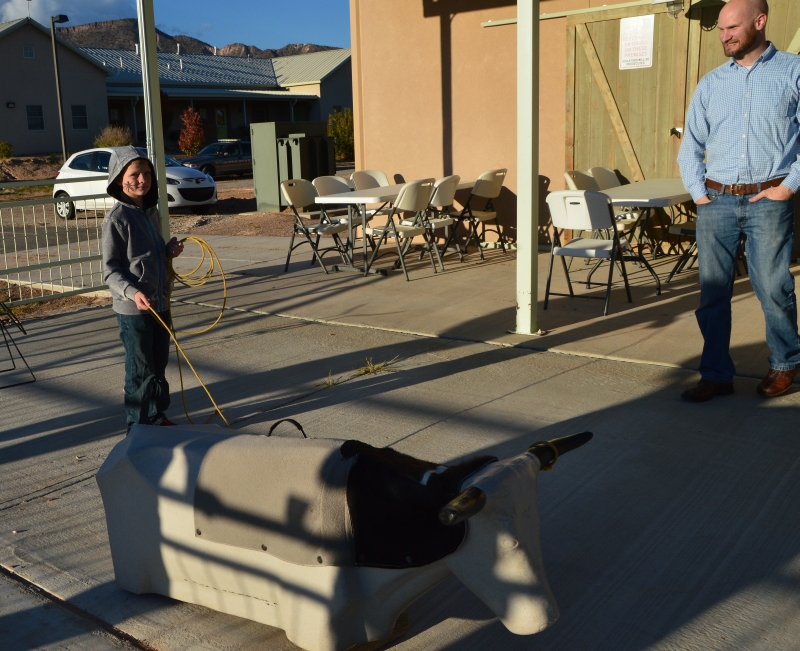 Parks, Recreation and Open Space Manager Randy Smith briefs Council during this evening’s work session at the firestation in White Rock and discusses a proposed fee increase for the North Mesa Stables. Photo by Carol A. Clark/ladailypost.com 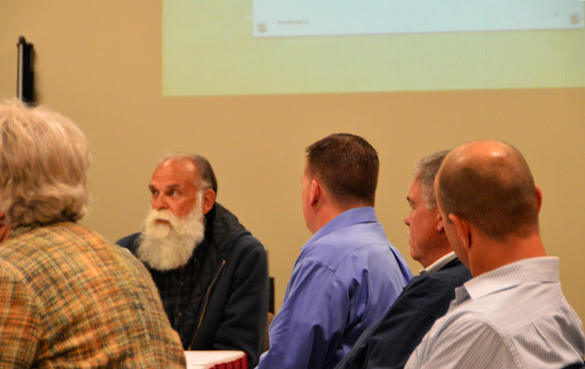 North Mesa Stables Board President David Carroll commends county staff for the job they have been doing with regard to the stables and interacting with stable owners. However, he added that if the county decides to increase fees, they should plan to find another purpose for the stables. Photo by Carol A. Clark/ladailypost.com

Los Alamos County Council leadership has requested that each Board, Commission or Committee chair make a presentation to the Council once a year focused on what has been completed and what they are working on, and what challenges or opportunities they see coming up in the future.

Parks, Recreation and Open Space Manager Randy Smith discussed a proposed fee increase for the North Mesa Stables. he explained that Parks Division staff review the stable licensing fees on an annual basis each November, in order to properly set the fees for the coming fiscal year.

The County Council last reviewed and approved an increase to the Stable’s license fees in 2010, he said, adding that the goal is always to find the balance between recovering the county’s direct costs associated with the services delivered, while keeping the fees affordable for the licensees.

The annual license fees are $400 for a large lot and $200 for a small lot, with a County administrative fee of $125 assessed per lot. However, the size of lots varies widely, with “small lots” a uniform 3,600 square feet each (with some licensees holding licenses to two lots), but larger lots ranging from approximately 6,000 square feet to more than 19,000 square feet.

Consequently, the Community Services Department looked at the possibility of coming up with a fairer system of assessing cost that would result in a more equitable distribution.

The two fee schedules were presented at the quarterly all-licensee meeting Oct. 1, 2014, and then sent out to all-licensees by e-mail for a “vote” of straight square footage v. tiered square footage. A total of 50 licensees of 97 total responded, resulting in 29 for the tiered method; 20 for the straight square footage, and 1 vote for either method. The fee schedule was then presented to the Parks and Recreation Board March 12, 2015 and received their unanimous approval.

The methodology used to establish the new proposed fees provides a more equitable relationship between the size of the lot and the annual license fee. Please note that staff is proposing a fee increase that covers the current direct costs for operating the North Mesa Stables. The additional expense labeled estimated county-wide is an indirect cost associated with general county overhead. For financial reporting purposes, we are required to report the actual costs of programs, which includes overhead costs such as payroll, IT, accounting. 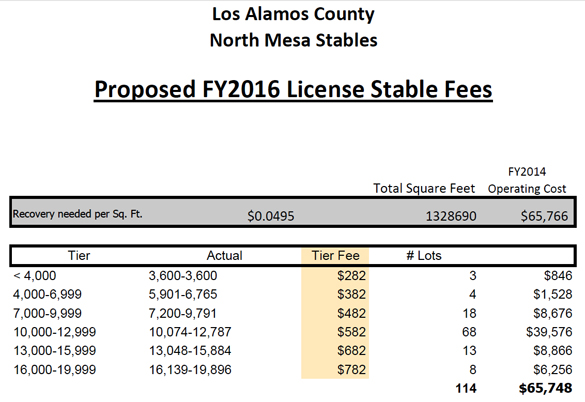 The Los Alamos County Parks, Recreation and Open Space Division operates and administers the North Mesa Horse Stables, which are located at the east end of North Mesa Road next to the Brewer, Dressage and Multi-Covered Arenas. The stables are comprised of 122 lots ranging in size from a large lot at one-quarter acre and a small lot at one-eighth acre.

Lots are available only to Los Alamos County residents who are required to sign a License Agreement through the Parks Administration office in order to occupy a lot(s). A two lot maximum applies.  The annual Maintenance Fee for a large lot is $400 and the Maintenance Fee for a small lot is $200. An Administrative Licensing fee also applies per lot annually or at the time a lot is re-licensed to someone else.

Any improvements to a lot such as structures or fencing are individually owned by the current licensee occupying the lot. Whenever a licensee wishes to vacate a lot, notice is given to the Parks office that the improvements are available for sale.

The Parks office maintains a listing of lots that are available at any given time along with a list of residents interested in a lot. Parks will notify those on this list by email anytime a new lot becomes available. The prospective new Licensee may contact the seller to negotiate terms for the purchase of the improvements. Once terms are met, the lot can be re-licensed through the Parks office. The purchase of improvements on a lot will be filed with the County Assessor’s Office through the Parks Administration office.

For additional information regarding the process for obtaining a Stable Lot or to obtain copies of the Licensing Agreement and the Stables Rules and Regulations, contact Roxie Mascarenas at  505.662.8159. 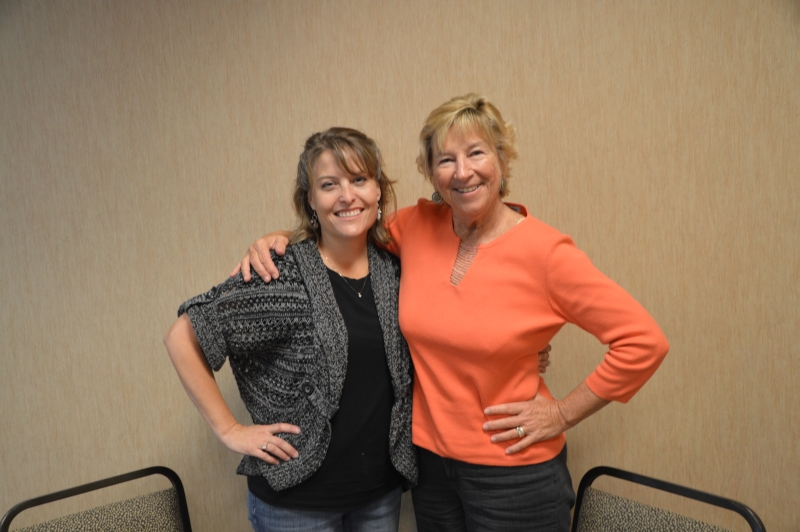 Members of the public and various county staff members attend this evening’s council work session in White Rock. Photo by Carol A. Clark/ladailypost.com 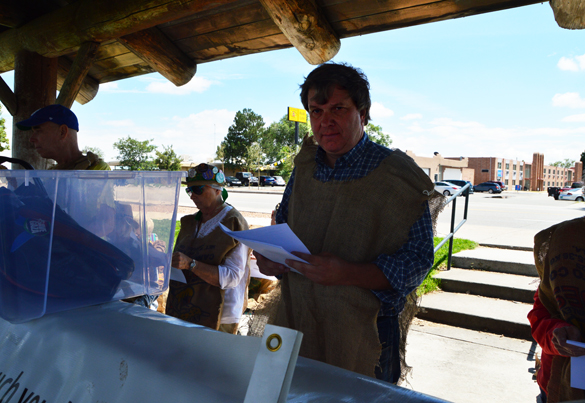 Councilor Susan O’Leary asks some clarifying questions of Parks, Recreation and Open Space Manager Randy Smith about the fees at the North Mesa Stables. Photo by Carol A. Clark/ladailypost.com 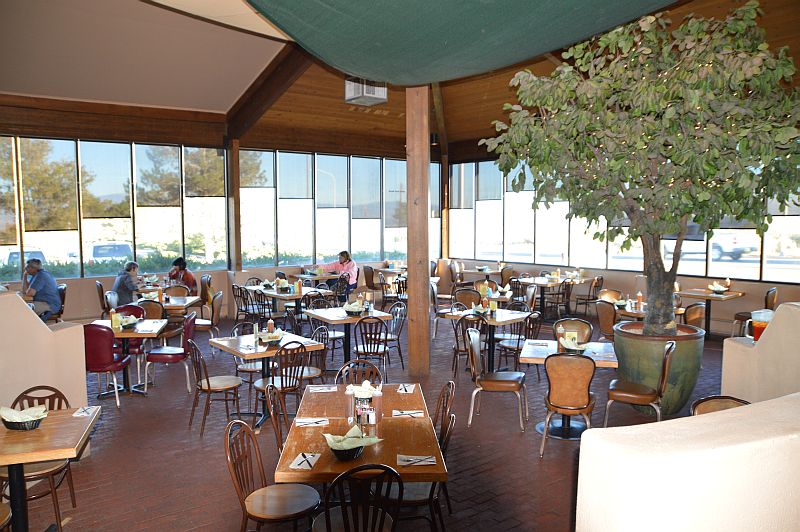