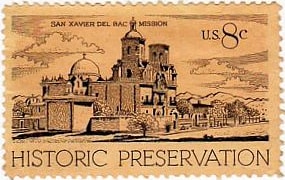 Image: Sample of a U.S. Postal Service stamp that has a picture of “San Xavier Del Bac Mission” and the title “HISTORIC PRESERVATION” across the bottom. Courtesy

UPDATE: Tonight during an interview with Jemez Springs Mayor Edmond Temple, he said Bill Hutchinson of the New Mexico Department of Transportation (NMDOT) had previously informed him that the feds would not permit artwork depicting crosses be attached to two new bridges in the village. The censorship story broke this afternoon and Temple said this evening that NMDOT is now saying the issue isn’t the crosses at all but rather the ongoing maintenance of that artwork.

“It’s a safe highway (N.M. 4) and they (NMDOT) agreed to the art project nearly two years ago … now to suddenly have a maintenance problem on the cusp of issueing an RFP for the work … does the left hand not know what the right hand is doing over there … ?,” Temple said.

A firestorm is brewing in neighboring Jemez Springs that has got Rep. Jim Hall writing a letter of protest to the New Mexico Congressional Delegation in Washington, D.C.

“I think this is in no way an attempt to foist religion on anyone, rather it is recognition of the historic role the Catholic Church has played in Northern New Mexico and furthermore, the buraucrats in Washington seem unable to recognize this distinction,” Hall said during an interview this afternoon.

Jemez Springs Mayor Edmond Temple explained in an email Monday to New Mexico officials including Hall that the New Mexico Department of Transportation will shortly be replacing two bridges in the Jemez Springs Village of which federal dollars are involved.

There will be eight 28-inch-by-14-foot panels on these two new bridges.

The mayor explained that more than one year ago his office conducted a juried art contest and a local artist won.

The winning design for the panels will show in bas relief, images of historical cultural content.

At the last minute, the federal government has stepped in and said the crosses on the panel must go.

Hall said that Temple was scheduled to be interviewed by KRQE at 3 p.m. today about this situation.

The mayor wrote the following email to Bill Hutchinson of NMDOT, who delivered the censorship news about the crosses to him:

After some thought I have to say that I found the whole exercise of revising and censoring the jury selected art piece both incredible and an example of PC’ism run amok.

Bill, I realize you were just the messenger, but I think I have to do more than roll my eyes.

Please send me your mailing address and I will send you a U.S. Postal Service stamp that has a picture of “San Xavier Del Bac Mission” and the title “HISTORIC PRESERVATION” at the bottom.

The stamp demonstrates that religious images can be used in a historical as opposed to a religious context and that our Federal government has done so!

I am requesting that this stamp be shown to those individuals who said the crosses must go.

I am also asking for a written explanation of why the historical and cultural intention of the piece is being ignored for an overly rigid separation of church and state regarding these crosses.

This makes little sense given the purpose of the piece — to capture the historical cultural context of the canyon as seen at the Jemez, New Mexico State Monument, which is located less that 100-feet away from the second bridge.

The Monument contains the ruined Mission depicted in the art work. The art piece was in part intended to compliment the Monument.

Perhaps if this had been made more clear to the feds from the outset, we could have avoided this fiasco.

Bill, I am simply flabbergasted by this episode, especially at this late date.

As Mayor I am requesting that the individuals responsible for this decision provide the Village with a written explanation for their actions.

While it is said that the winners get to write history, does the 1848 Treaty of Guadalupe really mean that federal bureaucrats can erase our canyon’s pre-1848 history?

It is disappointing to think how this politically correct behavior fits so perfectly with the re-writing of history as depicted in Orwell’s 1984!

Mayor
Editor’s note: Hall told the Los Alamos Daily Post that he intends to write a letter tomorrow to all of the members of the New Mexico Congressional Delegation expressing his disagreement with this issue.
Menu
LOS ALAMOS