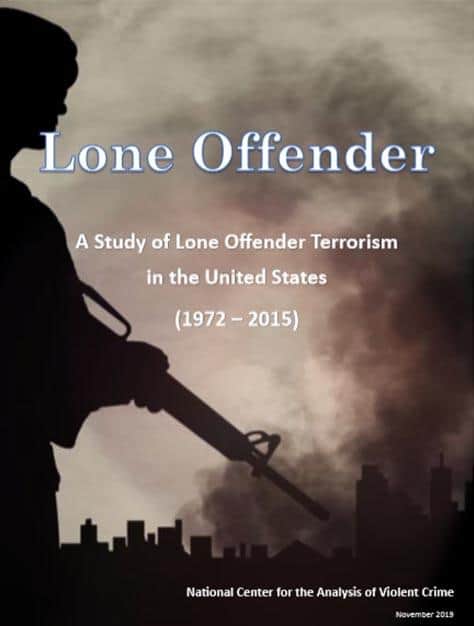 The study, reflecting BTAC’s focus on past terrorism and targeted violence events, reviewed 52 lone offender terrorist attacks within the United States between 1972 and 2015.

BTAC is a national-level, multi-agency, multi-disciplinary task force focused on the prevention of terrorism and targeted violence through the application of behaviorally based operational support, training, and research. The task force conducts research in order to learn from past events, enhance and improve future prevention efforts, and provide training opportunities.

The FBI says that the BTAC study compared numerous offender motivational factors encompassing their backgrounds, family and social networks, behavioral characteristics, radicalization, attack planning, and bystander observations. The study focused on offenders who carried out their attacks independently of any direction from a terrorist group or organization.

“Through BTAC’s extensive experience working threat cases, the FBI was well-positioned to analyze the study materials through an operational lens and offer observational recommendations based on BTAC’s findings,” the FBI added. “Data from FBI case files and other law enforcement records, including some classified materials, also contributed to the richness and quality of BTAC’s review and subsequent report. Because of BTAC’s operational approach, looking beyond the mere numbers, the research team was able to identify and articulate substantive suggestions and considerations to improve prevention efforts.”

The FBI notes, however, that prevention is more than just a law enforcement effort. “Law enforcement is working diligently to improve its collaboration and coordination with other government entities, community mental health and social services, probation and parole, educators, and private sector partners to appropriately share information necessary to further assess the threat and to take action to mitigate the threat,” the FBI says.

The report says that prevention efforts are enhanced by the early recognition and reporting of suspicious behaviors by those individuals around a person of concern, such as family members, peers, or other community members. Bystanders need guidance to recognize concerning behaviors and overcome natural resistance to reporting.

The lessons BTAC learned from the study revealed similar findings from other past FBI and academic research on pre-attack behaviors, stressors, and risk factors exhibited and experienced by previous attackers. The BTAC discovered that while the attackers in the study were ideologically motivated lone offenders, they were rarely completely isolated and alone. The report also found that while predicting lone offender terrorism is not possible, it may be preventable with increased bystander education and awareness in recognizing concerning behavior and reporting it to authorities as soon as possible.

“The FBI’s research in the Lone Offender Terrorism Report is an invaluable tool not only for the FBI but for our law enforcement partners and other multi-disciplinary threat assessment teams,” said Assistant Director John Selleck of the FBI’s Critical Incident Response Group. “It is also our goal that this report successfully enhances the public’s education and awareness of these types of attacks. By closely studying past lone offender behaviors and sharing the findings, we enhance our collective efforts to prevent future attacks and save lives.”